Cuba is a prodigal land for jazz. Historically, the island’s instrumentalists have triumphed on the world’s most relevant stages and have exerted a remarkable influence on generations of musicians both in Cuba and around the world. 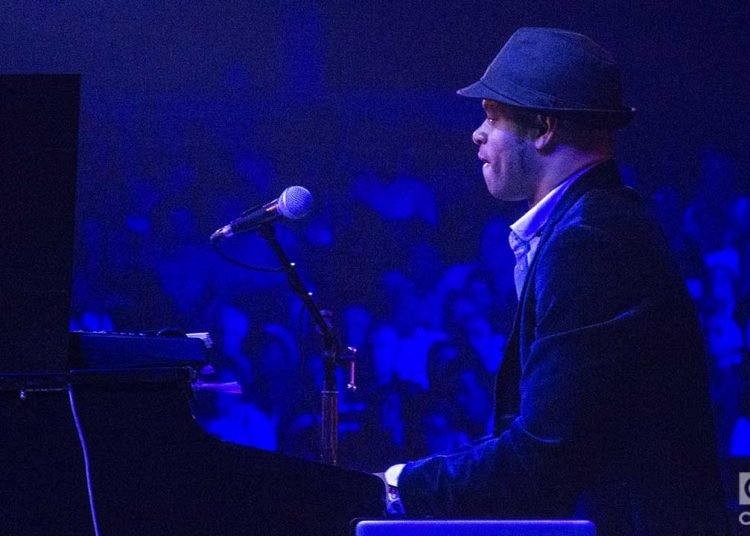 Cuba is a prodigal land for jazz. Historically, the island’s instrumentalists have triumphed on the world’s most relevant stages and have exerted a remarkable influence on generations of musicians both in Cuba and around the world. There is currently a thriving Cuban jazz scene represented by greats from the most diverse generations that converge and keep the country at the forefront of the genre. We propose a brief tour around the instrumentalists who have marked the evolution of Cuban jazz. The list is a work in progress because it’s impossible to summarize the contributions Cubans have made to the multiplicity of styles that coexist in that beautiful universe of jazz. 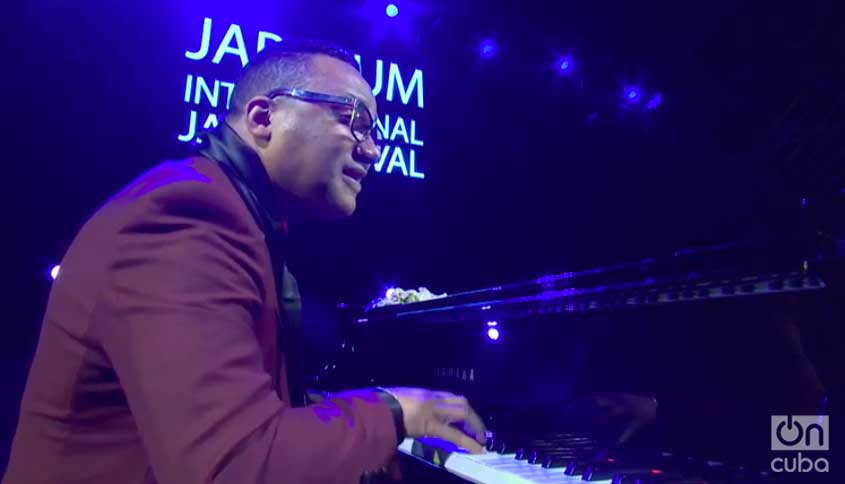 Gonzalo is at the top of any list of the best Cuban jazz players. With an extremely refined technique, and a unique style defined by his interest in deepening tradition from a contemporary perspective, Rubalcaba was “discovered” in 1982 at just 21 years old by the jazz star Dizzy Gillespie during a concert at the Parisien cabaret club. The American took the stage and invited Rubalcaba to accompany him at the concert he had planned at the Havana Jazz Festival.

Mere months later Rubalcaba had a contract with the label Blue Note and his music began to be known internationally. A four-time Grammy winner with 16 nominations, he is already a household name in the history of Cuban jazz. He recorded one of his most recent albums, Trance, with Chucho Valdés.

The pianist, established in the United States, has been touring with Cuban singer Aymée Nuviola for months, with whom he created the Viento y Tiempo project. In 2011, Rubalcaba offered a master concert at the Havana Jazz Festival after almost a decade away from the local concert circuit. Since then, he has performed in Cuba several times in recent years. 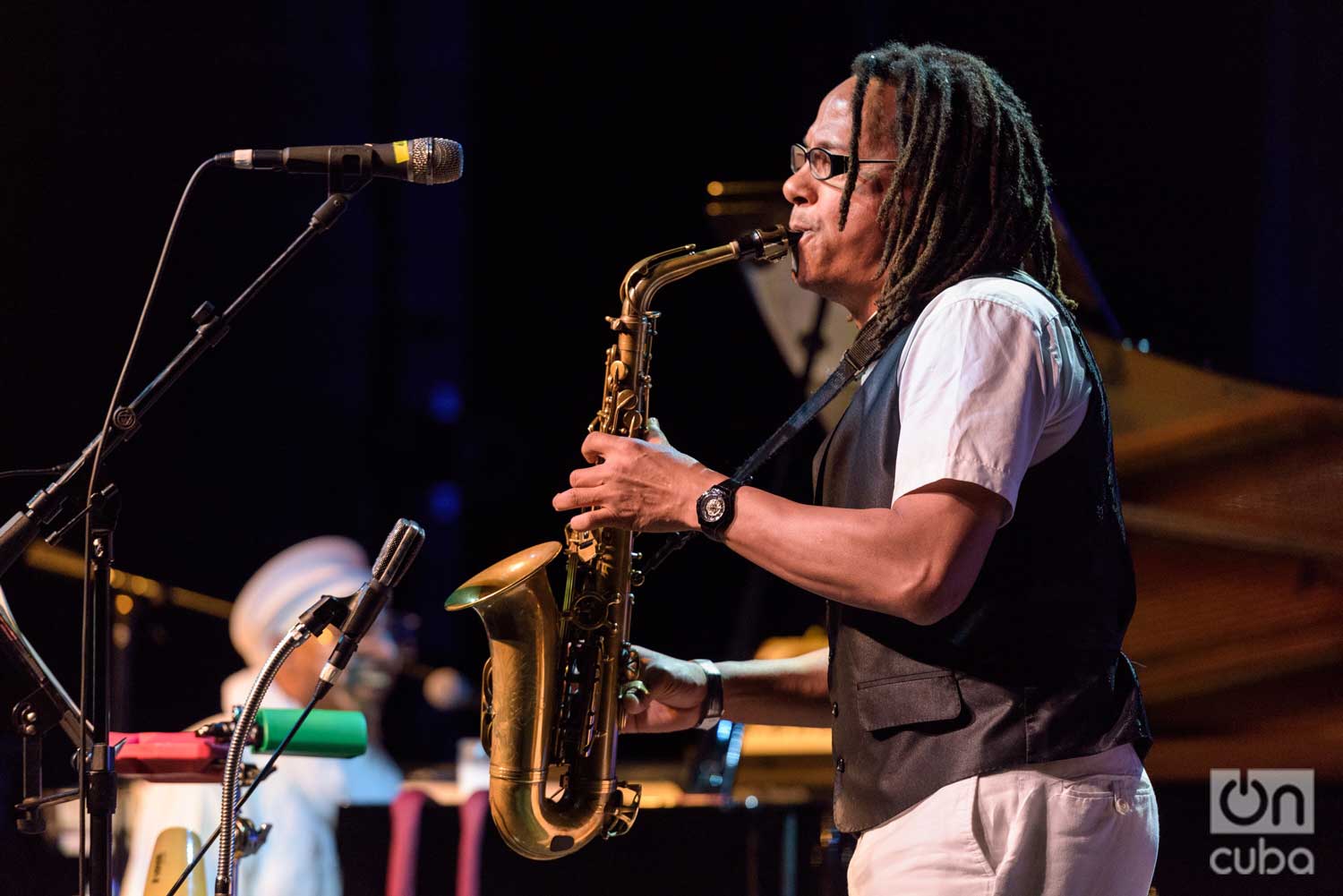 Music critics tend to label styles or compare one musician with another preceding one. Omar Sosa has not escaped this, and in fact, the Cuban instrumentalist is placed somewhere between Thelonius Monk and Eddie Palmieri. In truth, any jazz fan would agree that he occupies a privileged position, given the contributions of those American jazz players.

That said, Sosa has managed to give body to his own discourse within the complex terrain of jazz and today is a top musician on a global scale. He has wisely borrowed influences from here and there to give life to a syncretic work at the intersection of jazz, rap, and rumba, while respecting the imprint of African sounds in American music. His organic approach has earned praise at jazz gatherings around the world. He is a kind of researcher of music from across the planet, taking from each culture what it can contribute to his sound.

As proof of his philosophy, Sosa has bequeathed a phrase that speaks for itself of his position regarding life and society: “I believe more in the strength of our ancestors, in our roots, than in politicians. Although politics can also be expressed through music.” 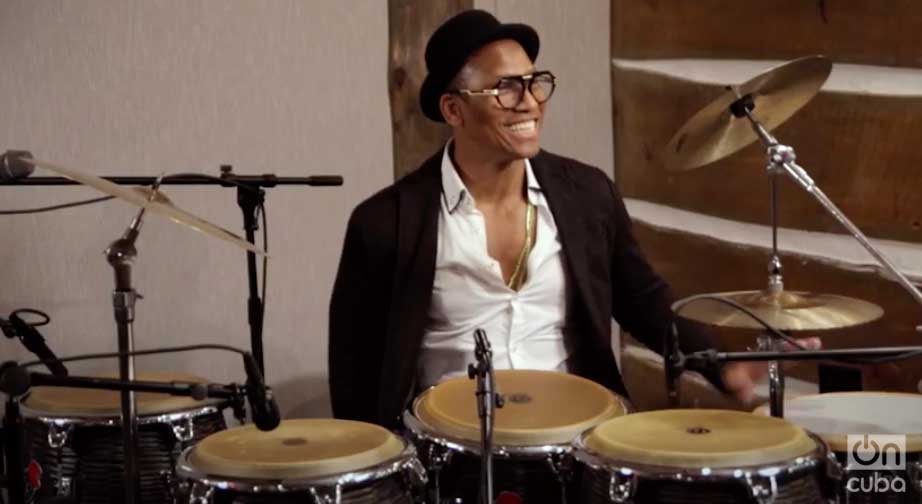 Bruce Springsteen and Sting helped him expand his career internationally after emigrating to the United States where he joined the Yerba Buena group, nominated for a Grammy for its album President Alien. This is just one of the credits attributed to Pedrito Martínez, a top Cuban percussionist on the world jazz circuit who has brought his music to the most prestigious stages on the planet and has graced the pages of many jazz publications that have spared no praise. His work is at the crossroads between Afro-Cuban music —the religious elements that are used in the rituals of Santeria— and jazz, understood from its broadest conceptualization.

Stars like Paul Simon, Sting, and Wynton Marsalis have solicited his services and the instrumentalist has passed the test with outstanding marks. With his own group, he has put out albums including Rumba de la isla and Duologue (with Alfredo Rodríguez).

Among his records, Habana Dreams, an album recorded in 2016 at the EGREM studios in Havana, stands out. It placed at the top of Billboard’s list of tropical albums and the recording includes collaborations with Rubén Blades, Isaac Delgado and Descemer Bueno. But for him the most important thing about this album was the possibility of reuniting and working with his three brothers, all percussionists living on the island.

Roberto Fonseca has just recorded his fifth album, Yesun, which is the coronation of a musician on the altars of jazz. The album brings together the different paths taken by the leader of Temperamento, for whom the genre has had a strong experimental component. This mixture of elements also appears in his previous albums: ABUC, Akokan, Zamazu, and Yo.

With his group Temperamento —which includes the outstanding flutist, clarinetist and saxophonist Javier Zalba— he has planted the Cuban jazz flag in the most prestigious arenas, to great acclaim and excellent reviews for their originality in concert.

Based in Havana, Fonseca has managed to internationalize his work in which he continuously pays tribute to his African origins, to the roots that have led him to tour the world without detaching himself from his cultural heritage. In Fonseca’s hands, Cuban jazz has found a well-paved road to evolution. The pianist, 44, is a specialist in so-called World Music and has been able to combine his creative curiosity with his masterful interpretation of jazz. 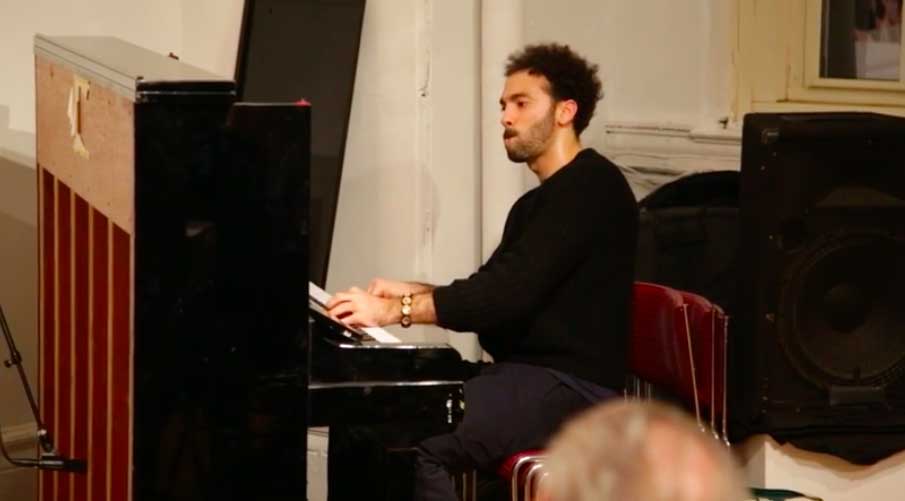 The New York Times recently offered this profuse praise of David Virelles: “Virelles is a Cuban-born pianist who uses understated dissonance and darkness to interrogate — and, sometimes, explode — the sacred traditions of his home country.”

Born in Santiago de Cuba into a family of artists headed by his father (the trovador José Aquiles), 35-year-old Virelles, based in New York City, has achieved great resonance in the diaspora. His album Continuum was ranked among the best jazz records in the United States in 2010 and The New York Times placed him at the top of the list. Four years later his album Mbòkó was listed among the best of 2014.

His skill, ability and imagination have attracted the attention of jazz greats in the United States, where he has resided for more than a decade. Virelles is a kind of esthete of sound creation: the listener can be captivated by the sense of experimentation that jazz holds for this proven instrumentalist from Santiago. 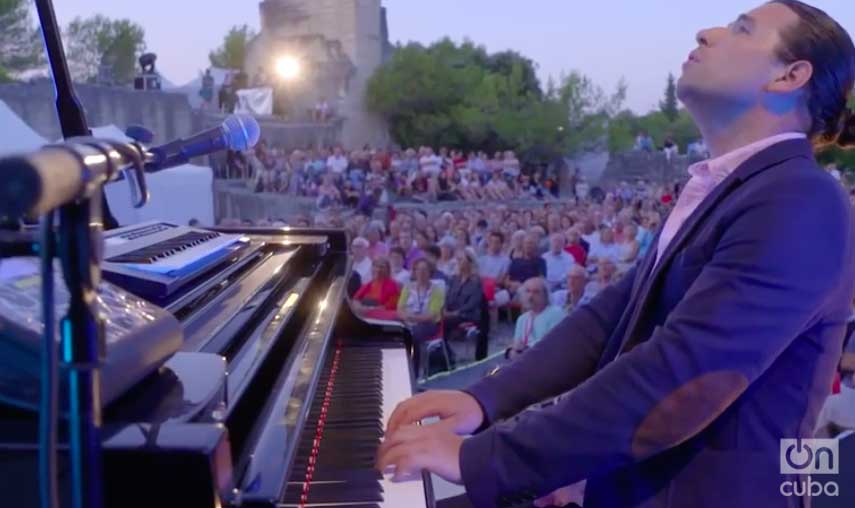 Alfredo Rodríguez made the great leap onto the international jazz scene thanks to the legendary Quincy Jones. The American producer saw him perform during a festival in Switzerland and extended an invitation to come to the United States, where he has shaped his career at a vertiginous speed and has recorded albums defined by the experimentation between jazz and music from different cultures worldwide.

Among his recordings are Sounds of Space, Invasion Parade (nominated for a Grammy in 2015), and Tocororo and the Little Dream, recorded under the label Mack Avenue Records. The 34-year-old pianist based in Los Angeles returns frequently to Cuba to visit his family, but has not obtained the permits necessary to offer a concert on the island.

Alfredo Rodríguez, who is currently touring with aforementioned percussive genius Pedrito Martínez, has graced several of the most relevant stages on the planet to perform alongside jazz heroes Herbie Hancock and Chick Corea, among others. However, the idea of performing in Cuba remains an unfulfilled dream.

Yissy is a jazz player with a conscience. Knowing that there are far too few women within the genre, the percussionist has managed to occupy an important place within the complex black-roots-style scene. Yissy, with her group Banda Ancha, has developed a repertoire worthy of attention for its mix of jazz with electronic rhythms and popular Cuban music.

The result is a sound that is organic, free, and that breaks down any type of barrier that may exist on the island’s music culture. Her talent behind the drum set and her ingenuity, together with the expression and experimentation of another of the group’s mainstays —the artist from Santiago known as DJ Jigüe—, Banda Ancha has accumulated enough merit to be considered one of the paradigms of Cuban contemporaneity. 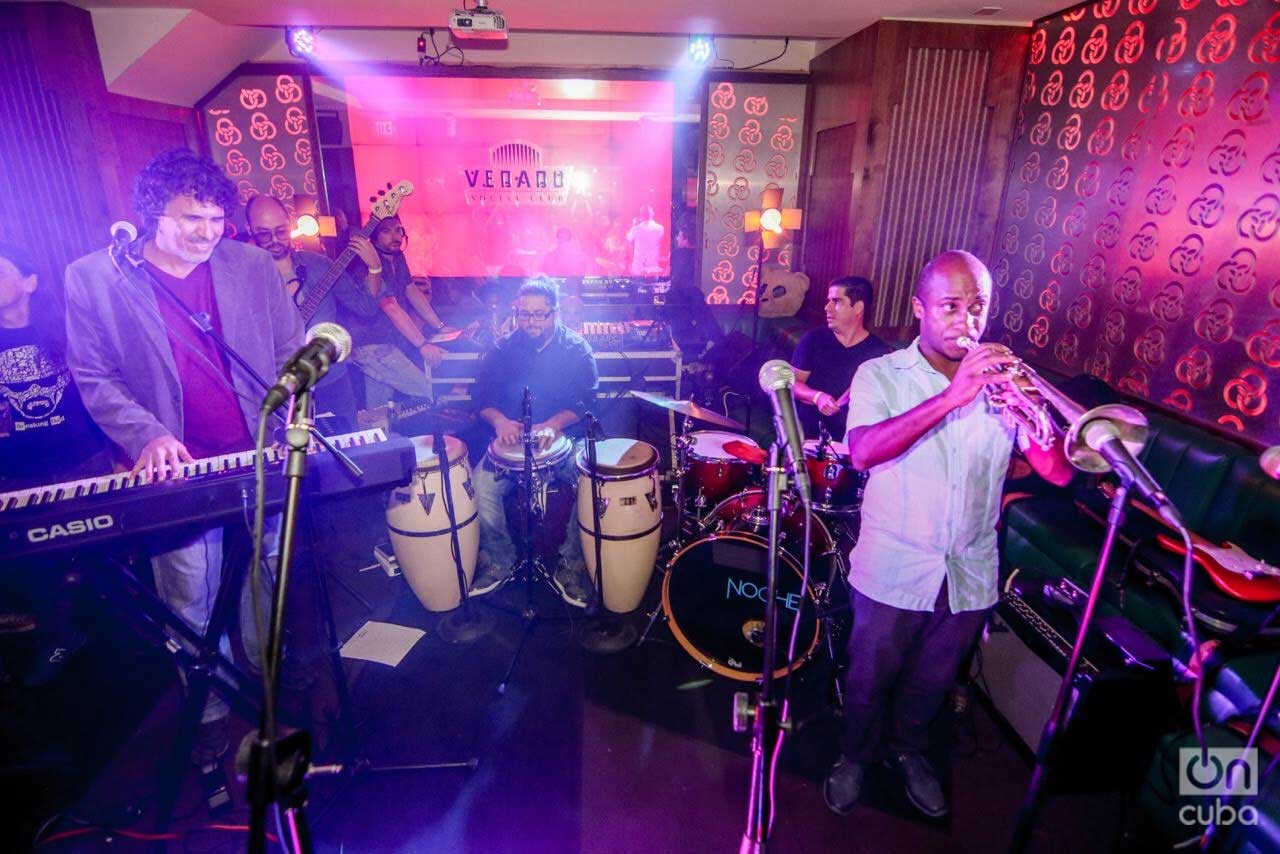 Interactivo forged a new path for contemporary Cuban music. The iconoclastic band has pioneered the fusions that began to appear on the island scene two decades ago. Its leader, the pianist and composer Roberto Carcassés, has declared that they make “Timba Funk,” a style that summarizes the creative impetus of all the musicians who have passed through the band and that today still form the musical community that is Interactivo.

From the beginning, Carcassés set out to strengthen and expand the ties between jazz and Cuban popular music. For the son of another great Cuban musician, Bobby Carcassés, there’s no music that the collective hasn’t played. Robertico (to his friends) is a pianist who views Interactivo’s music from a democratic and participatory conception in which all the members of the group have something to say and to contribute.

Hence, with this pure form of participation, a sound emerges that identifies the Cuban music of the new millennium and puts it face to face with its most universal expressions. Goza pepillo, Cubanos por el mundo, Interactuar es una fuerza and Libre are four of the iconic records that are key to understanding Cuban music from this century.