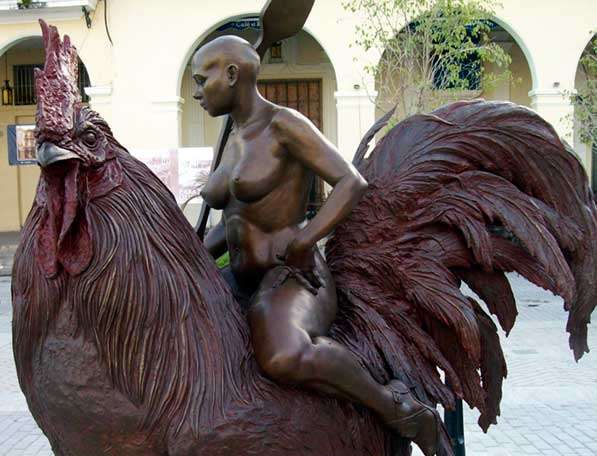 A few hours ago in the ancient Old Square of Havana a monumental work of Roberto Fabelo was placed. The figure, made of bronze, was donated by the 2004National Arts Award winner to the historic center of the capital.

On an impressive defiant looking rooster, a human-sized woman rides holding in her right hand a giant fork. The voluptuous rider is naked and only wears closed shoes, but she is not ashamed to show her body to all passersby. She looks serene and thoughtful on top of that animal that has obviously managed to tame, perhaps with her charms or perhaps using the fork occasionally.

We still do not know what the name of this work is. But the fact is that only a few years Old Havana has been filled with sculptures that beautify their surroundings: the Knight from Paris, Mother Teresa of Calcutta, Antonio Gades, Frédéric Chopin … and also, a few months ago, two abstract figures: “the Conversation”, symbolizing two people in a deep and pleasant dialogue in the Plaza de San Francisco de Asis and “Natura” which refers to a huge flower that is born in the cobblestones of Old Town Square.

And now, in the same place, we found this woman who rides on the back of her cock. Perhaps it reminds us that the female is able to tame even the bravest with her charms. Although we can interpret that the fork is inviting us to enjoy the cuisine of Old Havana, or the restaurants that are in the Square, as the Holy Angel, Café Escorial or the Plaza Vieja Brewery….

On this new work the City Historian Eusebio Leal, said that shortly after placement, “Astonished passers began arriving and walked around the rooster and the figure that’s on top of it. Children, too naive, tried booting some feathers, as if the bronze yield to their desires, others wanted to ride with the effigy, others stroke it to see if it was real. Some people told me, “you will have to put a fence around the sculpture”, but I said no, I rather meet with all the children in the Plaza and tell them about the rooster and on its magic. ”

From those stories we tell you in OnCuba later, for sure. Now it only remains to invite you to enjoy the sculpture and if you can take a photo with her, then do not hesitate: this naked woman holding a fork and riding a rooster will become another symbol of Havana and Cuba.

Of Reggeaton and other demons…

The list made by VM32, the Classic and my hesitation