Cuba in Obama’s final State of the Union address 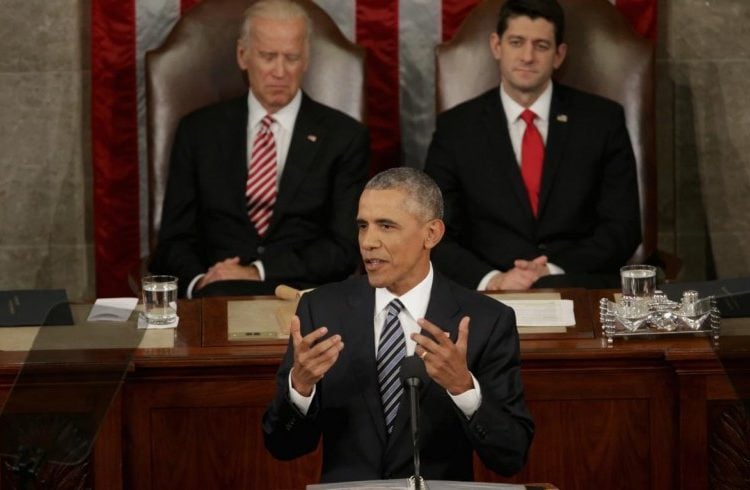 “You want to consolidate our leadership and credibility in the hemisphere? Recognize that the Cold War is over. Lift the embargo,” said President Barack Obama in reference to Cuba in his final address on the State of the Union.

Obama also mentioned the island nation in his review of the accomplishments of the foreign policies of his Administration:

“Fortunately, there’s a smarter approach a patient and disciplined strategy that uses every element of our national power.  It says America will always act, alone if necessary, to protect our people and our allies; but on issues of global concern, we will mobilize the world to work with us, and make sure other countries pull their own weight.”

Once again, he pointed out that the policy toward Cuba had not only affected bilateral relations, but the image of the United States in the region.

“Fifty years of isolating Cuba had failed to promote democracy, setting us back in Latin America.  That’s why we restored diplomatic relations, opened the door to travel and commerce, and positioned ourselves to improve the lives of the Cuban people.”

But it’s not hard to imagine that his plea for the lift of the embargo won’t be heard in Congress, as a recent vote taken at the House of Representatives to sabotage the economic rapprochement between the two countries showed.

The businesspeople who have been visiting the island –including the Governor of Viriginia, Terry McAliffe, who visited the country in early January- must have realized by now that the embargo is a major obstacle in the plans to expand trade between Cuba and the United States.

In December 2015, senators Jeff Flake (R-Ariz.) and Patrick Leahy (D-Vt.) sent a letter to the White House encouraging the administration to advance actions in 2016 to further expand engagement between the two countries.

“The coming year represents a critical opportunity for meaningful advancement of these objectives.  Removing statutory limits on travel and trade will require Congressional action.  However, within the finite time remaining, continued progress in the regulatory arena represents the best strategy for resilient changes in the U.S. and Cuba as well as increasing the prospects that Congress will act,” wrote the senators.

In the letter, they outlined a series of actions to be taken in order to advance in what they are requesting, namely, the lead of the multi-agency effort, the completion of a bilateral air services agreement, the streamlining of people-to-people travel, the increase of exports of U.S. goods, the expansion of exportation of U.S. services, the facilitation of financial transactions, and the settlement of claims.

Experts and Cuban officials have also pointed out the shortages of the current extent of the relation between the two countries.

Foreign Relations officer Josefina Vidal, the head of the Cuban team that negotiated the rapprochement with the United States, said recently in an interview:

In a speech in late 2015, Cuban President Raul Castro said that the most important at this point is that President Obama uses his ample executive power to reform the implementation of the embargo. This, he argued, is the way to make progress.

A Cuban migrant's journey from Central America to the USA