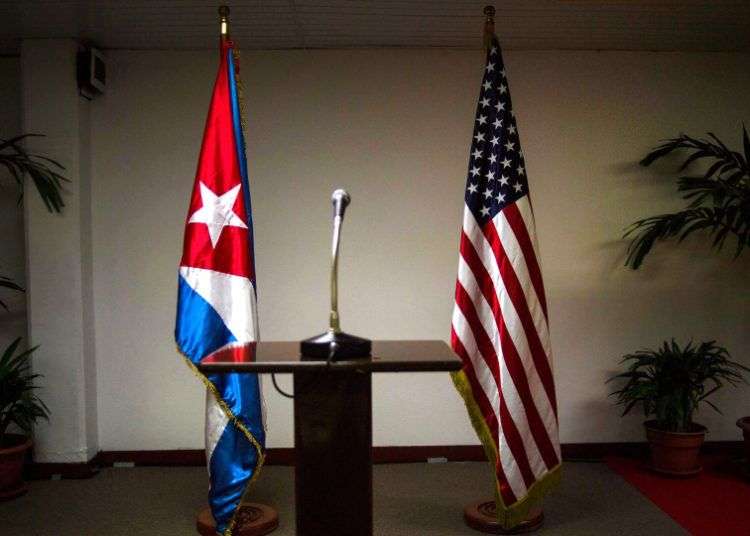 Che Guevara was the first to approach the United States to propose an improvement in bilateral relations, in Uruguay, 1961, according to the latest book by Esteban Morales and Elier Remirez “Cuba – US Relations: From Confrontation to Normalization Attempts”.

Washington misinterpreted the proposal, thought that it was seeing differences within the revolutionary government and, instead of replying, wasted its time trying to find the crack in the leadership where it could drive a wedge between the rebels.

The affair didn’t end well. The Argentinean Foreign Minister was sacked for aiding in the gathering, while Kennedy advisor Richard Goodwin, who met with Che Guevara, became a suspect and was subjected to a Senate investigation.

Today, negotiations between the two countries have been set in motion by the US president himself. Everyone knew the economic blockade had failed, but Obama was the first to publicly acknowledge that the strategy would not succeed in overthrowing the Cuban government.

In addition, US negotiator Roberta Jacobson recognized that the embargo “isolated us from our democratic partners in the hemisphere and the world.” Europe votes against it at the UN and Latin America demands that Cuba participates at all regional gatherings.

Havana was invited to take part at the next Summit of the Americas (April 10-11), despite the White House’s opposition. Obama was left with only two options: to begin negotiations with Cuba or not to attend the gathering and give the floor entirely to the Cuban president.

In the Thick of Negotiations

Roberta Jacobson asked that the diplomats of the future US embassy be allowed to maintain the same relations they have with dissidents today.  Photo: Raquel Perez

As was to be expected, each of the two countries is trying to get as much out of the negotiations as they can at the lowest political cost.

The US administration seeks to improve its image in the region and favor its economic interests.

The idea seems to be aimed at allowing US entrepreneurs – oil and telecommunications companies in particular – to do business with Cuba, while Washington continues to offer Cuban dissidents political and financial support.

Mrs. Jacobson – probably under political pressure from her country – showed her cards at a press conference held in Havana, stating that Washington would employ a new tactic to pursue its aims of old.

The reply came quickly. Cuban negotiator Josefina Vidal demanded that US diplomats cease to “encourage, organize, train, supply and finance” the opposition, while President Raul Castro demanded that the territory occupied by the Guantanamo Naval Base be returned to the country.

Despite all this, Havana needs to negotiate. A World Bank executive recently announced that the normalization of relations could increase foreign investment on the island from US $1 billion to $17 billion.

Removing Cuba from the list of countries that sponsor terrorism will eliminate part of the financial pressure on the country, and the repeal of the law that bars US citizens from traveling to the island as tourists would double the global number of visitors and the revenues of that industry.

If Washington makes rapprochement dependent on political changes in Havana, negotiations will come to a dead end, as has happened before. Josefina Vidal has already told the US that Cuba’s sovereignty and internal political structure “are not negotiable.”

Cuban President Raul Castro demanded the return of the Guantanamo Naval Base. Washington immediately replied that the status of the base is not negotiable.  Photo: Raquel Perez

Negotiations will also stall if Havana makes the lifting of the economic embargo the condition for talks, as it has done on other occasions. If there is any hope of dismantling the blockade, it is precisely through negotiations.

The press frames the issue of human rights as one of the big debates, despite the fact that both governments know no agreements will be reached in this connection. Cuba is just as unlikely to accept the activities of dissidents as the US is to commit to eliminating police brutality.

Some politicians from the Cuban émigré community demand that Havana hand over fugitives from US justice like Joanne Chesimard, aka Assata Shakur, an African-American woman who was a Black Panther leader and is sought by US authorities for the murder of a police officer in the 1970s.

They seem to be unaware of the fact that an extradition agreement is reciprocal and would force the United States to deport many Cuban exiles accused of crimes, including Luis Posada Carriles, sought for the bombing of a Cuban commercial airliner that killed 73 people.

Economic demands constitute another hurdle. According to data from the US Treasury, there are some 5,900 suits stemming from US properties nationalized by Cuba, for a total value of some US $7 billion.

When this issue is placed on the table, however, Havana will likely demand to be compensated for the damages caused by the economic blockade and terrorist actions, valued by Cuban courts at around US $121 billion.

Josefina Vidal and Roberta Jacobson also need to keep multilateral issues (such as Havana’s alliance with Venezuela and Moscow) off the table, as discussing these would be as crazy as debating about the Pentagon’s actions in Pakistan, Syria, Iraq or Afghanistan.

Understanding one another is a complex matter when the two parties have very different conceptions about human rights, highly divergent political systems, a vision of democracy without any common ground and politicians who believe they have the best social order in the universe.

As the secret meetings demonstrate, focusing on bilateral relations and areas of common interest appears to be the surest way of making progress. The two countries know this work, but pressures have been on the rise since December 17.

What’s novel about these negotiations in comparison to previous attempts is that the two governments have sat down to talk without establishing any prior conditions, on the understanding that exchanging points of view is the beginning and not the end of the road.

Raul Castro and Barack Obama have boarded a ship built in utmost secrecy over an 18-month period. They are sailing through turbulent waters and torpedoes are being fired at them from both coasts. If they manage to lead this ship to a safe harbor, they will have left behind a truly historical legacy.

Bill Against Embargo Introduced at US Senate

Cubans who shone the most in Winter Leagues