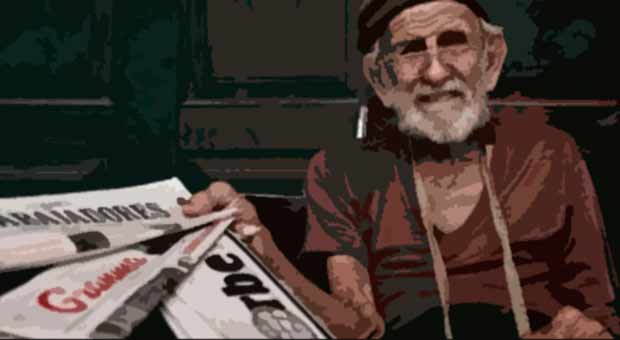 Why would I lie to you? Who am I kidding? Journalism in Cuba is bad; I’m tempted to say too bad, despite the desires and capabilities of some journalists. The public knows, officials know, journalists know it. They know it and they know it inside out. Our press is very gray, boring, schematic, cacophonous, simplistic, bombastic in their praise, timid in their criticism.

Radio and TV are not much better. Especially television, the other day I wrote in my blog: I think it is an exorbitant cynicism that the first information in TV Cuban news is compliance with the plan of rice production in a province when we all know that rice we eat is bad and expensive.

Someone told me the other day: journalism in Cuba seems to inhabit another dimension; it is clear that is not the same as the average Cuban is living in. I tried to clarify , I tried to find explanations ( I found them, in fact, but did not convince my partner) , I wanted to throw the towel to my colleagues (which is the same as throwing myself the towel , I’m part of this whole scheme ) but I finally agreed.

Of all the media in Cuba, those who are doing better journalism is those in the digital world, there at least occasionally one finds controversial and problematic approaches to everyday life; but we know how many Cubans have internet access (or even an intranet) in Cuba , for whatever reason . I’ll tell you what I said everywhere: journalism in Cuba has to reinvent itself. But for that, ladies and gentlemen, it is not enough with the good intentions of journalists, with the good wishes of readers, listeners and viewers. It is a problem that largely transcends us. I’m not saying that journalists have to stand idly by. But, if hands are not also moved above…

Anyway, I will not complain more. That’s what I just wrote I’ve heard it from (much more forcefully) respectable journalists from media in meetings and conferences. At one time I was more romantic; I thought that in the hands of young people it was changing. I’ve crashed many times already with the wall of reality.

I confess: I do not want to crash anymore (which does not necessarily mean I would have to occasionally). I decided I had to do my best at work. I got tired of talking in meetings and workshops. And that does not mean we do not applaud those who are not tired. Luck in the effort! Moreover, they can count on my modest contribution, but in any case I will be a soldier in that battle, never a captain.

For now I just want to respond to a kind reader of this column a few days ago found my personal email and sent me an emphatic diatribe, accusing me of double standards. I quote: “In OnCuba you say what you do not dare to say in the other places where you write. In other places you lie , or they force you to lie. “My most faithful reader (he ensures that he reads all my articles), I can assure you that I don’t lie anywhere in which I write. Not here in OnCuba , or the CubaSí website or in the Trabajadores newspaper, or Alma Mater magazine, or my personal blog. I don’t lie, nor have I been forced to.

I can sign word for word what I have posted over the years. Maybe I could not do better; I admit that sometimes I have not had the strength or the desire to do better. But I have never sold, as you suggest, my pen or my tongue. And while I answer your last question: “Why do you work as a journalist in Cuba ? ” It is simple: because I think I can do something for this country to be better. Something very small maybe, something perhaps almost negligible, but something. Not enough , fine. But it’s something.

Illustration from a photo of Javier Roche

Chinese cemetery in Mariel: from myth to reality