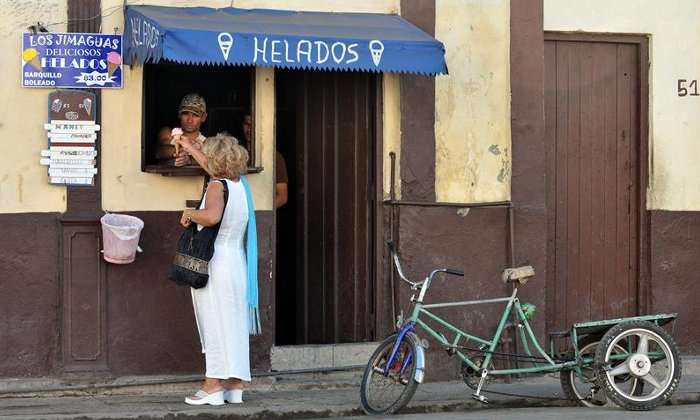 In another attempt to reform the national economy, the Cuban government again expands the range of private sector, this time by leasing food and drink establishments to their own workers, who will join the private sector.

The new management model of these premises will start on December first in three Cuban provinces: Artemisa, Villa Clara and Ciego de Avila, according to officials from several Cuban governmental entities.

Ada Chavez, Deputy Minister of Domestic Trade (MINCIN), said the system approved last July, will come into force in small one-two workers establishments, who, on their own will, decide to become “self-employed”.

But those who don’t wish to join this program can apply for the treatment of available workers as regulated by the Ministry of Labour and Social Security by Resolution 34 of 2011, explained by its Maria del Carmen Rodriguez part, an official of the sector.

Priority will be given to workers employed by the entity indefinitely and those who are doing their social service, making emphasis on women’s representation.

The activities established by the resolutions are: producer-seller of food and beverages by rations (paladares); retail processor-vendor food and non-alcoholic beverages (cafeterias), and workers for hire.

Leasing contracts with the domestic trade and gastronomy companies of the area in which the unit is located will be made individually by each holder of the authorization, Chavez stated. This contract is up to 10 years, and can be extended by agreement between the parties.

The property, equipment and other facilities available in the unit remain the property of the State, but the maintenance costs and these repairs will be borne by the workers, as well as the electricity, water, telephone, and advertising bills, at the residential rate.

A constant among those already engaged in this activity in Cuba, is the creation of a wholesale market to ensure supplies of essential perishables. But, regarding that issue, officials said they are “working on it.”

They said these new self-employed people will get a discount only in the case of rums, cigars and cigarettes, in order to protect consumers from high prices on these items.

In case the leasers pay the repairs their new places need, they will exempted from paying taxes for a year, but only for the first time.

The government will evaluate the results of this measure before extending it to up to five worker facilities. The ones approved now are 1183 establishments all over the country, a 14 percent of all food and beverage places in Cuba.

Of taxes and payments …

The Provincial Administration Councils will be authorities in charge of implementing a procedure to determine and approve the local rental rates.

Meanwhile, the Municipal Provincial Administration Councils will establish such municipal rates based on a norm issued by the Ministry of Finance and Prices (MFP).

As Rafael Carlos Gonzalez, from the tax studies group of the MFP, explainedthat those who enter the new management model will pay taxes according to respond to the same system established by resolution 248, 2011. Hence, they must pay taxes on public services and personal income and for the hiring of force work, in addition to the social security contribution, once he is registered as self-employed.

Taxes must be paid within the first 20 calendar days of the subsequent month.

The legal regulations governing the agreement are resolutions 241, 349 and 46 of the Ministries of Internal Trade, Finance and Prices, and Labor and Social Security, respectively, published in the Gazette of the Republic on November 6.

These measures are based on a program that began in an experimental way in barbershops and hairdressers in April 2010, aimed at reducing the bloated state payroll and make Cuban economy efficient.

The second life of Raquel Revuelta

Parody of the exile