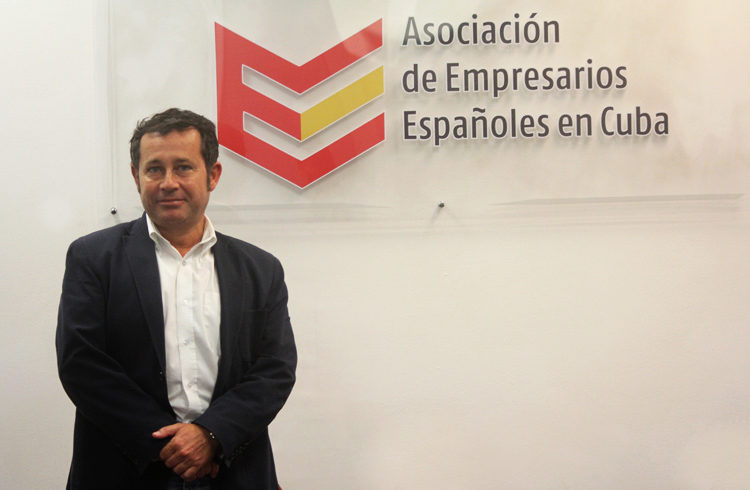 Currently, Spain is Cuba’s third largest trading partner -behind Venezuela and China, with a total flow of imports and exports close to 1 billion Euros at the end of 2013. The Iberian country is among the main sources of investment to the island, and ranks first in tourism joint business.

Reconciliation in economic matters has been endorsed since 1994 by an Agreement on Reciprocal Promotion and Protection of Investments (APPRI by its Spanish acronym). Also, the Cuba -Spain Business Committee, which 19th work session took place last December, contributes to the regularity of the links.

International Economic Associations of the 15 main investor countries in Cuba

In this context, the Association of Spanish Entrepreneurs in Cuba (AEEC by its Spanish acronym), which already has two decades of existence, seeks to strengthen these relationships and secure involvement in the domestic market. The institution brings together around 200 business men and women, representatives of recognized companies such as Banco Sabadell, Miguel Torres, Bankia, Sol Melia, Iberostar, BBVA, Vima, among others. Xulio Fontecha, AEEC Board president, spoke with OnCuba about the prospects and current scenario of the economic and trade relations.

How could you summarize, broadly, the experience of Spanish businessmen in these 20 years?

The AEEC is only of its kind in Cuba. That means many things, first, that Spain is not any country to Cuba. Beyond circumstantial or geopolitical market conditions, Spain has a specific importance, not only in the cultural, historical, familiar field, but also in business and economic level. Having 200 associates means a strong weight in supplies, trade, and tourism.

At first there were very few entrepreneurs, and then the number was growing. Today we are at a record figure. There are at about 30 businesses that in 10 or 15 days will be integrated to our block. The idea is reaching the anniversary announcing that we are 230 entrepreneurs.

We reach this date with many changes in two ways: within the association, which began a process of internal reform just four months ago with a new directive; and also a remarkable transformation in the Cuban context, with topics such as Mariel Special Development Zone and the Foreign Investment Law.

Overall, a sense of economic opening and new possibilities is lived, with phenomena that are being seen from one or two years ago, as the self- employment, buying and selling properties, higher facilities for various processes.

In your opinion, what new business can be glimpsed for Spanish businessmen from the new Act 118?

The law is so vast and plural that anything could happen. Spain is the first power in Cuba in matter of tourism, not in tourists’ emission but in creating hotel rooms, and it seems that this is going to be multiplied through the Foreign Investment Law.

Spain has potential that can be very useful for Cuba in areas such as mining, port and airport management, which it develops in many places where winning biddings-, in alternative energy technology . Cuba is a paradise for wind and solar energy, which are little exploited.

In the agricultural and livestock topic, Spain is a great power, as an exporter of food of all kinds. So I think we now have some excellent opportunities, regardless of whether economies such as China to circumstantially gain a specific weight.

I think Spain can be an excellent economic and strategic ally for the Cuban state, and with the Foreign Investment Law that has to grow up. We receive many Spanish companies, even without being associated, who ask us about the situation, and in general they are coming from all sectors .

Another objective of the Act is to attract know-how best practices and management methods. How could the Spanish entrepreneurs provide in this regard?

To start, we have a code of ethics that must be met by all our members. We are the first to collaborate in the fight against corruption, irregularities and crimes. If in our country, where unfortunately there has been so much corruption linked to the political world, we deplore it as citizens, we obviously will not be in Cuba to support such practices. And if one of our associate is found in actions such as these, he is expelled; according to the statutes, not by my decision or that of the board.

Furthermore, in terms of business management, know-how, business operation, I think that Spain is a good example. In fact, there are sectors such as tourism, where it is becoming increasingly common for Spanish companies here to organize seminars, courses and employee and manager training.

In my opinion that’s a good thing that Cuba is learning to explode. It is envisaged in the Foreign Investment Law that when a new business is created, Cuban engineers and executives must be trained. For the national business sector is easier to communicate with Spanish partners than with colleagues in other countries. I’ve been 25 years in the island and I see it that way.

The next edition of the Havana International Fair, in November, promises to be a great time, because the Port of Mariel is already operating and Act 118 is in force. What are your expectations for the event? What do you have prepared for those days?

It will take place the visit of an important representative of the Spanish government, who has not come to Cuba for a long time ago. The fair will be widely attended by the Institute for Foreign Trade of Spain (ICEX by its Spanish acronym). With the theme of Mariel, and especially on foreign investment, this edition has aroused great expectations, regardless of American laws, which remain something real.

Many entrepreneurs will come, especially to invest, not only to trade. This political visit is very important to foster relationships; that was missing in recent years.

Mariel is one of the most ambitious projects in the country. How do you rate this initiative?

There is still confusion, even though the Cuban government has organized business delegations that have visited European countries, they have been in Spain, Italy, France, explaining, lecturing. We, as an Association, prepare a talk on Mariel Special Development Zone and another on the Foreign Investment Law. But there is still confusion, people are still talking about the Free Zone of Mariel, and it has nothing to do.

I think maybe there have been some problems with the presentation of the project. For example, if you want to go see the Mariel Zone, it is very difficult to see it. Then sometimes you have trouble thinking of investing in a place that is so difficult to access. Also, maybe Mariel theme has to do with being a producer or supplier of products and services for the area itself, or to export from there, and that’s not so easy.

However, it arouses much more interest the Act 118, to which many of us can recourse with relative ease. Because maybe I would like to open in Cuba a furniture factory to sell to hotels; and there is a factory in Boyeros, abandoned or that could be recovered, and I can put my plant there. It is there in Boyeros, and everything is easier then.

Until now there is interest from the Spanish business community in settle in the area?

How do you rate the attractiveness and fundamental disadvantages of the Cuban market?

The blockade does not seem to exist until it’s your turn. It’s like a disease or traffic accident: you think that it will never happen to you, and one day you’re driving and then it happened”. Sometimes it is exaggerated a little, here we justify things, but it is real and it affects us, it is a problem that many suffer.

In that matter we are like Cubans. We cannot bear to be pressured by anyone. I represent a British multinational company, which is also in the United States, and personally I have suffered the blockade, I have been fined and my company too, we are on blacklists and that has forced me to move my bank accounts, making triangulated operations… We are not braver than others, but the major banks in Spain, the first hotel chains are here, and so they can not be in the United States.

Bureaucracy, said as so, has been much reduced in Cuba in recent years. The process of decision making has been centralized and ordered, and I think that almost all who are here and those who are coming now perceive it. That is, you do not give as many laps as before, now you say “yes” or “no”, “you do not waste time.” I think in general all investment and foreign trade activity has been regulated well enough. There are numerous countries more complex to work.

Another aspect is that Cuba is not very buoyant from the economic point of view, and then logically, they have little purchase by not having a hard currency bonanza. But now at least in the country you buy what you could afford, that is, the state, through its network of import, is honoring commitments; and that’s important, it was not so years ago. Now, no one can come here and make a billionaire business, that’s impossible, but in Spain you cannot do it either.

The negotiations with the European Union are another important process affecting the country. What are your expectations about this? What benefits would bring to the Spanish businessmen a progress in this regard?

All political approach of Spain and the European Union towards Cuba encourages trade, business activity and exchange.

Cuba is experiencing a period of quite significant changes in its economy. If you are consulted about the upcoming change, which would you recommend?

I think that monetary unification would be very important, essential. That is still a concern today for Cubans and foreign investors. It is very difficult, after so many years, but it is a problem.

I think this impulse given by the Cuban state to practice self-employment, I think it needs a stimulus, linked in part to the monetary unification, and in part to the possibility to import goods; to prevent fraud, intermediation, legal and customs disputes, etc.

That is, if you set up a hairdresser, then you can legally apply for authorization to import dryers, dyes, chairs, or the state must create a network to supply at preferential prices to people with private businesses. It should further assist the development of these self-employed, the small business network that is very important in Cuba and is solving many problems.

Piel Adentro “I try to mend my sides”

Piel Adentro "I try to mend my sides"