The famous Capri Hotel will reopen this winter

venus
in Tourism in Cuba
0 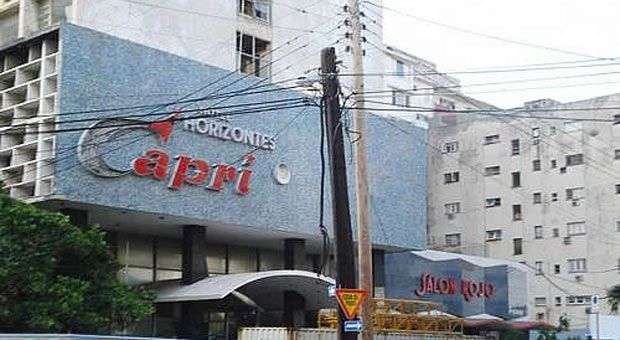 Cuba’s tourism authorities announced today the reopening of the famous Capri Hotel in Havana scheduled for the upcoming winter season, after four years of being subjected to capital repairs.

The reopening of the Gran Hotel Sevilla-the original name of the facility, is among the activities promoted by the Ministry of Tourism in order to increase its lodgment capacities to face the winter season, historically the most favorable of the year in terms of visitors.

At a press conference with local and foreign media, Manuel Bisbé, commercial director of the Ministry, reported that in the period they also will open three Italian clubs operated by Alpitur and Eden Viaggi firms, at the poles of Varadero, and Santa Maria and Largo Keys, which will make a substantial difference from previous seasons.

Seeking to revive the second engine of the Cuban economy, ailing in recent months due to a slight decrease (-1.3 percent) in visitor arrivals compared to 2012, more than three thousand rooms across the country are been refurbished for the coming high season. Outstanding in this respect arethe works undertaken in Villa Cojimar in Cayo Levisa and Villa Coral in Largo Key.

Amid the prevailing complex international situation, Cuban tourism has not stopped its development plans and we have been preparing very seriously for the next season in which we hope to achieve good results in receiving visitors, Bisbé said.

Also new for the winter season will be the inclusion of the nonstate sector tourist offers within the packages and programs that travel agencies operate in the domestic and foreign markets. In this regard, Bisbé announced they have already identified a large group of private houses and restaurants with excellent services, and the Ministry is working along them to hire their services.

At the same time, cruise boats operations around the island will grow such with the Canadian Cuba Cruise with a capacity of up to one thousand 200 passengers that next December will start a circumnavigation of Cuba; also in Cuban waters we will see the German Star Clipper (1 700 passengers) and Tomson Dreams from UK, which returns to Cuba after several years of absence.

Also, in December, the United States’ Semester at Sea cruise ship will visit Cuban ports, which is part of a school program that allows students to earn college credits for studies abroad. According to the Cubaheadlines site, the stopover in Cuba has already been approved by the U.S. government as part of a journey in which students will visit several ports in the Atlantic.

Unlike other years, when the hotel facilities were barely ready for winter, in 2013 they already secured a number of rooms throughout the archipelago. Proof of this is the opening of Marina Meliá Varadero, one of the most important executions in the Cuban tourist industry in recent times – and also the most luxurious as experts on the subject described it, which has among its main attractions a docking area for more than a thousand vessels and 122 condominiums.

In recent days also the Eurostar Santa Maria with 846 rooms, the Pestana Cayo Coco of 468 rooms, and the small REX in the city of Santiago de Cuba were opened. They also undertook the expansion of Blau Costa Verdem located at the pole of Holguin and Planta Real of the Paradisus Princesa del Mar.

Farewell to the 2013 Diamond League

Candido Fabre: we want to party with you