The dynamic symphony between waves and rocks, together with the city noises, are the “background” for music of all genres and for all listeners. 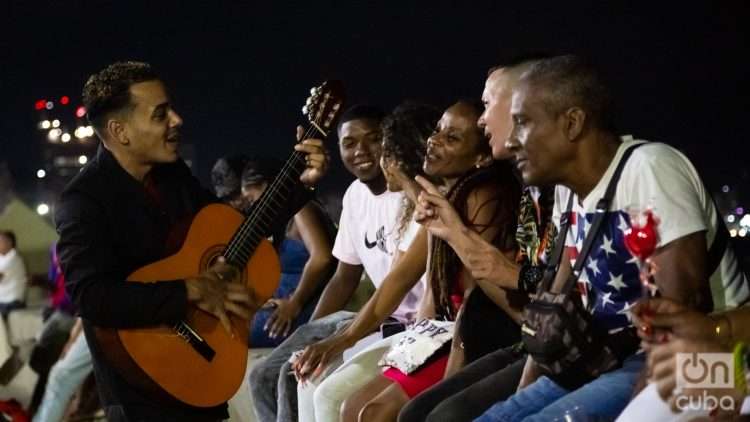 By Isabel Cristina and Jorge Ricardo

The sea has its own music. Sometimes soft, sometimes impetuous. The waves and the rocks improvise a dynamic symphony, while the city noises combine to create a kind of salty jazz that seduces people walking by. The horns of the “almendrones” overlap with the mechanical recording of the ice cream vendor; the tinkling of a few centavos on the metal plate that is offered to San Lázaro in a little room on Príncipe Street.

They mix with the sound of the sea, the music of a Santeria party and the rattle of an old Aurika washing machine. From the wall you can hear the barking of a dachshund and the screams of a mother: “So and so, come and get it!” In the early morning the laments of an artist in decline, the moans of a young couple and the clink of a few glasses of wine are perceived, far away. On this whimsical background, the music of the Malecón slips through.

There is trova from all eras. You can see the new Silviopablos singing, the children of those dreamers who, in the hard years, went to the Malecón with their invented string guitars and their utopias intact.

There are the traditional ones who, after performing in a little bar on Obispo, walk along the wall looking to complete the night to the rhythm of El Guayabero and Compay Segundo. There are the geniuses who make their guitar arrangements of a hit by Alexander Pires, or “Despacito,” or “Tres lindas cubanas”. There are the lovers of Santiago Feliú, wanting to imitate his shy genius and his beautiful habit of strumming guitars upside down, furiously calling for a ceasefire or trying to seduce the girls with his geeky trova.

On Saturday nights you can listen to the latest reggaeton music. A different one at each kiosk. And they get into your ears like a sound palimpsest that accompanies imported beer and fried chicken. If you are lucky, you will coincide with a concert by Habana D’ Primera in the Piragua or a colorful street dance that brings with it all the longing for the carnivals of yesteryear.

Well attached to the head, the runners’ headphones transmit all kinds of melodies. Electronic music, heavy metal, indie rock, hip hop and even mambo help to improve the cadence of those who run along the Malecón. You can even play a game of guessing what music they are listening to by the rhythm of their strides, or by the expression on their faces.

In addition to those who listen to their playlist alone, there are those who share their musical tastes. There are still some neon horns left, those that were used so much and for some strange reason started disappearing. There are those who walk around with old Los Van Van records at full volume: “Televisión a color, que bien se ve.” Others with J Balvin, with Ivy Queen, with Marc Anthony, with Leoni Torres, with Laritza Bacallao, with Ricardo Arjona. One can hear “El chico del apartamento 512” and “El punto cubano.” Some Red Hot Chili Peppers fan walks on the wall with “Californication” and some prankster puts on the Peking Opera.

Some go to rehearse in front of the sea, with their trumpets and saxophones and join the litany of water against rocks. Others sing in their ears: “Te vi, juntabas margaritas del mantel…” and others watch Bad Bunny on their cell phone: “Puerto Rico, estoy cabrón!” Over there you can hear the “¡Azúcar!” from Celia Cruz and on the other side some guys who know the entire Buena Fe discography. Some discuss whether Ray Fernández and Kamankola are still friends and, as soon as they find out, they sing a song by one and the other with the same guitar and it becomes catchy.

People of many places and colors, people of all backgrounds and all creeds, file past the wall. Together we make the great soundtrack of the Malecón. One that mixes voices and emotions without permission from any music producer. An amalgam in which everything fits and blends in perfect harmony halfway between the sea and the city.