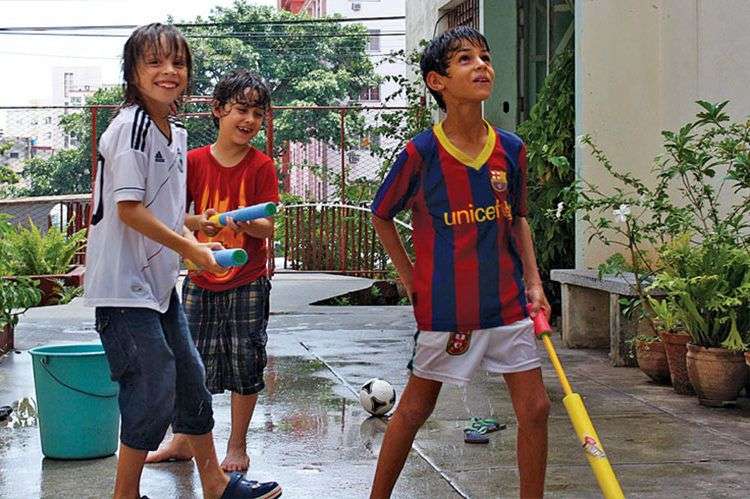 RAFA-WAN KENOBI WELCOMES THEM. THEY NEVER ARRIVE TOGETHER, but they fly in every summer without fail. When this Kenobi is not a Jedi master with a laser sword, he is a 10-year-old boy who lives in Havana, and who waits for months to reunite with Fernando Skywalker and Thomas Palpatine.

It won’t be a dream; he’ll have them right there with him at Tita’s house, which over the summer becomes a palace of fun, located near the La Rampa district. For the next two months, the three boys will become even more like brothers through their games and their inevitable quarrels and reconciliations. Every summer, the hero from the Galactic Republic and the evil Darth Sidious arrive, also transformed into 10-year-old boys, educated and quite happy. Fernando comes from the lovely Mexico, with a catchy “órale” that he utters less and less frequently as the days go by.

His mom has been sending him alone since he was 5 years old. A flight attendant brings him right to the door of the terminal. On this side, Aunt Tita and Granma Mercedes welcome him like a trophy of peace. His messiness and absentmindedness bring a special rhythm to domestic events: “Fernan, look, you left the water running….” But it is happiness itself to have him here for at least these months.

Even if he gets sick, which has happened, his mother knows that he is in perfectly good hands. Thomas comes from farther away: Hamburg, Germany, a long, 11-hour flight across the wide Atlantic, with a stopover in Paris or Amsterdam, whichever his mom can get both cheaply. Tita welcomes him, too. The three boys all sleep in the same room, in a never-ending pajama party full of crazy fun.

His mother, along with those of Rafa and Fernando, are lifelong friends who shared in life’s different enjoyments together; they all had kids in 2004, practically simultaneously. As soon as they could, they reunited in Havana and planted an extraordinary love among these three boys.

Every summer sees the arrival of the blond Thomas, who understands Spanish so well, even though he speaks it so “funny,” and he settles right in to Cuba…. He dives into the July and August heat, sweating profusely, and enjoys his rice and beans with gusto. Several years ago, he made an unexpected demand: “What an ugly name you gave me, Mom!” “What would you prefer?” his mother asked. “Tomás,” was the resounding answer. For anyone who visits during this time, Tita’s living room can be disconcerting.

Hundreds of Lego logs are everywhere, piled into fat towers—probably the skyscrapers of a future city in another galaxy—or scattered in every corner of the republic of play. Camp is never taken down. Tomorrow will be another day. The Star Wars saga has been a real launch pad for their imagination. That is why they’ve given themselves new names, and why the plot of their story, made up of fantasies involving all three, tends to be complex and full of indomitable futures. These three kids who are repatriated every summer fly high above any kind of chauvinism or faith-based loyalties. All they believe in is their inspiration.

It is easy to read in the eyes of these boys who are passing through, whose homeland is not set in stone but rather is air and water and life: affection. Rafa-Wan Kenobi, Rafa, always welcomes the others. Many a time have they planned to run off to Hamburg and play monsters in Stadtpark, or visit the planetarium where Thomas has guessed at what kind of Star Wars would happen in this galaxy, around our Sun!

Just 10 years old, they picture themselves devouring quesadillas and churros in the Plaza of Coyoacán, and stuffing themselves silly with those sweet breads that have nothing to do with French bread and that are so exquisite: one kind for every day of a vacation that would likely be in Mexico DF with Fernando as host. Órale, Fernando. For now, Havana is always home port in the summer. The magnet-like draw of Aunt Tita, getting drenching in rain showers, those days at the beach…. Everyone in the family has heard Fernando say that when he is in charge of his own life, he will come back to live in Cuba.

Not everybody believes him, because they think that such an adult prediction can’t fit into such a little body. Very soon, when school is out for the year, they will be back again, brandishing their laser swords and having fun no matter what.

As soon as they see each other, it will be a big hug; and at the end, as part of their liturgy of three, they will pull out one of Thomas’s blond hairs as a souvenir, as their loot of love, before they leave. The hair, of course, flies away, gets lost, disappears in the final hubbub among the three before they head to the airport. Because they don’t know how to say good-bye seriously.

Real estate companies on the web

DanzAbierta and an intrusive dancer

DanzAbierta and an intrusive dancer

Martha Jiménez; "for me, Camagüey is inspiration and oxygen"

Síntesis, the sound of ancestors