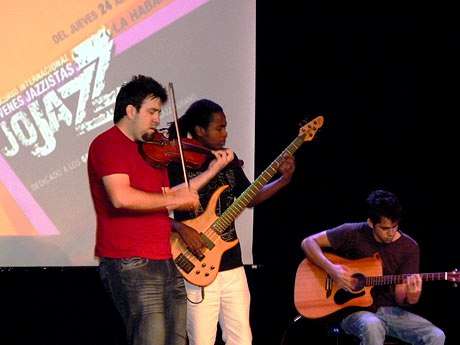 Fifteen years after its first edition, the Young Jazz Musicians Competition, Jojazz, will hold a new version with the participation of talented young musicians from various regions of Cuba and abroad. This is a sign of the good health this genre and this competition enjoys in Cuba.

From November 22 through the 25th, more than thirty contestants will compete in the categories of performance and composition, for children and seniors, with a new venue: the Tito Junco Hall of the Bertolt Brecht Cultural Complex.

The Dutch band Arifa, frequent participant to this event, and other musicians from Mexico and El Salvador, will compete along with the young Cuban jazz talents, told On Cuba the organizing committee of the event.

Jojazz 2012 displays an exquisite concert program for all fans of the genre at its other venue, the Mella Theater in Havana, in which the public could enjoy magnificent shows such as the inaugural one, where it will be presented the CD’s “En la espera” (While waiting), by saxophonist Michel Herrera, and “Sueños del pequeño Quin”, by Joaquin Betancourt and his young Jazzband, this CD won a Special Prize at the last International Fair Cubadisco 2012.

Percussionist Yissi Garcia will go on stage on Saturday 24; she will be accompanied by the bassist Jorge Reyes and other guests, while the festival’s closing will be on renowned trumpeter Yasek Manzano and other previous Jojazz winners.

Since its creation, in 1997, the Young Jazz Musicians Competition has awarded more than 150 artists and it has recorded, together with EGREM, Colibri, and BisMusic record labels, nearly two dozen albums.

This contest is organized by the National Center of Concert Music and the Cuban Institute of Music. The event is the ideal opportunity for the students enrolled in Cuban art education system, mainly the middle and upper level, to show their qualities.

Jojazz has been enriched by each of its 14 editions, what started as just an interpretation contest to choose a participant to the Jazz Plaza International Festival; it now has the composition section.

Moreover, a theoretical event involving important figures in Cuban musicology takes place since 2003; this makes it the ideal space for reflection about jazz courses on Cuba.

From November 22 to 25, Havana will be the world capital of young jazz; its fans can enjoy real display of talent and also see first hand the quality this genre has in Cuba.

Virtues and absurdities of a productive tour