by Leslie
in Lights and Shadows
1 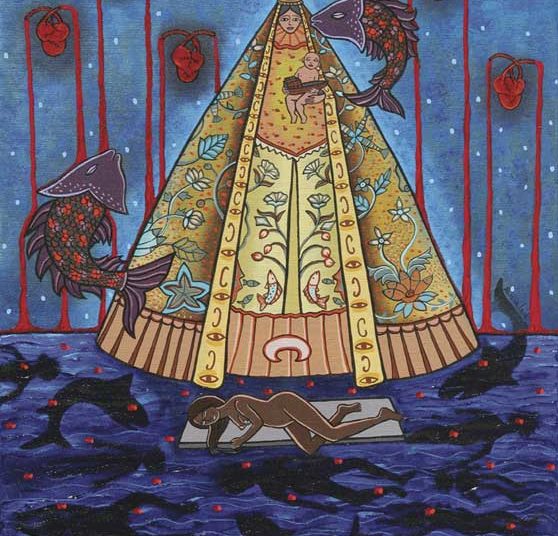 Alicia Leal has established her own discourse, a distinctive way of doing things, an approach to art that has made her into a creator with deep Cuban roots — passion and reason — who has been able to place women at the center of her work as an inspiring metaphor.

Leal is a 1980 graduate of the prestigious San Alejandro National School of Fine Arts, specializing in drawing and painting. Her work oozes with a spirit of adventure and insinuates the unexpected: she recreates the mythology of the Cuban countryside. With pristine refinement, she addresses the legends and stories of her hometown, Sancti Spíritus; the family network, her rural childhood and the fables recounted by her grandparents.

For a number of years she focused on the relationship between the city and its people: she painted the interiors of houses, but especially Havana bay, a geographic accident that completely fascinates her. “I think that I am the artist who has painted the Malecón the most,” she confessed to me some time ago. And that may be true, because depicting that seawall, and above all what it represents as a border, as a boundary between land and sea, as a demarcation of our island almost became a personal obsession for her.

We Cubans are surrounded by blues — which range from grayish to cobalt — and that tonality is precisely what appears frequently in the work of this artist, who has academic training but also a naïf aura that filters through.

In reviewing a very limited selection of some of her most significant paintings of the past decade, one can appreciate — with a primitivist eye — repeated references to certain icons, such as water, rivers, fish, palm trees, birds, the moon….

A dónde iré cuando se pare el corazón (“Where Will I Go When the Heart Stops), a 2009 acrylic on canvas, presents us with the woman as the center of the universe, immersed in the blues that characterize her: fish and stars as expressions of what cannot be seen at the bottom of the sea or in cosmic space.

Camino a mi casa (“On My Way Home”), a 2010 acrylic on canvas, depicts an ark with a woman in the bow, defiantly looking at the horizon, and once again fish. A mysterious moon, hidden at the bottom of the sea, is in a dialogue with an enigmatic fish.

With Novia del mar y el viento (“Bride of the Sea and Wind”), a 2004 acrylic on canvas, serpents that touch the water emerge and rise up thanks to the palm tree. The reptiles generate a breath of life and protect, not inciting to original sin: nude, she feels an equal commitment to the sea and wind. The fish once again surround her, shelter her.

Un día después (“One Day Later”), a 2009 acrylic on card stock, takes it for granted that one can mount a fish, grab hold of it, squeeze up against its backbone, confirm that it has legs, that it can run in the depths. Others can’t; others swim in a single direction, a single way. A roulette of fire that aims at the four cardinal points — north, south, east and west. Life continues one day later.

Yemaya, this time seated on the imaginary line of the horizon; two masked fish court her; others, dark and terrible, prowl around the possible bait. She, the virgin, allows herself to be escorted by five hearts that symbolize life. That is hope.

Hanser García, a Swimmer from another Galaxy