CIFO, an unprecedented perspective in Havana

hai
in Lights and Shadows
0 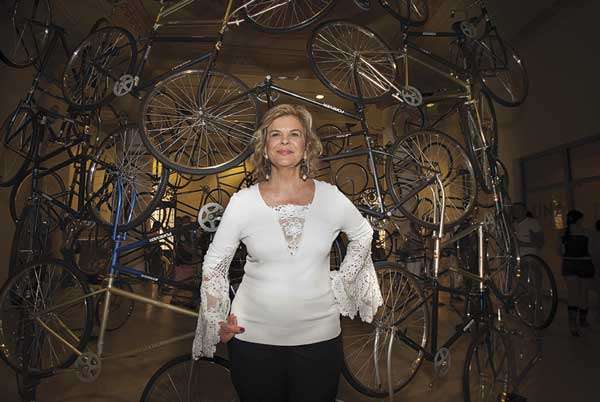 Ela Fontanals-Cisneros is a woman who loves art. Not everybody knows that she is Cuban, because she has lived for part of her life in Venezuela and the United States, but spending a few minutes with her is enough to feel that unmistakable warmth that she has not lost, and that makes you feel immediately at home.

She has done many things for Latin American art, such as creating the Cisneros-Fontanals Foundation (CIFO) in 2002, with the objective of fostering, supporting and promoting the careers of emerging and experienced artists, providing them with different resources for making art and engaging in cultural exchange with the international art scene.

Beginning on May 12, the national fine arts museum, Havana’s Museo Nacional de Bellas Artes, is exhibiting some 85 selected works by well-known Cuban and international artists as part of the exhibition CIFO: una mirada multiple (CIFO: A multiple perspective), which is an invited guest of the 11th Havana Biennial.

This is the first time in fifty years that something like this has been done in Cuba. Never before has a private exhibition of this magnitude been invited. In that sense, I think we are making history.

How did you come to the Museo Nacional de Bellas Artes?

It was the Museum that invited us. We were surprised in the positive sense that we were asked to bring part of the collection to Cuba. I thought hard about it and decided to do so; first, because I’m Cuban, and therefore my vision about what I’m doing comes from another standpoint; and second, because I think that this people deserves to enjoy the diversity that exists in contemporary art today.

CIFO: una mirada múltiple is an exhibition that brings together a significant number of artists. What was the selection process for the works you brought to Havana?

We wanted an exhibition that was as global as possible, and that is why we selected works by artists from different countries in Asia, Africa, America and Europe. Initially, my idea was not to bring Cuban artists — who are extensively represented in other spaces of the Biennial — but afterwards, it seemed important to us to include artists like Ana Mendieta, Jorge Pardo and Félix González Torres, whose work, because it was made outside the island, has not often been directly appreciated by the Cuban public.

I understand that you began collecting long before you founded CIFO.

I am a very creative person and as a girl I always wanted to be an artist. My parents enrolled me in drawing and painting classes; then I left Cuba, my life changed and I didn’t continue. When I was 22, I had a gallery with a friend, but I soon sold it.

I began buying Venezuelan art, and then Latin American art, by maestros like Rufino Tamayo and Wifredo Lam. In 1988 I stopped collecting, for about six years, because during that time I began questioning the elitist nature of art. I couldn’t help but think that maybe I was being very selfish to be focused solely on that. At that time, I began a number of programs to help the people of Venezuela; I had a home for street children, hospitals, projects with the United Nations, etcetera.

But one day, I realized that I could do the same thing through art, perhaps because I’ve always had a philanthropic side to my personality that makes me very happy. So I said to myself: if I don’t do it now, when will I do it? Time is going by very quickly, and I’m not that young anymore! I knew that I had to do it there and then. So we created the Foundation, its museum — which has more than 3,000 works, and all of the projects that I’m working on now.

Do you think that the 11th Biennial will open up new paths?

I have plans now for the Foundation to do things in Cuba, and to be able to help Cuban art much more.

Every year, CIFO grants artists a number of awards that vary depending on the quality of their projects. This selection process involves different stages in which consulting curators from all over Latin America, and subsequently the board of directors, rigorously analyze and select their proposals. Curators promote the artists from their country, and in the case of Cuba, that job belongs to Gerardo Mosquera and Cristina Vives.

Camajuaní: Land of Traditions and Parrandas

The Secrets of La Guarida

The Secrets of La Guarida

Medical services for visitors in Cuba