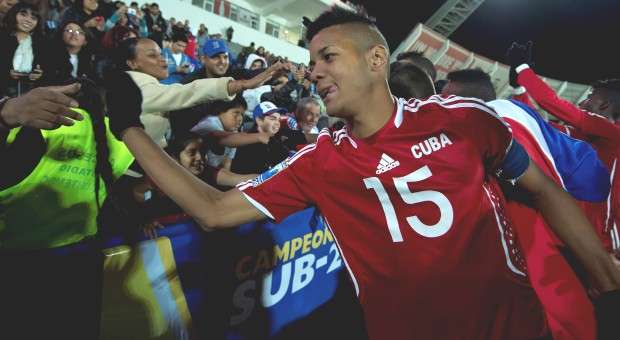 Speaking of thrashings in Cuban soccer is almost as referring to huge beatings against Cuba´s national team. However, a different picture is emerging because the U20 Cuban national team hammered (3-0) its counterpart of Nicaragua in the CONCACAF WC Qualifying Championship, which grants four tickets to the universal tourney Turkey 2013.

At 2160 meters above sea level, at the Lobos BUAP University Stadium of Puebla, Mexico, the squad coached by Raul Gonzalez Triana came to the pitch to show that the initial victory over Canada was not by chance, and with a dizzying pace, combined with individual skills, enabled them to completely dismantle their rivals.

Again Maykel Reyes, rising star of Cuban soccer, shined and now is the sensation of the competition, to the point that the Mexican press has described his performance as exceptional. The striker has become a revelation due to his flashy style and the audacity with which he faces rivals, usually astonished at his change of rhythm and ability to control the timing of the match.

Right the skills of the player from Pinar del Rio forced the first chance of Cuba against the Nicaraguans, when at 30 minutes unstoppable penetrated down the left toward the goal and could only be stopped after a mistimed tackle from defender Cristian Gutierrez, sanctioned with a penalty by the referee.

Captain Arturo Adrian Diz Pe took the penalty and opened the score for Cubans, who just three minutes after the break scored their second goal by an accurate header from Daniel Luis Sáez, unstoppable for the goalkeeper Pablo Cuadra.

The tricolor team never showed symptoms of fatigue, something very common in Mexican altitude, perhaps by the multiple aerobic exercises made on Cuban soil, or for the many hours running wearing wet handkerchiefs in their noses to cause shortness of breath and adapt to breathing through the mouth.

Thus, they beat their opponents, who orphan of ideas and breathless before the Cubans´ devilish cadence, who were, by the way, very fast in every action, to the point that, despite the minimal difference, never felt threatened by an adversary who was always with the knees on the pitch, surrendered by such superiority.

Cuba´s superiority increased at the 60th minute when a lob by Lazaro Mezquia hit the crossbar, but four minutes later Nicaragua was not so lucky. Yordan Cruz, an overnight nightmare to the opposing defense , got rid of his marker in the box and sent a pinpoint cross that Maykel Reyes powerfully headed into the nets, his third goal of the tournament, and now is the top scorer of the event.

With 25 minutes left and such score, Cubans dedicated to show their skills, an excellent confirmation of their good shape , who, despite the good sensations, have only reached half of their way , because to get one of the four World Cup tickets in dispute they must beat in the quarterfinals to the second spot of Group A, which will be defined in the dispute between the United States and Costa Rica, two top-flight rivals who will demand the best performance of the Cuban squad to get included, for the first time, in a World Youth Cup.

Birth is an unmentionable party here

Habanos: The excellence of a Cuban product