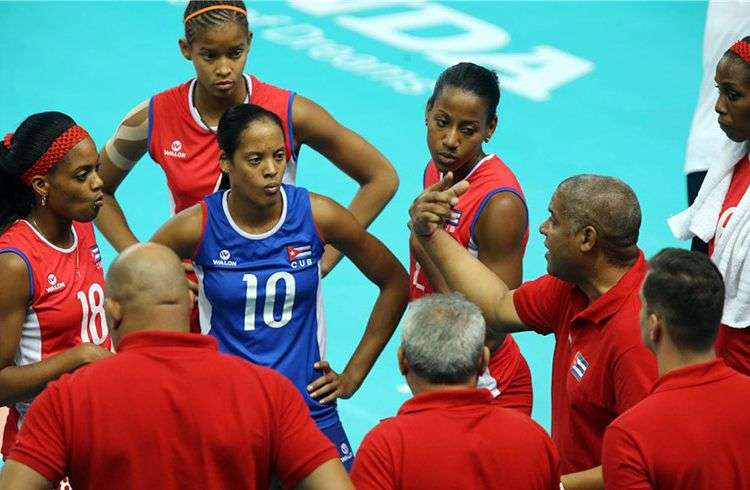 The Cuban worst performance in the history of women’s world volleyball championships has been materialized: in the event taking place on Italian soil, the Caribbean girls were eliminated in the first round and could only win one set in five matches; they did not accumulate points and finished last in Group D, and 22nd in the tournament.

This outcome did not surprise anyone, only a few blind or infinitely gullible people expected the unexpected. But not because of that, the World Cup adventure of Juan Carlos Gala’s pupils is less disappointing.

After the results achieved in our geographic area, some bet for decent losses to rivals of much higher level, but the reality showed no mercy with the Cuban squad which was buried alive over and over again.

Cuba ’s four first games showed the same result, quick 0-3 defeats against Belgium, Puerto Rico, Japan and China . But in the fifth match the girls managed to win the second set (27-25) over Azerbaijan, but that did not change the finalscore.

In the Italian city of Bari , the largest audience to see the Cuban team never exceeded 800 people at the Palaflorio Arena. Nothing left from the secured show provided by the spectacular dark-skinned Caribbean women in past decades, not even Melissa Vargas-a prodigy child who at the age of 14 carries the offensive burden of the squad -manages to erase the bad taste of a generation that has been obliged to play with not ace player s due to the absence of a stellarrelief.

When that cosmic side of 1990s and the beginning of the 21st century ended its active life, it was still possible to envision a future; but that same future embodied in the talent of several Cuban volleyball players decided to make their way in other lands while the island remained static.

Maybe that’s why it is somewhat unfair to blame these young players for the disastrous performance in this World Cup. Yes, this is a generation with few real talent, technically and physically diminished, who do what they can and are really far from the first level of the sport in the world. It is not also a matter of direction, despite possible disagreements with the coaches, the coaching staff can only work with what they have on hand , and quality raw material is scarcetoday.

By reviewing the statistics of the Cuban team in this edition, it is possible to realize the primary role that Melissa Vargas has held in the squad: the teenager scored 67 points (more than 27 percent of those achieved by her side) to leadthe scorers and reached by far the largest amount of successful attacks (58). Alena Ojeda was the team’s second best attacker with only 34 spikes.

Vargas , in addition, was the most efficient spiker by reaching 44.27 effective percent in her attacks on the 131 sets she received, which were the highest figure for any of the players of the team. Also, the young girl ended second in serve(5 aces and average of 0.3 per set) and fourth among the blockers .

In general, the Cuban side scored 243 points, had a 40.6 effectiveness percent on the attack, blocked for an average of 0.3 per set and its serving percent was of 43.82; all these results are below international standards and are insufficient to aspire to win at the highest competitive level.

However, the serve of the Caribbean girls scored 21 aces, figure in line with the average of a group in which they were only surpassed by Japan (32) and Belgium (29), as the 22 aces achieved by Azerbaijan are no notable difference.

Regarding experience, Cuba presented the youngest and inexperienced roster of the poole: 20 years and 7 international matches on average.

There is no doubt, Melissa Teresa Vargas Abreu is a superstar, and she is a girl who manages to arouse interest since going out to the court. She is a prodigy because she shows that at only 14 she stands out above her teammates. Put it in another way, Melissa was chosen by fate to delight the world of volleyball.

But Melissa is only 14, and in the last stage she has not lost any of the tournaments played by the Cuban team. At this point, what impresses the most of the girl is that no injury has slowed her insistent attacks, and that her teen body has not collapsed under so much pressure.

The teenager from Cienfuegos province has received the task of rescuing some shine for the Cuban women’s volleyball, needed of show and quality in large quantities. A job that requires today, according to the results, more effort than theone this exceptional player could deploy.

In the last World Volleyball Championships in 2010, the Cuban team ended 12th, four years later it descends to 22nd place and with such result is unlikely to rise in the world ranking.

Barely a flash called Melissa remains from the spectacular dark-skinned Caribbean women and their shine on the court; she is the only player who today promises to stand as heir of them and try, by any means, to stop the free fall of this sport in Cuba.

People: Eleven thousand cups of coffee and a flower

The egg, the chicken or management of the henhouse

The egg, the chicken or management of the henhouse