Scrabble: more than a game of rare words 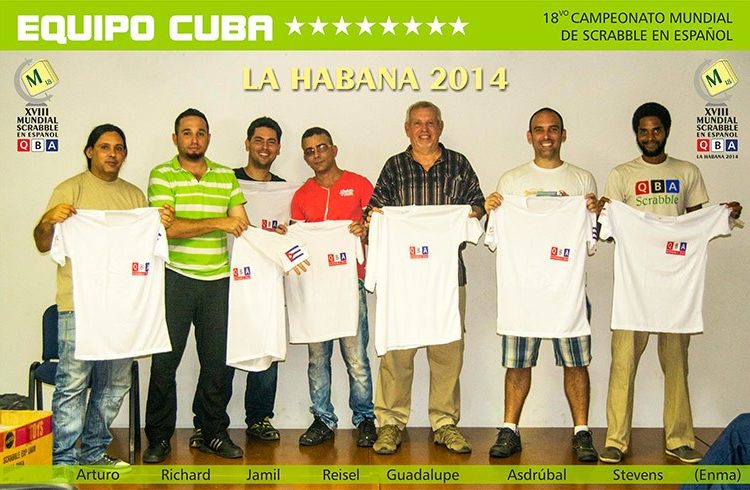 A World Championship has just finished in Havana, and no one seemed to notice it. The 18th Scrabble World Cup in Spanish, held in Cuba for the first time, was developed from October 12 to 18 at the Riviera Hotel, with the proclamation of Mexican Jesus Ortega as world champion of the classic modality.

In this category, the Argentine Luis Acevedo finished second, while the Cuban Miguel Stevens, debutant in the tournament, ended third, from a total of 86 players.

As a team, Cuba was runner-up behind Venezuela in the Nations Cup, which included for the first time an entirely Cuban squad.

It is also the first occasion in which such a large team (11 Cubans) can participate in a Scrabble World Cup.

” The Cubans´ level is very high. They have been playing for about 8 years and have progressed much more than other countries, “the Mexican Evangeliana Mayorga, coordinator and organizer of several World Cups, told OnCuba.

Mayorga says that Spain, Argentina and Venezuela are currently on top of the Spanish Scrabble worldwide and then Cuba appears after them.

Although players like Stevens are part of the Scrabble Promoting Group in Cuba, and even teach classes to new students, most of them still have not been able to afford travels to countries that have held ​​the previous world tournaments.

Registrations for the tournaments are not free, and the costs of air tickets must also be added to lodging and food during the stay.

The International Federation of Scrabble in Spanish (FISE by its Spanish acronym) has often helped Cuba with inscriptions, although there are other countries that are in a similar situation than Cuba’s, according to Arturo Alonso, who has been the director of the Scrabble Promoting Group in Cuba for over a year.

Emma Morris, the only woman in the Caribbean team and winner of the Nations Cup at the World Cup in Spain, agrees that Cuba has shown great potential for this game: “It has just been proved through Stevens, who finished among the best players of the world. This position places him on par with several multiple world champions, many of them in that mode. “

How to get a Scrabble?

Although the Scrabble Promoting Group in Cuba has since 2005 its headquarters at the Rubén Martínez Villena Library, in old Havana, and develops training courses and tournaments on the third Saturdays of each month, Scrabble is still little known in the country.

The FISE is trying, through promotion, scrabble to be included within the world mind sports games, which so far are the Bridge, Chess, Go, Draughts and Xiangqi (Chinese Chess). These sports have their own competition: the World Mind Games, which were created in 2008 as the main event organized by the International Mind Sports Association (IMSA).

But where can I buy a Scrabble in Cuba? How much it costs?

Alonso says that Scrabble games sold in the country are useless to Cuban players, as they are in English, and the pieces have not the same numbering. “An official game must have 12 aes and the ones marketed here have only 9” he adds.

The official Scrabble takes 100 tiles with a 15 x 15 squares board. The other games bring more than 100 tiles. “Those who are importing these games for marketing them in Cuba should be told which ones to buy, because when students are motivated for the game, their first question is where to buy it.”

Out of Cuba, a Scrabble game costs up to $ 30, according to Alonso. “The Group has 13 games. Some students have their own. The library owns are about 7, which are already quite old but we used them to teach classes. “

Games for holding global competitions are donated by Matell, the owner of the trademark. Acording to the Mexican organizer Evangelina Mayorga, such tournaments require from 80 to 90 games. Mattel has donated games for Cubans to continue practicing this sport, but they are not yet sufficient. This year, the Mexican delegation brought 79 games, a portion of which will remain in the country.

Miguel Stevens, the best Cuban player in the ¨Duplicate¨, he ranks seventh, states that the rarest word he has seen on the board was during this modality, when only one of the 50 players could construct the word ¨lactumen. ¨Stevens still does not know what it means.

“I know it’s a noun, but now I have to look for it and see what it means. I do recognize the categories of the words easily: verbs, nouns. But it is impossible to know all the meanings: the Dictionary of the Royal Academy is too vast. “

During the competition the Classic event, Emma Morris saw on her board words such as ¨luxabas,¨ . ¨ enza¨, ¨choto¨, ¨arraléis¨. She, in particular, says she does not train for tournaments. She does not read dictionaries. She does not memorize words. “I play for pleasure. I do not take it so seriously. But it would be cool if those who do it to have more opportunities to represent Cuba “.

In Rolando Guadalupe’s board you could read, for example, xi and ox. In other boards there were words as apitone, chollen, l lago, polcais, estorden, dodo, bue, aterecia, poch, bey and fez.

Often in the competition hall, a player lifts a shaker that is put on the tables for an assistant to corroborate if the word his opponent has just put actually exists.

The FISE Scrabble Lexicon Dictionary was created specifically for checking the validity in the Spanish language of each word, and the validity of the plays. This is also a cell phone app to allow assessors to scroll through the various tables and players can continue without much delay.

Before this World Cup, only three Cubans had been involved in an international Scrabble competition outside Cuba: Arturo Alonso, Rolando Guadalupe and Emma Morris.

Emma has been involved in the last 8 world cups, due to her possibilities of traveling by her own means. “My situation is a bit privileged in that sense. But you have to look for the possibility that others can also represent Cuba in tournaments to come. “

Alonso, on the other hand, claims to have searched in the time he has spent as director of the Group the support from different institutions, but almost none seems to find relevant this sport. None of the previous two directors of the Group managed to find support either.

“All this is self-funded by us, it does not report us money. All that is collected is given in prizes, in the closing ceremony, etc. There are other institutions that have unselfishly helped us such as Ciego Montero, which has given us the water for competitions. (…) Eusebio Leal has been of great help, by guaranteeing the space of the Library for over ten years. “

There have been 18 Scrabble World Cups in Spanish. During the first 8 editions Mattel sponsored absolutely everything: accommodations, financial rewards, etc. But sponsorships have gradually decreased. Cuba’s situation appears to be not unique. This World Cup could not be attended by Chile, Peru, and Panama, by lack of funds. “In our case, Alonso states, the same participants pay sometimes the inscriptions when FISE can not.”

Not only for geeks

Three Scrabble championships, in Spanish, English and French, are currently held in the planet .

The most widespread popular entertainment in Cuba when it comes to board games is dominoes. Among Cubans, especially those from less contemporary generations, Scrabble is virtually unknown. In the popular culture of several countries, its practice is associated with geeks, rare characters species, bored and absorbed in peculiar pastimes.

However, the importance of Scrabble seems to go beyond simple entertainment. Developed countries include it in school curricula and many universities implement it as an elective course to improve students´ spelling and vocabulary. Three Scrabble championships are currently held in the world: in Spanish, English and French.

“Classes have been taught for years, but hardly anyone attended them at the beginning,” Alonso says . “Since I assume the presidency of the Group, I have planned to spread the game, make it known throughout the country. This championship included two competitors from Matanzas who are creating a group of Scrabble. Many young people like these who are interested in Scrabble are chess players. “

“In Camagüey, a chess professor at the University is also interested in creating a group. There are many people in Cuba that gradually begin to know the existence of the game, although many do not know the group, “he confirmed.

For Stevens, “Scrabble is a board game like dominoes, but it allows you in championships like this, getting in touch with words from other countries or specific areas of knowledge.”

For Emma, “the game has many qualities. It gives you a lot in terms of spelling, and even some math, because you have to constantly add and subtract points. “

Emma, Alonso, Stevens and the rest of the Scrabble Promoting Group in Cuba expect, from the celebration of this World Cup in Havana, to achieve more support for the representation of Cubans in the competitions to come to be higher.

Joel Angelino: "I have never ceased being Cuban"