How do we cool off? 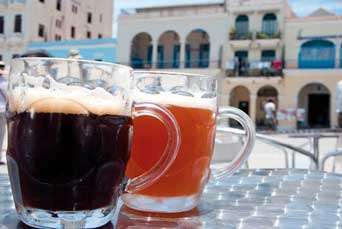 The heat is on! Well, officially at least, because it’s always hot in Cuba. But it is July and summer is underway. People are looking summery, sweating buckets and longing for a beach or swimming pool to cool off. Hence, I would like to invite you to explore Cuba for other ways to find relief from this heat, namely, with many of our refreshing beverages.

On any street on the island, you can find a street vendor selling “granizado,” or snow cones, from small pushcarts especially designed for that purpose. They are built with a holding area for a large block of ice, which the vendor shaves with a special tool. The snow cone is served in a little cup with syrup poured over the ice in the flavor picked by the customer. The vendor pushes his car through the city’s hottest streets, quenching parched throats like a desert oasis. In Havana we use the word “granizado,” but elsewhere on the island these treats are referred to as “raspado,” which literally means “scraped.”

If you want to take it up a notch, try a Mojito criollo. This cocktail was initially known as a Draque, a reference to the surname of the famous English pirate Francis Drake. According to Cuban writer José Juan Arrom, in an article from his book From Where the Palm Trees Grow, the Draque was described as “a popular drink among workers, made up of sugarcane spirit, sugar, lemon and yerba buena (Cuban mint).” It was also known as vino criollo, but it’s not completely clear how it became known as the famous Mojito. In 1898, when United States troops landed on the beaches of Siboney and Daiquiri in Santiago de Cuba dressed in smotheringly hot uniforms, their Cuban hosts served them large quantities of Mojitos to help them refresh themselves.

Ice is said to have come to Cuba in 1805. And ice is used to make the quintessential Daiquiri, Hemingway’s favorite. The best Daiquiris in Cuba – and perhaps in the world — are made on the corner of Obispo and Monserrate streets in Havana. In his book, Arrom recounts an anecdote about the origins of this tasty cocktail. It was first prepared in the mines of Daiquirí, near the town of El Cobre in Santiago de Cuba. Jennings Cox, who worked for the Spanish American Iron Company, wanted to cool off with a stronger drink. So he left out the mojito’s yerba buena and chilled the drink with ice. “Rum a la Daiquirí” is how the new mixture was called at first.

And we can’t leave out the ever-present cerveza, or beer. In Cuba, it has a lot of prestige and heat. This beverage, as old as bread itself, was first enjoyed in Cuba after it was reportedly smuggled in from Jamaica. It was not until 1762, when Havana was occupied by the British, that it became more widely known. Some documents refer to more than 100 brands of beer in 19th-century Cuba. One thing is sure: it has always been a mediator in a friendly conversation or a heated dispute.

In the latter half of the 19th century, with the opening of the La Tropical brewery, malt began to become popular. This beverage, a derivative of the beer-making  process, is like a non-fermented barley infusion. In Cuba it is said to have come out of an attempt to make ale more “drinkable” by diluting its bitter taste with Cuban molasses and syrups. What is certain is that it has always been very popular as a dietary supplement for the elderly, children and breastfeeding mothers. Drinking cold and mixed with milk is an almost exclusively Cuban custom.

And we have more. Guarapo! Juice extracted straight from sugar cane, it is the essential ingredient in Cuban rum. It is a delight served cold over ice. And gives you energy! At least, that’s what our elders say. Anywhere there’s a guarapera, or guarapo stand, there’s a line. It is like healthy fuel for continuing the journey.

Following along these natural lines, we have the indispensable pru from eastern Cuba. What is it? Pru is a sweet tea made from roots, brought to the eastern region by colonizers, slaves and freemen who immigrated to the island after the Haitian Revolution in the late 18th century. This herb infusion is left to ferment and you drink it cold. Some people call it “alley champagne.” If you don’t pay attention during the fermentation process, the pressure that builds up inside the bottles holding the pru causes them to explode or sends the tops flying. So if you’re going to drink one, be careful when opening. Years ago, this beverage was exclusive to eastern Cuba, but now it is made and sold all over the country.

We could go on. Who has not given in to the temptation of fruit shakes? Mamey, mango, banana, guava – they’re all delicious. And what Cuban has not tasted the exotic champola made from soursop; or tamarind juice, which makes us pucker up our faces and keep drinking, or a super-refreshing lemonade with shaved ice. Many are our options for combating the summer heat.

And you are now arriving. Have you decided on one?

The best of times

Descemer Bueno: Making and being a part of history