Descemer Bueno: Making and being a part of history 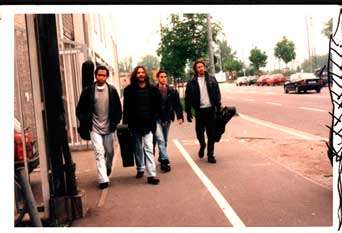 “I didn’t really like the idea of being a musician; it didn’t fit with my personality. I was more of a military type. I wanted to be a Camilito (military academy student), but, you know, they convinced me otherwise. My Aunt Farah María also was an influence. You can just imagine what it was like having an aunt like her at a time when she was at the top of the charts.”

Those were the words of Descemer Bueno in an interview with a reporter. He has become a leading figure in the Cuban alternative music scene, an essential reference in discussing the birth this type of sound in the national arts environment. It is a sound that is beginning to pique the interest of independent labels and major transnational record companies alike.

Descemer first became known as a member of Estado de Ánimo, a band that is fundamental to tracing the earliest elements of the transnational movement that is now emerging among a layer of young Cuban musicians with a solid academic training and a real mix of musical interests. The band was created on the initiative of Equis Alfonso, and its members included musicians who later became famous, such as keyboard player Roberto Carcassés, trumpeter Julito Padrón, saxophonists Yosvany Terry and Alexander Batista and guitarists Ahmesito Barroso and Élmer Ferrer.

From 1991 to 1997, Estado de Ánimo collaborated successfully with singer-songwriter Santiago Feliú, who had a decisive influence on Bueno, especially his spirituality. The group also created its own repertoire, including songs by Descemer. While Estado de Ánimo never recorded an album, it left a deep imprint on Bueno, who says it was one of the bands with which he has felt best in his career.

After Estado de Ánimo dissolved, Bueno got involved in a project that was very important in the 1990s Cuban jazz scene: the group Columna B, which had its own unique sound, and did not fit any particular style or pattern. During a tour in New York, the group shared the stage with musicians like saxophonist Steve Coleman and was praised by others like trumpeter Wynton Marsalis. Columna B recorded a couple of records, one of which has not been released.

After that, Descemer designed one of the most significant works of his career to date, the album Sé feliz, a compilation of boleros composed by him and sung by Fernando Álvarez, with orchestration by Yosvany Terry and Roberto Carcassés. That album’s immediate precedent was this bassist and composer’s contribution of a song to the soundtrack of the film Violeta.

Sé feliz is memorable not just because it is the last recording that Fernando Álvarez ever made, but also because it showed that while two generations — distant in age — may have different approaches to the conception of Cuban music, that does not pose any obstacle to working together on a project, and if there is talent on both sides, their collaboration produces a harmonious result of tremendous value.

Since he began living in the United States in 2000, Bueno has made headlines for his participation in the celebrated CD President Alien, by the group Yerba Buena, and as the front man for the groups Siete Rayo and Cubiche. In addition, as a producer or contributor with his songs, he has worked with performers like Haydée Milanés, Yusa, Kelvis Ochoa, Gema y Pavel, William Vivanco, Diana Fuentes, Luz Casals, Enrique Iglesias and Juan Luis Guerra.

As an exponent of an urban sound with a strong contemporary vibe, Descemer Bueno is a musician with a vocation for making and being a part of history, as evidenced by the recognition he has won with awards like the Goya and four ASCAP prizes, being number one on the Billboard charts more than once and many nominations for the Grammy and Latin Grammy awards. Over and above these honors, which give him international celebrity and prestige, he has said in various interviews, like the one he gave Ariel Fernández Díaz:

“…I want it to be very clear why I keep coming here and working with Cuban musicians who still live here. That is, I have a commitment to Cuban culture that goes beyond politics. …This whole time has been very hard. The cold. I never thought I would be prepared for 33 degrees below zero. The distance and being far away from the people you love. Havana is a heart that pumps my blood powerfully. I dream about Havana all the time”.

A house and its ghosts

The poetic synthesis of Wifredo Lam