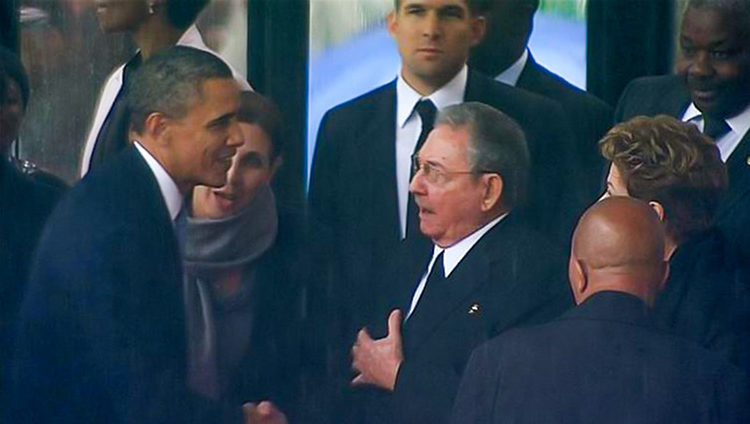 During the terms of Obama, rhetoric became less aggressive on both sides and there were no stress situations / Photo: Raquel Perez.

For a couple of years, the governments of Cuba and the US have held a series of negotiations in different areas of common interest. It is a dialogue that both sides describe as technical but could well be the prelude for a deeper and political negotiation.

Topics discussed so far are related to ecological disasters, migration, search and rescue, aviation security, mail services, seismology and military relations in the Guantanamo base.

Interestingly, the US did not want to include in the agenda the fight against drug trafficking.

In some of these points they have reached agreements with good results. The dialogue on aviation safety, for example, allowed a satisfactory bilateral coordination during the US plane that in September crossed Cuban airspace and crashed in Jamaica.

However, they still haven’t addressed the core issues of the conflict, embargo, nationalized American properties, the financing of the Cuban opposition, human rights, the inclusion of Cuba on a list of terrorist countries, prisoners of both countries and Guantanamo Bay.

Cuban top authorities have repeatedly offered sit down and negotiate on any issue that Washington brings to the table but based on 3 principles: the talks should be among equals, recognizing the sovereignty of states and without interfering in the internal affairs of the other.

Cuban analysts say that these principles “are etched in stone” and that are accepted by the UN but recognize that sometimes before US found it difficult to sit down and negotiate as equals with a small island located in their “backyard”, of scarce resources and only 12 million inhabitants.

Also, when Havana says talk “among equals” is because the controversial issues such as human rights, they would not only debate on dissidents. They will also include the situation in the US, extrajudicial detentions, torture, targeted assassinations and police violence.

Some of the previous approaches failed because Cuba did not accept US demands. At different times, the US made it a condition the cease of the Cuban support to Latin American revolutionary movements, the withdrawal of its troops from Africa, the break in relations with the USSR or the change of political system.

One of the most pressing and immediate issues the two countries are facing is the prison being served by three Cuban agents in the US and an American in Cuba. While Washington calls for unconditional release, Havana proposes “humanitarian solution,” a swap that benefits the 4 detainees.

The White House insists that Cuba should release Alan Gross unilaterally because his detention is the main obstacle for the bilateral approach. Even in 2010 the US stopped all contacts to pressure Havana, but two years later they resumed dialogue.

For the Cuban government the release of its 3 agents, who are considered heroes in Cuba, is also a very sensitive issue that they will certainly include in the agenda. But in any case it doesn’t seems an impediment to negotiate before other issues if its partner so requests.

During the terms of Obama, rhetoric became less aggressive on both sides and there were no stress situations / Photo: Raquel Perez.

In Cuba no one knows for sure if finally Obama will take a decisive step while he is in office but many believe that there were never better conditions, not even in the government of James Carter, when diplomatic missions were opened and maritime and fishing agreements were signed.

During the trms of Obama there have not been situations of tension and mutual discourse is less aggressive. Most of the emigrants, including business leaders, support the approach and The New York Times has issued 6 editorials requesting a change of policy towards Cuba.

Perhaps the biggest problem they are facing today is the intensifying of the financial persecution of Cuba but that might not be a policy aimed especially towards the island but an impact by being on the US list of countries supporting terrorism, something very easy for Obama to change.

In his last editorial, The New York Times notes as the old coping mechanisms are inconsistent with the new environment. While a program of quick visas to lure Cuban doctors to defect missions is still in place, the US government publicly acknowledges the role of the Cuban doctors in Africa and collaborates with them in the fight against Ebola.

In the international arena, Latin America and its European allies are pushing the US to cease its hostile policy towards Cuba. Governments in the region included Cuba in the Summit of the Americas despite protests from Washington, while Brussels is negotiating an agreement with Havana.

Cuban politicians would rather not talk on the basis of speculation and so avoid touching the subject but seem to maintain a certain expectation, as if they were convinced that the next move is for the counterparty.

On the street, the ordinary citizen does not look very hopeful, is not the first time an approach occurs and it is frustrated after the first step. Moreover, in some way, all have already become accustomed to live like this, 70 percent of Cuban suffer the embargo from the day they were born.

Secrets of a Camagüey party

Renata Mézenov Sa: "Theater is like life, it exists if you do it"