The Cuban Adjustment Act: If they were to remove it … if they weren’t… 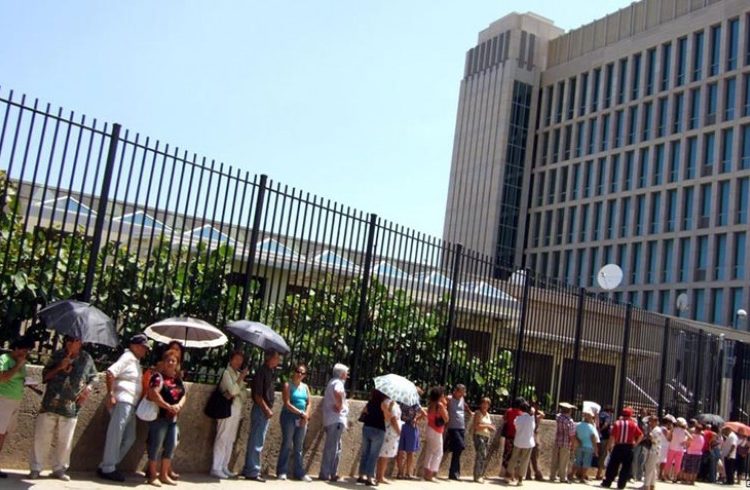 According to Cuban parties if the Cuban Adjustment Act to be repealed, Cubans could get more tourist visas to USA, because the US Interests Section in Havana (SINA by its Spanish acronym) would not see them as suspects of illegally staying in America.

According to Cuban parties, the repeal of the Cuban Adjustment Act would mean the general good for their own citizens, who could migrate in a more organized way, legally, and would visit relatives in USA more easily, by being able to obtain a greater number of tourism visas, without the fear of SINA for them to stay in the country illegally.

But, does removing the law would be a solution to the fact that many Cubans still want to leave the country? The Cuban economist, political scientist and researcher Esteban Morales flatly considers it would do it. “It would be a solution, because Cubans leave with danger, because the law is a criminal stimulus to do it. If repealed and categories of visas are extended (for example working visas), it would be better. The truth is that while there is an incentive to immigrate illegally, migratory relations between the two countries would not be normal. ”

Others do not think so. OnCuba contacted some Cubans within the country, and others currently residing in USA. As with many aspects relating to the negotiation process, opinions on the appropriateness of the Cuban Adjustment Act to remain in force are also divided.

Alexis Contreras (48), waiter of a restaurant in Miami, says that the repeal of the Act does not mean, in any case, an improvement for Cubans living on the island:

“To remove it only harms Cubans. People do not leave a country by a law of another country but because they live badly in theirs. I do not see a relationship between improvement of bilateral relations and the situation of Cubans. The problem there (in Cuba) is that the system does not work and people do not have freedom to create, work, and produce. People are not motivated “.

Luis Solis Valdés (49), nurse living in Miami, says that “it is not easy to remove the Cuban Adjustment Act, as it has helped Cubans to leave Cuba and help their families. I do not know what would happen to the Cubans from there if people here who benefited from the law do not help them. I do not think its end to help producing a more legal migration ; that can be done without removing it”.

Another of those who agreed to give his opinion was Alain Hernandez (43), Sales Consultant in USA, “(with the start of bilateral talks) I did not expect to be repealed, because there is much money around that. In my case, I do not care about the future of the law, because all my close family is already here. I do not think that removing it will bring benefit to the Cubans in Cuba; on the contrary, it rather harms them as it is one of the ways they have to live here. ”

It seems that the solution to emigration does not exclusively depend on removing a law, but involves building a country in which its inhabitants can see flourish their individual and collective projects rigged to a logical material welfare.

“Achieving this goal is a challenge for all governments in the world. Cuba has encountered obstacles in it for half a century, the reestablishment of relations could change that, or could either prove our own inability to generate the model to which we aspire, “said a 26 years old journalist of in a Cuban official media.

He adds: “Cuba has all the potential for a prosperous future, I do not think that Cubans care much about under what social system they live as long as some social privileges to be maintained or benefit them”.

If the Act remains, will there be noise in the negotiations?

Esteban Morales has been particularly aware of the bilateral talks. Morales believes that maintaining the law could affect the course of negotiations.

“The law will affect, and I hope that to achieve the key objectives, which are to reestablish diplomatic relations, they finally agree to remove the Law and politics (Dry Feet / Wet Feet), or at least to put it into elimination perspective fairly quickly, “said Morales, who also believes that” we must tighten them (the US parts) taking advantage of the circumstances that that would affect the main objectives of the negotiations.”

Morales insists that, even in the context in which the restoration of diplomatic relations will be discussed, they insist on staying in place, “which is already affecting the main goal of the talks. What they will do depends on how Cuba to insist that, with this law and politics, there can not be normal diplomatic relations. ”

According to Morales, “we would have to dig a little deeper into why they (USA) insist on keeping it (the Act)”.

Another Cuban media professional recalls that the immigration issue is a priority of the US political agenda and will remain so for a long time. In his opinion, in the midst of change it is unlikely that the Cuban Adjustment Act to remain intact. A normalization of relations with Cuba , he warns, can push a bipartisan majority to remove it.

Remittances by Cuban residents in the US have been crucial for many Cubans on the island to cover their first order needs.

“It is important to remember that this legislation is an instrument of the Cold War, which ended more than a quarter century ago. To be honest , I confess that (the Act) has an advantage: that the inhabitants of a third world country are received in mass in the richest nation on earth , because that represents remittances and a better future for them and their families. But the human cost of that privilege is immense. ”

The figures of the latest illegal migration from Cuba to the coast of Florida are not new. Between last December 1st to 16, 132 Cuban rafters were intercepted, sighted at sea or landed on the beaches of South Florida. After December 17, and until January 1st, 2015, that number exceeded 420. The Coast Guard has repatriated to Cuba extremely high figures of immigrants who have come to represent more than 100 returnees in one day.

The number of Cuban migrants arriving in USA increased by 75% between 2013 and 2014, up to 3 722 people, according to the Coast Guard, which is considered the highest number of rafters arrivals since 2008. They have no data, of course, of Cubans lost at sea or those who do not reach touching US soil and are returned to the island.

In this regard, another interviewee comments: “When there are many deaths on a law as it is the case, my vote is unique: it should disappear. And this law should disappear as a natural part of the process of rapprochement, which would be taken by Cuba as a goodwill gesture and a step of ample proportions for this process. ”

Then, he refers to a crucial point: “The talks may be favorable, but none of the two delegations can aspire to leave fully satisfied at all points of their agenda. I do think that while there be respect between the two countries , recognizing the current differences of positions, these conversations can be a first step; an excellent first step to a great future. ”

After December 17 the numbers of Cubans who have ventured into the sea to touch US soil have increased by the fear to cease the privileges of Dry Foot / Wet Foot politics.

Exactly that was one of the questions we made to people we contacted for this work, given the highly complex and unpredictable scenario: What future do you see for Cuba if the normalization of relations -despite differences both sides- reach a happy end? Do you have faith in a positive future for Cubans?

David Curbelo, a university professor of ISPJAE, replied: “Of course I have faith in the future of Cuba. The fact that many Cubans want to leave the country has nothing to do with American laws. In my view, it is a situation caused by economic problems rather than political. I think the normalization of diplomatic relations, together with the necessary change of mentality and generation will be deciding factors in the country’s future. ”

Esteban Morales replies, “I have faith in the positive future for Cubans; Obama’s proposals are not a panacea, but we must accept its challenges. International relations are a field of endless battle and Cuba must be willing, as it has always been, to fight for their interests. Opportunities should not be missed and this is an opportunity, although it is also a challenge. Time passes, and I always hope that the future can be better, although not easier. “

Little fabric for dressing as bride

From the human and the divine