Cuba Sabe: from the farm to the table (going through the kitchen)

Tastings, lectures, practical sessions and a sample of organic products, marked the opening day of the 2nd Cuba Sabe International Culinary Workshop, which began this Thursday in Havana.

by Eric Caraballoso
in Cuba
0 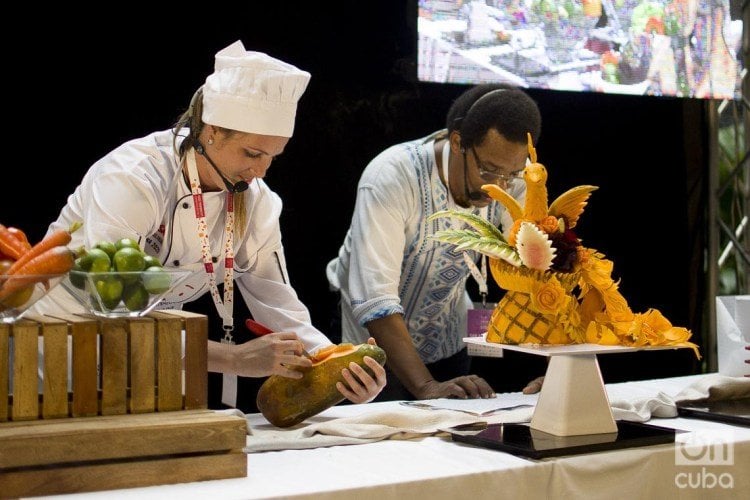 In less than a decade, Osmel Corrales turned an eroded and low-yielding plot of land into a paradigm of organic farming in Cuba. The goats and his perseverance were the key so that El Olivo farm, in the tourist valley of Viñales, not only improve the land, but also gain fame for the variety and quality of its cheese.

This was confirmed by the participants at the 2nd Cuba Sabe International Culinary Workshop, which began its sessions this Thursday at the Iberoestar Grand Packard Hotel in Havana, with the presence of chefs, producers, sommeliers, academics, artists and specialized journalists.

Corrales was one of the Cuban farmers who exhibited their artisanal organic products during the opening day, which was attended by Cuban President Miguel Díaz-Canel and Prime Minister Manuel Marrero, among other invited personalities.

Cheese with paprika, rosemary, a la guayabita del pinar, yogurt and cream made by him and his workers were shown―and tasted―along with cheeses and sausages from other independent producers, as an example of the potential of a movement still insufficiently known and exploited on the island, and of which Cuba Sabe aims to showcase.

The cheeses, milk and other products of El Olivo―including pork, rabbit, fish and vegetables―have as their main destination the menu of a private restaurant of the same name, located in the town of Viñales itself, following the premise “from the farm to the table,” but also schools, hospitals and daycare centers “as a contribution to the country’s economy,” Corrales said in exclusive statements to OnCuba.

Work aimed at the genetic improvement of his herd, a natural diet through a system of rotation by pens, and a monthly monitoring of the milk’s quality, have allowed him to achieve a yield of seven liters per kilogram of cheese, while the techniques learned in a course in Spain have made it possible for him to increase the variety and durability of his flagship product, to the point of being able to do without imported varieties such as Parmesan, mozzarella and gouda.

“Our goal is to increase production and, in the future, market our products beyond the restaurant,” says Corrales, who appreciates the opportunity to exhibit his creations before the select auditorium of Cuba Sabe, and for whom multiplying on the island experiences as his is not at all far-fetched.

“We haven’t done anything out of this world,” he says, “just work. El Olivo’s experience can be multiplied and, in fact, we have transmitted our knowledge in different meetings held in the country, and many producers have passed through the farm to learn. I would like this knowledge not only to remain among us, but that it be taken advantage of by others, and that more mini-industries exist to produce cheeses and other organic products, because this is a win-win for the producers but also our communities, our people, all Cubans.”

Tastes and knowledge of Cuba (and beyond)

Lis Cuesta, president of the organizing committee of Cuba Sabe, defined this second edition of the event as “a true cultural pairing.” It will run until January 11 and has as its main sponsors the Paradiso Agency of the Ministry of Culture, the Culinary Association of Cuba and the Iberoestar hotel chain.

In her words of welcome, Cuesta―who is Paradiso’s academic services manager and wife of President Díaz-Canel―confirmed the scope of the workshop, which since its birth last 2019 promotes knowledge about culinary art and seeks to rescue and promote traditions and knowledge associated with Cuban cuisine, recently declared cultural heritage of the island.

Its aim is to investigate the most authentic roots of Cuban gastronomy, such as “an identity that inexorably passes through the kitchen,” but also dialogues with contemporary and avant-garde expressions, and with other culinary traditions and their imprint on Cuba. This is the case of Italian cuisine, protagonist in the opening day of practical sessions and tastings by chefs from that European nation.

Meanwhile, the culinary link with other artistic manifestations, particularly the visual arts, was the center of part of the evening session, in which an exhibition of gastronomic photography was inaugurated and workshops on fruit and vegetable carvings were held, as well as bread modeling. Cuban and Dominican Republic chefs shared their knowledge with professors from the Academy of San Alejandro, Havana’s bicentennial institution honored at the event.

One of this Thursday’s relevant moments was the master lecture by Brazilian theologian Frei Betto, who spoke on food sovereignty and the paradoxes of a planet with more than 800 million hungry people, in which, however, tons of food are thrown away every day. Betto, whose mother Stella authored books on regional cuisine in Minas Gerais, sprinkled his lecture with personal anecdotes and revealed himself as an advocate of cuisine as “the fundamental culture of human beings.”

“We can live without quantum physics, but not without food,” he reflected, while considering cuisine as “an identity for life,” which accompanies people even when they migrate to other regions and countries. In addition, he celebrated the realization of events such as Cuba Sabe to consolidate that identity in the face of the predominant standardization in contemporary global society.

His point of view is shared by chef Eddy Fernández, president of the Culinary Association of Cuba and one of the main promoters of the declaration of Cuban cuisine as a cultural heritage. For him, that achievement, far from an end, is really a beginning, a motivation to continue growing, and Cuba Sabe is an ideal platform for this.

“The most complex thing is to maintain what has been achieved and move forward,” he said to OnCuba. “That’s why we need more events like this one, more training and exchange sessions, because in this way we multiply the knowledge about our cuisine, we keep it alive, and we also enrich it, we update it to achieve a better quality of life based on our own resources and possibilities.

“We don’t deny the shortages that exist in our country, as the United States’ harassment cannot be denied, but even in the midst of these problems, our aim is to multiply gastronomic knowledge and exchange, make visible the best experiences and link production to culinary creation. Just like we look on the bright side of things, the more problems, the more preparation. This is an ajiaco (Cuban stew) at boiling point, and it won’t stop.”