Cuba is not closing its door to U.S. investments 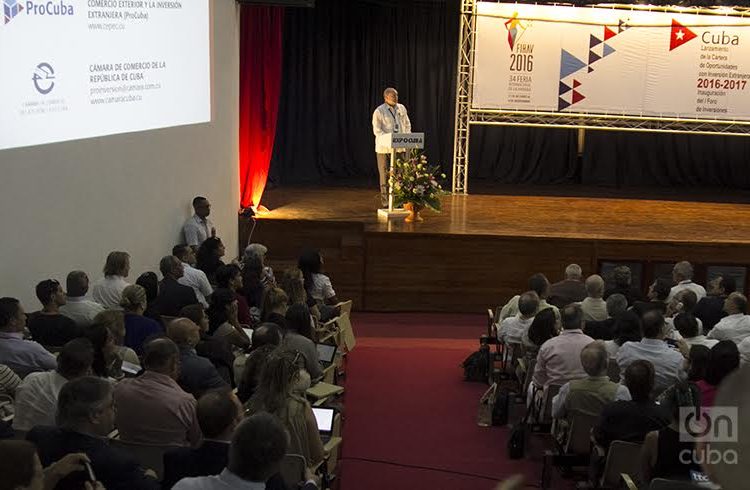 “U.S. investors are not an exception for Cuba” and they have “the same opportunities as the rest of the world,” affirmed this Friday Déborah Rivas, general director of foreign investments of the island’s Ministry of Foreign Trade and Investments (MINCEX).

Questioned by OnCuba during the promotional presentation of the 2nd Investment Forum to be held in the already nearby Havana International Trade Fair 2017, Rivas pointed out that the Cuban government is seeking to “diversify the origin of foreign investments” on the island and has “no objection to or particular policy for possible investments from the United States.”

“Foreign investment’s public policy does not distinguish the origin of the capital. Cuba makes no distinctions between its potential investors because they are from one or another country,” she affirmed.

In relation to the possibility of a greater restriction in the commercial exchanges between the two country’s after last June’s announcements by President Donald Trump in Miami, Rivas said that Cuba has not changed “at all” its position in relation to possible business deals with U.S. companies.

“It is the current U.S. administration which can have changed or will change in the future, in addition to maintaining the blockade that continues being a fundamental obstacle for Cuba’s economic development,” she added.

“U.S. companies are restricted by their country’s laws and not by the regulatory framework established by the Cuban government,” she noted.

A forum to boost and facilitate investments

The 2nd Investment Forum that will be held in FIHAV 2017 will seek to boost and facilitate foreign investment in Cuba, one of the Cuban government’s principal bets for the island’s wished-for economic leap.

During its presentation last Friday in the Havana Convention Center, Déborah Rivas commented that the meeting will be held October 31-November 1, and one of its principal moments will be Minister Rodrigo Malmierca’s presentation of the 2017-2018 Opportunities Portfolio.

This time the portfolio will include more than 450 projects – in 2016 there were 395 – which will offer “important investment opportunities” in the island’s principal sectors, Rivas specified.

Another of the forum’s high points will be the bilateral meetings between foreign businesspeople and their Cuban counterparts in search of materializing business possibilities. These meetings can be organized beforehand through a website established for this, in which those interested can register up until October 20 and find the program as well as information about the legal framework and foreign investment policy in Cuba.

During the second day of sessions two panels will be held – one about the agribusiness sector and another about the industrial sector – in which the representatives of Cuban ministries and companies will make presentations about their respective sectors in the presence of potential foreign investors.

A moment has also been set aside for the Mariel Special Development Zone (ZEDM), the star foreign investment project in Cuba, which has already been functioning for four years.

According to Wendy Miranda, ZEDM director of coordination and procedures, the presentation will be made in the morning of November 1 and will be an opportunity to exchange with the investors already present there and with those interested in establishing themselves there, as well as to show the new approved projects, as is done each year in the context of FIHAV.

In addition, the new ZEDM website – made together with the University of Computer Sciences (UCI) – and a promotional video that updates potential investors about the vision and current perspectives of the development zone will be presented.

With the incorporation last March of projects from Portugal, Panama, Brazil and Spain, the users of the ZEDM now amount to 24 from 11 countries, including Cuba, and eight of which were already established there at the time.

The 2nd Investment Forum will be closed on the evening of November 1 and it is expected that agreements that can materialize in the following months will emerge from it.

During its first version in FIHAV 2016, around 100 businesspeople from 38 countries participated, and they made more than 200 dates with Cuban entities. From these dates investments in sectors like tourism and the use of renewable energy were born, according to Déborah Rivas.

According to comments by MINCEX Minister Rodrigo Malmierca in the opening of the 1st Investment Forum in FIHAV 2016, Cuba needs some two billion dollars in foreign direct capital to make its economy advance, a figure that up until now the country hasn’t been able to attract.

At that time, Malmierca underlined that foreign direct investment is an essential way of having access to foreign financial sources and said that they will be impossible to attract if improvisations are made, previous mistakes are repeated or the possible investments are not studied in detail.

U.S. withdraws more than half of its embassy personnel in Cuba

U.S. withdraws more than half of its embassy personnel in Cuba

Cuba: “This is a decision that is hasty and it will affect relations”