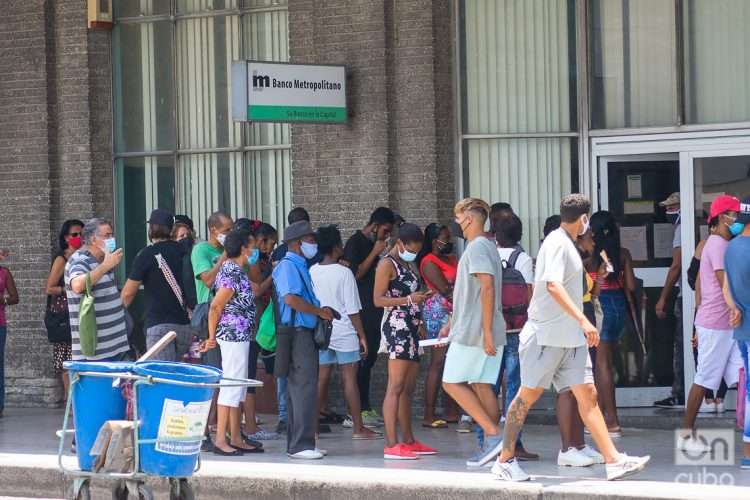 The Central Bank at last recognized the devaluation of the peso that had been occurring since 2020 in the Cuban informal market, but only for a segment of the economy. Thus, economic policy officially returns to multiple exchange rates, and abandons, for now, the unified official exchange rate of 24, which was one of the priority objectives of the so-called “monetary reorganization” of 2021.

The most novel and positive thing is that private enterprises and cooperatives will be able to sell foreign currency at the new exchange rate, and that banks will accept and exchange physical dollars in these operations at 120, as well as foreign currency transfers. The latter unlocks one of the major impediments that remittances had in order to reach Cuba through formal financial channels. Another favorable element could be associated with tourism, since foreign visitors will be able to formally exchange their currencies at a higher exchange rate.

In essence, the measures represent a return to the way the Cuban exchange market worked from 1995 to 2001: with a managed floatation of the retail rate and maintaining the duality with the fixed official exchange rate for the state business sector. The only difference is that now the retail rate (120) is not only for individuals’ cash operations, but also applies to foreign currency that arrives by bank transfer, in addition to including private enterprises, farmers and cooperatives.

Since at first the banks and exchange houses (Cadeca) will only buy and not sell foreign currency, the measure could be highly inflationary, since it leads to an additional, probably important, issuance of Cuban pesos. Sustained use of this market with the aim of collecting foreign currency for the State, as explained in the Mesa Redonda television program, would make the foreign exchange market a permanent net issuer of Cuban pesos. The State must guarantee its income based on taxes and profits from state enterprises, not use the foreign exchange market for these purposes. In other words, the new official foreign exchange market reappears with a serious design error.

One of the most important things that Minister Alejandro Gil said during his appearance in the Mesa Redonda was when he said that the young economists of the Central Bank insisted that this cannot be solved with monetary measures alone, that the exchange rate is a reflection of “fundamentals” of the economy. What the minister did not add is that the fundamentals of the economy do not change if the State maintains a monopoly over the economy.

Here are some examples of actions that can effectively change “the fundamentals” of the economy:1