The November of Entrepreneurs event, held in Havana, favored the exchange and learning about the digital environment of representatives of the Cuban private sector.

Eric Caraballoso
in Entrepreneurship in Cuba
0 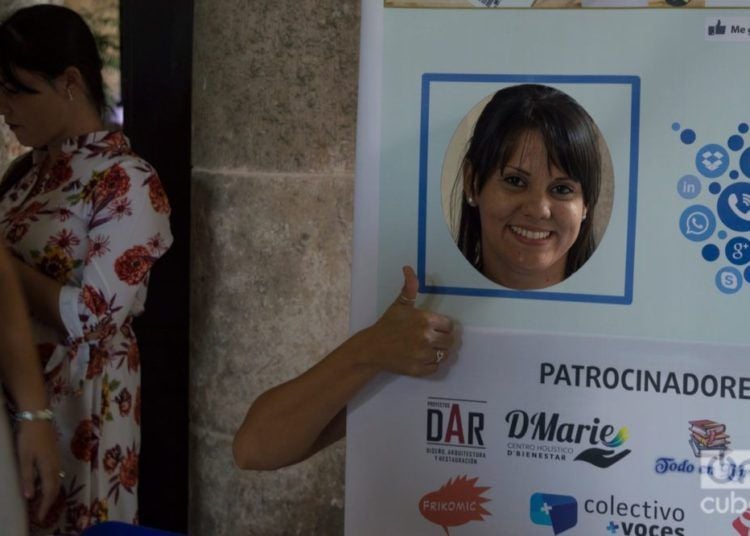 At the November of Entrepreneurs event, representatives of the Cuban private sector learned more about the social media as channels to give publicity to their businesses. Photo: Otmaro Rodríguez.

Since its first edition, Maricel Ponvert hasn’t missed a November of Entrepreneurs, an event that has been organized for three years by the CubaEmprende project in Old Havana’s Félix Varela Center.

“I think the idea that we entrepreneurs can meet to share and learn is wonderful,” the head of the D’Marie Wellness Holistic Center, a salon that provides beauty, relaxation and mental and physical wellness services, as it announces on its Facebook profile, said to OnCuba.

This time her presence was precisely motivated by the development on the online environment. Social media management and digital marketing were the thematic cores of the event that, along with experts in these fields, brought together some 140 representatives of the island’s private sector on November 22 and 23.

For most of them, like for Ponvert, the social media are not an unknown space, but the lack of specialized knowledge, plus the usual difficulties in connectivity on the island, have limited their projection in these platforms. The CubaEmprende initiative sought to have an influence on that reality and fuel the participants’ interest.

“Even though I no longer am so young, I have to keep abreast of ‘the latest’ to make my enterprise advance,” explained the owner of D’Marie, who recognized that she was “already on the social media, but I did it my way” and she expects that “with what I learned now and the advice received, I can have a more professional presence and create new opportunities with the clients.”

Lectures by specialists, panels, group dynamics and presentation of successful experiences were the arsenal placed at the disposition of the entrepreneurs during the two “intense and profitable” days, according to Ponvert, descriptions with which, she affirmed, the rest of the participants must agree with, even the most experienced.

Carlos Arce, social media manager of Gervet, a private agency of digital services focused on the development of software, digital marketing and graphic design, is also of the same opinion. This computer engineer was one of the entrepreneurs who shared his professional results, in particular as collaborator of the Darocha Beauty Salon, whose Facebook profile was one of the finalists of a contest promoted during the event.

Based on his experience, Arce highlighted the importance for Cuban entrepreneurs to have an awareness that the social media is not just a space for personal issues, as many usually assume, “but that they can also use them for their commercial interests.”

“What’s most important is that they know that their businesses can, or rather need, to have an online presence,” he affirmed to OnCuba, “that they can manage their profiles on the media to the benefit of the brand, to give publicity, exchange with their objective public to help create customer loyalty, and even work on crisis management with initially dissatisfied clients, whose negative appreciation can become positive through a personalized attention on the social media.”

In his opinion, it is “extremely valuable” that CubaEmprende help connect “those who don’t have all the awareness and knowledge about the subject with those who do have experience and dominate the necessary tools,” and that, in addition, “it favors the work in group and the socialization of that knowledge so that people see at what level they are and up to where they can go to benefit their enterprise.”

The exchange between entrepreneurs and the learning of the most positive experiences is, for the director of CubaEmprende, Jorge Mandilego, “the greatest wealth” of the event.

“For us it is very important that the participants learn from the good experiences of their colleagues, so that they see themselves in that mirror,” he commented to OnCuba, “and also that they exchange with specialists and enterprises that have volunteered to selflessly share their experiences, who we wish to recognize for this.”

The selection of this edition of November of Entrepreneurs was to generate “a view of a line of work that is totally up to date,” even when the nearing of the coming into force of the new regulations for private work in Cuba would suppose another tempting aspect to privilege due to the controversies and doubts they are creating.

“Before the event we were asking ourselves if we should dedicate it to the highly topical subject of the new regulations, but we thought that, although it is never a waste of time dedicating time to them, it shouldn’t be to continue complaining because it is a reality that is imposed as part of the ecosystem in which Cuban entrepreneurs have to insert themselves starting now,” Mandilego explained. “What they can’t do is stop what they are doing: they must get to know the regulations, adapt to the new circumstances and evolve, with innovation, willpower and inventiveness, to do everything that the current scenario allows them. And in that new scenario are the internet and the social media, with perspectives to enhance their presence in Cuba.”

“Until a short while ago businesses didn’t think about digital marketing and they were satisfied with a small page, but today they are starting to generate online strategies, and even to measure their results. This is something we are interested in strengthening, without privileging a specific technology or platform, but rather using everything that exists, because its effective use can favor a growth in Cuban private enterprise.”

Mandilego’s appraisal is shared by Dayron José Avello, a computer science engineer and one of the experts summoned by CubaEmprende for the third edition of its event.

Avello, who works in the International Retinitis Pigmentosa Center, advises to not be on the social media because “it’s in fashion,” but rather “to analyze which tool contributes to the commercial objectives, which social media provides the most benefits.”

In addition to creating their own website or blog, “depending on the resources at hand,” this community manager suggests that entrepreneurs with little experience on the subject privilege the presence of their businesses on Facebook, “a social media that is greatly used in the world and which allows for having an incidence on audiences,” and also on Instagram and YouTube, “because of the value of the images and videos to connect with people.”

“The rhetoric of the social media is visual and has a direct incidence on interactions, on reactions that can generate contents,” he affirmed to OnCuba, and in the specific case of YouTube he explained that, although it is associated to the phenomenon of the YouTubers, it can also “be very useful to visualize the values of a certain business, to create videos in the first person that are an invitation to a service or that show experiences of clients’ consumption.”

As strong points for a vision of the future, Avello highlighted the Cuban entrepreneurs’ interest – confirmed by him in the event – “in inserting themselves efficiently in these digital spaces” and also the change that has taken place in connectivity on the island.

“Internet’s present panorama in Cuba isn’t even that of last year,” he said. “It still isn’t ideal, but there is a growing connectivity, with programs like Nauta Hogar [internet at home], with a significant connection speed. And it is important that the entrepreneurs understand that to the extent that the possibilities for access increase, the needs to deal with these spaces also increase to meet their need for information and their commercial objectives.”

“The fact that there is greater access to internet means there’s a greater presence of potential clients from Cuba, and also greater possibilities to post their products and services. Cuban entrepreneurs need to take advantage of that opportunity to be more efficient and competitive.”