carrasco
in Tourism in Cuba
0 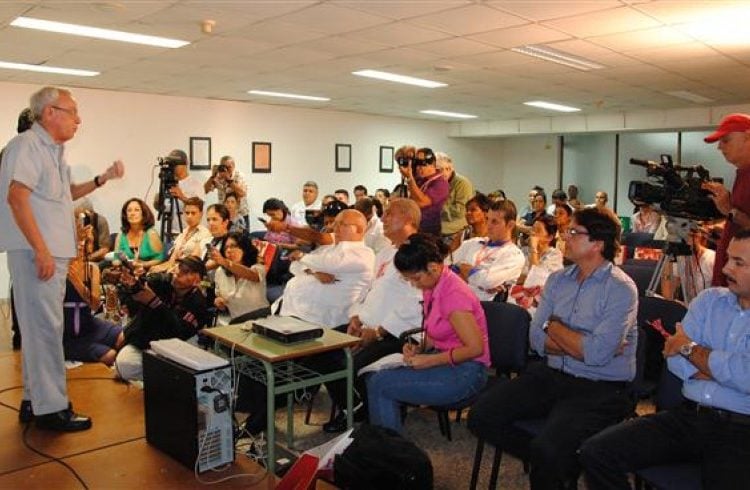 What we are gastronomically? And what should our kitchen express?, were among the issues discussed by Dr. Eusebio Leal Spengler, Historian of the city, in his inaugural lecture at the Saborear lo cubano Event, V Meeting for the Rescue and Development of Culinary Culture in Cuba.

“It would be a mechanical reduction to take strictly to the table the issue of food, remarked Eusebio Leal. The table is a sequel, it’s a necessity. But mostly it is a cultural and even geographical expression, mainly in countries whose culinary tradition is very important.

Habanaguanex Tourist Company, which develops the Saborear lo Cubano event until February 15, now has nearly 40 restaurants and 60 cafes in the historic center of Old Havana, declared World Heritage Site by UNESCO, along with its fortifications system.

The gastronomy of these Habaguanex establishments is now a major attraction in Old Havana, and has accompanied the restoration and social work undertaken in the area by the Office of the City Historian.

What we are gastronomically?

Eusebio Leal talked about the roots of Cuban cuisine and the introduction on the island of some of its identity elements.

“When we read the chronicles of the time, we realize how they introduced in Cuba habits of eating and drinking that were nonexistent on the island. So, sugarcane entered from Santo Domingo. Also rice from Philippines from the East and from the Spanish Valencia, where the Arabs had grown it.

“Slowly oranges and lemons settled here, which came through Mexico to the Antilles from China. Now is not the cry is heard in Cuba of the Chinese orange. And sometimes it is difficult to make a good orange juice.

“They brought the beans from Mexico and Guatemala. Tomato comes from Central America. And although there are many birds’ eggs, the truth is that the favorites were the hens of Castile, over the guinea fowl eggs, which still some people eat hesitatingly because they do not like them.

“Luckily, Columbus had the idea of buying in Seville the first couple of pigs, which fortunately multiplied and have now grown to become an essential part of Cuban life. Hopefully it will remain so, if they manage to lower prices. ”

“We are either original or perish”

In the context of the number of new restaurants and businesses looking for the venture from the food, Eusebio Leal threw the question: Is it or is not desirable in the field of gastronomy competition that makes only the most powerful, stronger, healthier, those who survive?

Leal admits happily that competition will mandatorily bring imagination and reinterpretation of the Cuban identity.

“Our primary duty as institutions that cultivate this role is that through our food the country is known. We have a responsibility to establish this communication, because the food cannot be seen only as an economic issue, though it reports profits. ”

In his view, in this competition will prevail exclusively only what has quality and is profitable.

“No business can sustain without an accurate idea of what things cost. Often splendid local will go in usufruct without the idea of what is spent on electricity, water, management, and wages.

“Most of the businesses that you think are flourishing are born failures. Everything has to go from small to larger, if possible. You should go to the stars by the way of the asperities. The employee who wants to leave to become the owner needs to know how things work, is not that wrong and ask for the loan to get the business, and then cannot even pay the interest. ”

One idea that he defended as essential was to check the originality of the cuisine, which in Cuba has been characterized by poor quality of services and shortages.

“We are either original or perish. In Old Havana we have our small hotels, which have to be triumphant and magnificent. We must study our guests. And look what you can put in the food and what not.

“See if there are diabetic clients and what policy we have for a growing world population of diabetics. Do we have pastry masters making sweets for diabetics? You have to study all this, if we do not, we’re failures. ”

Habaguanex: a food for Cubans

As is customary in his character, Eusebio Leal appeared jovial and innovative regarding Habaguanex and its nearest future as a mainstay of the cuisine in Old Havana.

“He who is bored should move aside. It’s the best. I’d rather have next to me a detractor than a boring person. St. Francis of Assisi said something like this: give me crosses, gimme sacrifices, gimme efforts, but do not put a mediocre on my side.

“Let’s make of Habaguanex a small company able to move, to change and offer that which is the reason for this event. That Cuban identity is our hallmark.

“Habaguanex has the opportunity to win all the appreciation of the Cuban people, which is most important. What we do has to be, first, for Cubans, “he said.

The press and the lessons of History

Changes in countries to participate in V World Series of Boxing