The Sahara Desert (or Great Desert, as the Arabs call it) is the largest warm desert in the world, but it would rank third when compared to the cold deserts of Antarctica and the Arctic. 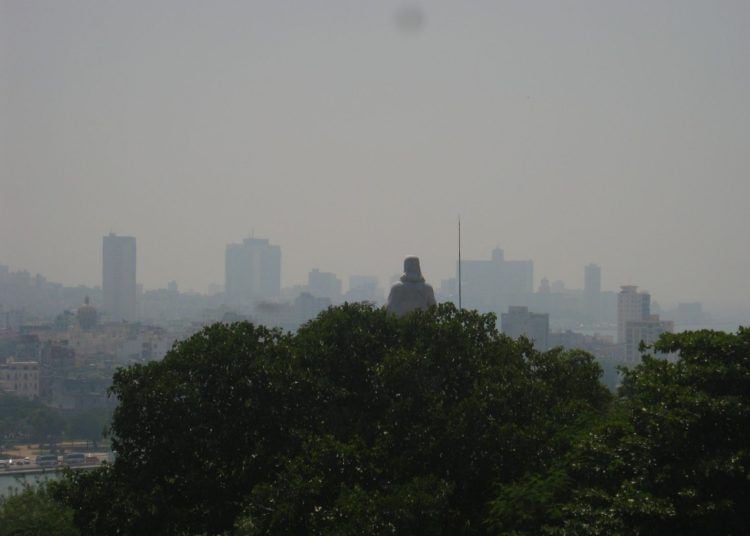 Havana under a dense layer of Sahara Dust. Photograph taken by Meteorologist Elier Pila from the Loma de Casablanca, in Havana, on August 15, 2014 at 3:18 p.m.

The arrival of dust from the distant Sahara to our geographical area is one of the phenomena that typically occurs in June, July, and early August, although it can sometimes occur as early as spring or last until autumn in the northern hemisphere, especially in the easternmost part of the Caribbean Sea.

The Sahara Desert (or Great Desert, as the Arabs call it) is the largest warm desert in the world, but it would rank third when compared to the cold deserts of Antarctica and the Arctic.

The Sahara covers almost all of North Africa and has an extension of 9,400,000 km2, including ten countries: Algeria, Chad, Egypt, Libya, Morocco, Mauritania, Mali, Niger, the Sahrawi Arab Democratic Republic, Sudan and Tunisia. It has an extension as large as China or the United States. The highest point is the Emi Koussi Mountain, at 3,455 meters above mean sea level, and the lowest point is the Qattara Depression, at 133 meters below sea level.

The climate there has had many changes over time. Hundreds of thousands of years ago it was wet, and it became dry in response to a cycle repeated every 41,000 years or so. This cycle responds to regular changes in the rotation axis of our planet. According to this prediction, in about 15,000 years (around the year 17,000), the Sahara will become green again. Too bad we won’t see it….

The highest temperature recorded in modern times has been 59 ºC, and the lowest is -21 ºC. A characteristic of the hot deserts is the great insolation that exists (in the Sahara, it reaches 3,723 hours of sunshine per year in Kufrah). During the day the temperatures go up a great deal, while, being an area so dry and almost totally clear of clouds, the heat obtained is lost by irradiation into outer space at night and low temperatures come.

It is precisely these extremes temperatures that have led, over the course of thousands of years, to the fragmentation of the surface rocks into very small pieces, forming the sand that today covers the entire extension of the desert. Some of the sand dunes, or mounds of sand that are formed by the wind, can reach 180 meters in height.

Half of the Desert receives less than 20 millimeters of rain a year, and the other half does not exceed 100 mm of annual rainfall. As comparative data, a summer storm in Cuba or Florida can generate 50 to 100 mm of rain in just a few minutes. 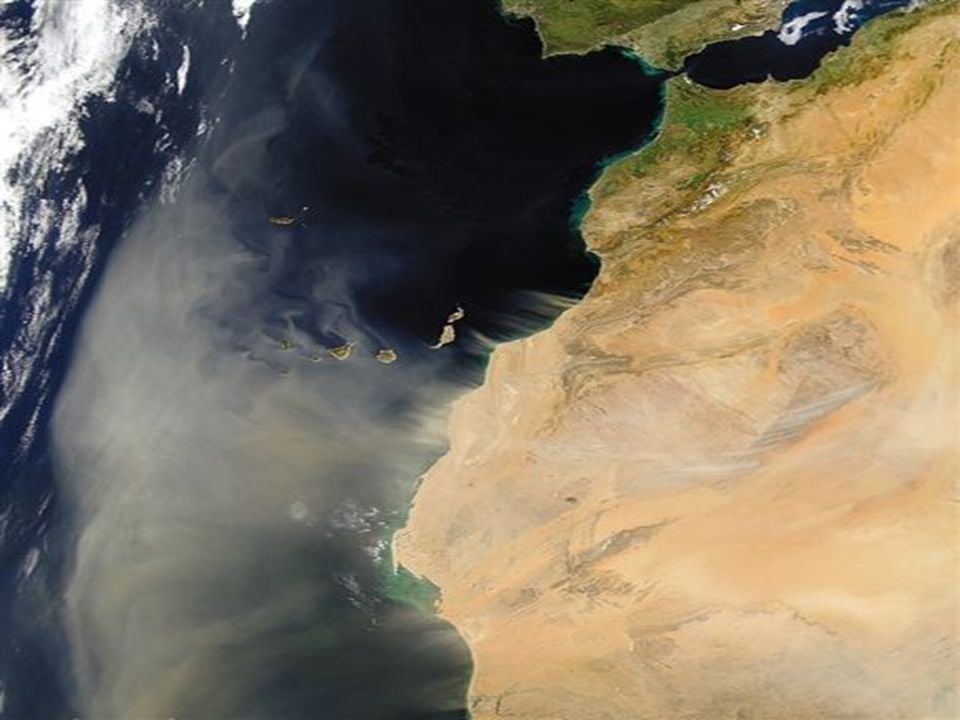 In the Great Desert, winds blow from north to east and generate so-called sand storms. This a generally strong wind, which is known as Sirocco when it reaches the Mediterranean. It often reaches hurricane-force speeds in North Africa, and even reaches southern Europe.

Sand storms kick up large amounts of sand and dust. The sand, thicker and heavier than dust, rises and falls almost immediately in the desert itself. But the dust, made up of very fine particles, rises in the atmosphere from 1.5 to almost 6 kilometers high, and is then transported by the east wind, to begin its journey through the Atlantic Ocean.

Of course, the further east a place is, the more dust will hit it. In this case, the Canary Islands and Puerto Rico take the greatest amount of particles. In the Canary Islands they call it “Calima” and it is identified because it reduces visibility and deposits dust anywhere. In Puerto Rico, the same thing happens, the dust covers cars and everything outside, and the sky turns whitish, without any mist.

For the Caribbean region, including Cuba, Yucatan, Florida, the Mexican and U.S. coasts of the Gulf of Mexico, even as far west as the U.S. state of Texas, the Sahara Dust adds another environmental problem that is in full study, along with droughts and intense rains, tropical storms and hurricanes and the changes that the global climate is undergoing.

The arrival each year of large amounts of dust particles from the Sahara has a marked unfavorable impact on different ecosystems, and also possibly on human health in general. In those clouds comes not only dust, but also iron ore, salt, silica, and other mineral compounds. In the same way, organic pollutants arrive, such as viruses, fungi, bacteria, and pathogenic mites, capable of causing damage, not only to man, but also to plants and animals.

Although, on the other hand, African dust has very beneficial effects: it suppresses or weakens Atlantic hurricanes.

Let us recall that the main ingredient for a tropical cyclone to form, develop and intensify is the existence of a deep layer of moisture in the atmosphere. Since the air accompanying the Sahara dust is very dry, sometimes as little as 30 {bb302c39ef77509544c7d3ea992cb94710211e0fa5985a4a3940706d9b0380de} of relative humidity, it then acts as a powerful inhibitor for the development and intensification of tropical cyclones. It also causes the temperature to rise with height (which is called temperature inversion) and suppresses or decreases rainfall. 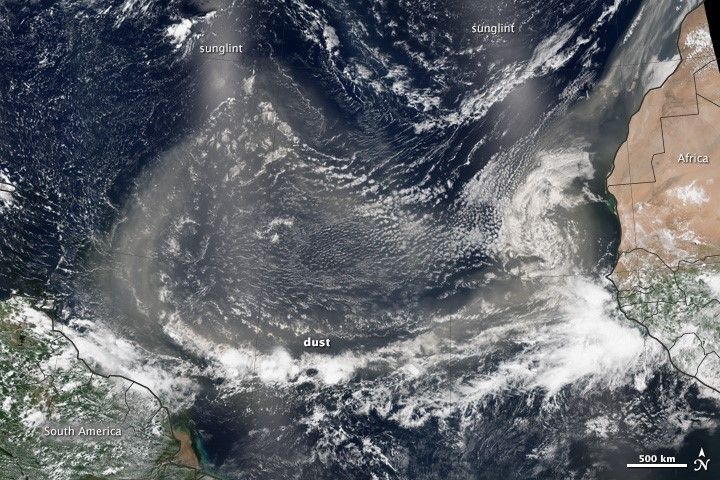 Just a few years ago, there was no awareness of the existence of Sahara Dust moving through the atmosphere over great distances. You could see the whitish sky and it was thought it was just haze. But now the technology of meteorological satellites makes it possible to see those dust clouds in the Sahara sandstorms when they form, and to follow them step by step as they move west across the Atlantic.

There are also specialized numerical models for forecasting the displacement and concentration of dust clouds.

Thanks to that we can know that, at the present time, there is an eruption of Sahara Dust, that the models indicate that it will reach the Caribbean and will move throughout the western Caribbean to the west, throughout the Gulf of Mexico to the eastern part of that country and the U.S. state of Texas during the next few days, covering much of the area by early next week.

In this video you can see an animation of those forecast maps. But also note that the calculated dust concentrations for the western Caribbean are fortunately very low.

This time the Caribbean and Florida won’t have to worry. We can expect very little cyclonic activity in the Atlantic these days and also a certain decrease in rainfall while this situation lasts.

So if you wake up one morning in this newly begun month of July, or perhaps the beginning of August, and notice our cities covered with a whitish to gray veil, there is no doubt: you will be seeing the already famous Sahara Dust, which arrives and will continue to arrive.

*This text was originally published in 2016 by OnCuba.