Although they appeal to the compliance of protection measures, in an election year the political class doesn’t seem interested in increasing police work at the risk of losing popularity. 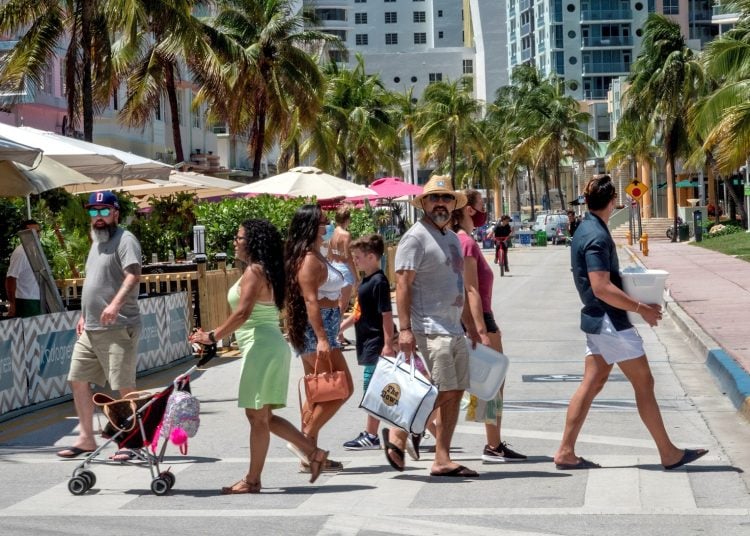 A group of people walks through Miami Beach this June 24, 2020 without respecting the mandatory use of the protective mask. Photo: Cristóbal Herrera/EFE.

The COVID-19 pandemic’s comeback in Florida seems to be the never-ending story. This Wednesday the highest figure was reached in absolute terms: 5,508 new cases, 2,222 more than the previous day, with which the state increases the figure to 109,014.

“This reality points to two alternatives. Or the coronavirus is reaching its second wave and the economic and social reopening has contributed to it. Or the political authorities don¡t have any strength to protect the population from an almost unknown and very, very serious disease,” epidemiologist Jesús de Armas clearly tells OnCuba.

When he speaks of force to enforce compliance with protection measures, De Armas refers to the fact that the police is unable to control the activities of young people on the streets. Although the use of the mask is mandatory, many young people still don’t wear it even in the crowded streets, as in Miami Beach. County Mayor Carlos Giménez warned Tuesday night that he was going to be very tough, but did not refer to a particularly dissuasive measure, as authorities in Broward County, north of Miami, did, who this Wednesday announced fines of 15,000 dollars for anyone caught on the street without a mask on.

The new record of cases in Florida, in general, occurs parallel to that of Miami-Dade County, which has its own figures. That is, 957 new cases, 374 more than Tuesday, a third higher, for a total of 27,779 since the beginning of March.

This is also due to the increase in screening tests, which showed an increase of 25% of patients, 15% more than admitted by the Center for Disease Control to maintain confinement in homes and the closing of commercial activities.

But five months away from the elections, politicians are reluctant to return to confinement because at least in Miami-Dade County the elections this year are characterized by a total movement of responsibilities. For example, Mayor Giménez concludes his term and aspires to be a federal congressman. At least three councilors are going to compete for mayor. The same number of candidates want to be elected to these positions and even on the school board there will be two elections.

“It is absolutely appalling that for what it’s worth politicians don’t care about public health,” De Armas emphasized.