Hundreds of people responded to animal protection activists’ call to a pilgrimage allowed by the Havanan authorities. Many attended with their pets. 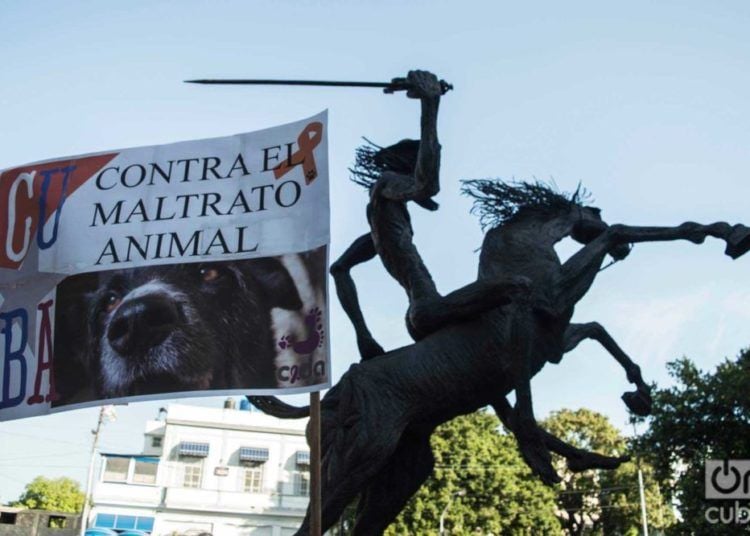 Mili was picked up one night from a garbage container in Havana. A birth defect in one of her front legs had condemned her to abandonment and almost certain death. But, unlike other less fortunate dogs, her story is one of hope.

This Sunday, Mili was one of the participants in the Awareness Walk, a pilgrimage to the tomb of American philanthropist Jeanette Ryder ―founder in 1906 of the Bando de Piedad for the protection of children, animals and plants― convened by animal protection activists in the Cuban capital.

The dog made the whole march from El Quijote Park, in Havana’s centrally located corner of 23 and J in Vedado, to Colón Cemetery, in a small carriage pushed by activist Luisa Pérez. They were not alone.

Hundreds of people and dogs walked with them about two kilometers of the way, carrying signs and orange bows and shouting slogans against the mistreatment of animals and in favor of the approval in Cuba of a law for their protection and welfare.

1. March against animal abuse, April 7, 2019 in Havana. In the center, Mili, in a carriage pushed by Luisa Pérez. Photo: Otmaro Rodríguez.

March against animal abuse, April 7, 2019 in Havana. In the center, Mili, in a carriage pushed by Luisa Pérez. Photo: Otmaro Rodríguez.

“I brought Mili as an example to show that we need to raise people’s awareness and have the government’s support to finally approve the law,” Pérez told OnCuba shortly before the start of the march approved by the city authorities, a novelty on the island, where public activities independent of the government and official organizations are not allowed.

“That this march has been approved is an achievement, and also the fact that so many people have responded to the call. It is necessary to take advantage of this momentum to continue supporting our pets and animals in general,” she added.

Beatriz Batista, one of the organizers of the march, fully agrees with Luisa. This young student of Social Communication, who declares herself an independent protector and obtained government authorization for the march, thinks that what happened on Sunday “will mark a before and after in the fight against animal abuse in Cuba.”

“It’s not easy to see the situation of many abandoned animals, who roam the streets without food and safe medical care and are mistreated by irresponsible people,” she told OnCuba. “That’s why this type of actions is very important at this time, when Cuban society is gaining awareness and is increasingly involved in this issue.

“The number of persons and organizations that support animals and report acts of abuse is growing. It is time that we all strive together in this cause and that there be a response from the authorities. The fact that we have been able to make this pilgrimage gives us a lot of hope,” said Batista, one of the speakers at the grave of Ryder, who died in Havana in April 1931 and in whose honor Dog Day is celebrated on the island.

A cause of many

The call, made by Beatriz and Odalys Jaramillo, had as a backdrop the growing demands of animal rights activists and organizations to end the existing legal void in Cuba, in the context of the Cuban constitutional reform and consistent with the subsequent drawing up of new laws.

Also, the increase in connectivity on the island and access to the internet through mobile phones, which facilitated the rapid dissemination of the march and added many participants.

Claudia Díaz, member of CEDA (Cubans in Defense of Animals), one of the groups that voluntarily carry out awareness campaigns, promote the adoption and sterilization of abandoned animals and denounce acts of abuse, believes that the main result of this day is that it makes the activists’ work even more visible and helps to sensitize many people.

“That people see us, that they know about our work, that they know the reasons for our claims, will allow more and more people to join this effort and we can celebrate the approval of the law,” she said. “It doesn’t matter who organized the march; as soon as we learned about it, we offered our support and all the necessary promotion directly and through social networks, because it isn’t about one group or another but a common goal.”

It seems that now the future looks promising. Many children and young people came to El Quijote Park, with their families and pets, in support of the cause of their faithful companions.

“Dogs feel and suffer abuse just like people. They are very affectionate and excellent friends when they are treated well,” Antonio Hidalgo Toranzo, who studies double bass at a music school, told OnCuba.

“No one who is really good can mistreat a dog or any other animal. We have to take care of them and protect them so that they feel good,” added the boy, before the approving eyes of his mother Yenny and his dog Zarigüeya.

Nearby, singer-songwriter Silvio Rodríguez also publicly showed his support. The author of songs like “Ojalá” and “Unicornio” left his guitar at home this Sunday and joined, along with part of his family, the hundreds of protesters.

“This is a very sensitive issue because it touches Cuban families. People can think differently about many things, but love of animals is a common denominator of many families and people in Cuba, although sadly there are some who mistreat them, ” Silvio, who confessed to being “an animal lover,” said to OnCuba.

“I am here following my daughter Violeta, who is an animal protection activist, and we are supporting this activity with the family. We are ‘animal lovers,’ we have always been like that, like almost everyone who comes from the countryside, and we oppose any kind of abuse,” said the musician who, however, is aware that Cuba is an underdeveloped country where it is still necessary to use animals to pull or in agriculture.

“But one thing is using animals for the benefit of people and another that they be mistreated, abused. That’s why I’m in favor of an animal welfare law and would fully support it if it’s proposed,” he concluded.

More than two hours later, in the participants’ tribute to Jeanette Ryder in Colón Cemetery, I saw Mili again. She was one of the dogs that came to the grave of the American philanthropist and her dog Rinti, who after the death of her owner did not leave the grave, refused to eat and because of her faithfulness was buried next to her.

Luisa, although sweaty, looked optimistic. “I hope that next year, in the next march, we’ll have the law approved or at least in the process. For Mili and for those that, like her, could be saved. “

1. Mili, at the tomb of Jeanette Ryder her dog Rinti, at the end of the march against animal abuse, April 7, 2019 in Havana. Photo: Otmaro Rodríguez.

Mili, at the tomb of Jeanette Ryder her dog Rinti, at the end of the march against animal abuse, April 7, 2019 in Havana. Photo: Otmaro Rodríguez.