While in Cuba the 8th Congress of the Communist Party of Cuba (PCC) is taking place, which involves the political farewell of Raúl Castro, documents were released about a plot to fake an accident on a flight between Prague and Havana and another linked to the 1961 Bay of Pigs invasion. 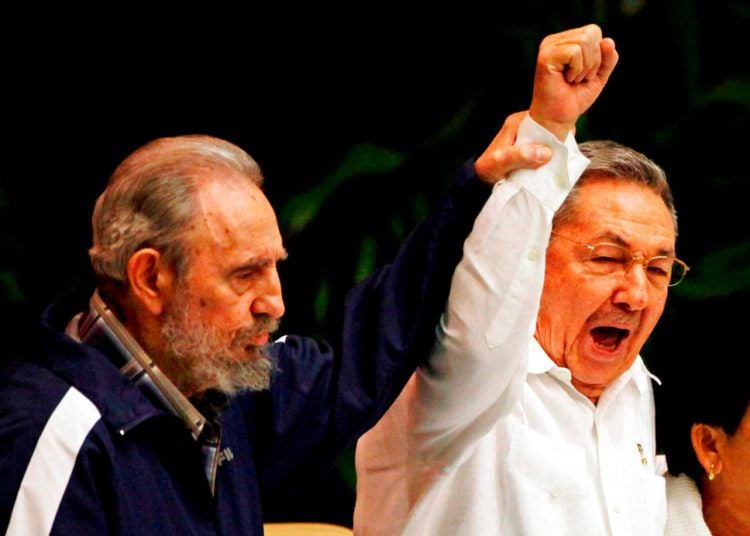 Fidel Castro raises his brother Raúl Castro’s hand, while they sing the anthem of the socialist international during the 6th Congress of the Communist Party in Havana, on April 19, 2011. Photo: Javier Galeano/AP/Archive.

Documents declassified this Friday by the independent National Security Archive give an account of two plots planned by the U.S. Central Intelligence Agency (CIA) to assassinate Cuban leaders Fidel and Raúl Castro in the 1960s.

While in Cuba the 8th Congress of the Communist Party of Cuba (PCC) is taking place, which is expected to mean the political farewell of Raúl Castro, documents were released about a plot to fake an accident on a flight between Prague and Havana and another linked to the 1961 Bay of Pigs invasion.

The documents, six in total and including memos and telegrams, account for the arrangements made by CIA agents, which included the offer of payment of “$10,000 or a reasonable amount in excess of that figure” to “incur at risk of organizing a plane accident.”

The person in charge of the CIA on the island in 1960, William J. Murray, discussed this plan with the Cuban pilot José Raúl Martínez, who worked for Cubana Airlines, the company contracted for a charter flight to Prague in which Raúl Castro and other members of his delegation were traveling.

“The pilot, who the CIA had previously recruited as an intelligence asset in Cuba, ‘asked to be assured that in the event of his [own] death, the United States would see to it that his two sons received a university education,’” the National Security Archive indicated.

The plot was never carried out because the pilot “did not have the opportunity to organize an accident” on the return leg of the flight, which took place on July 21, 1960.

Those involved had analyzed the possibility of an engine overheating on land or of a landing “about three hours from Cuba.” Murray had previously received a counter-order nullifying the plot, although he had no opportunity to communicate with the pilot.

Another attempt, but this time to assassinate Fidel Castro, started being hatched weeks after the plan against Raúl Castro, the National Security Archive noted.

In August 1960, the CIA’s director of covert operations, Richard Bissell, authorized “a delicate mission” that required action like that of the organized gangs, with the aim of liquidating Fidel Castro and “increasing the chances of success” of the Bay of Pigs operation, in which Cubans trained and financed by the United States participated in 1961 and which ultimately failed.

For the operation, the CIA’s Technical Services Division “developed a pill that had the elements of rapid solubility, high lethal content, and little or no traceability,” of which six were produced that were expected to be used in one of Fidel Castro’s meals or drinks.

The plot, which did not come to fruition, “was called off shortly after the Bay of Pigs episode.”

As described by Major General (R) Fabián Escalante Font in his book La Guerra Secreta: Operación ZR/Rifle, more than 600 attacks were planned against the life of former Cuban President Fidel Castro Ruz from 1958 to 2000, which were dismantled by the State Security organs in different phases of their execution, according to the investigation carried out by the author, founder of the Cuban Security services, which he led in 1976.

Peter Kornbluh, who heads the U.S. National Security Archive’s Cuba project, noted that “like the defeat of the CIA-led Bay of Pigs invasion marked a historic turning point for the young revolution,” the “official beginning of the post-Castro era marks an important turning point for the future of Cuba.”