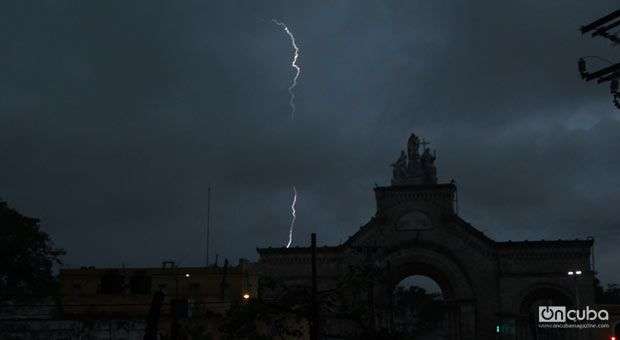 Lightning and thunders always caused some fascination. Rather, I perceived them as the legends of the land of our greatest storyteller Onelio Jorge Cardoso. Folk stories of the Cuban countryside, with a little fiction. Of course, without ignoring the inescapable laws of physics. But the storms of these days in Havana made me face reality. A few days ago Ernesto, an Eduardo Saborit Stadium guard in Playa municipality, confirmed me that on a recent Sunday, around 4 pm, a lightning bolt took the life of a young football player who disregarded his advice and went to play as a goalkeeper under a torrential downpour, while going for a friendly match between the youth who usually attend every afternoon the west Havana sports facility.

Denis, 17, only child, raised his arm to call for the ball and received a lightning that penetrated his wet body and left through the feet. A white and fast bolt. This was how Ernesto perceived it: “it raised him about a meter off the ground … It seems that the water served as conductor of lightning and all players were shot down like a bowling pin. The goalkeeper was on the floor without moving. The others recovered some and staggering took refuge in the stands. Two others were hospitalized. I warned them to leave when the thunder storm started but they did not listen “the watchman lamented.

The number of deaths by lightning in Cuba in the period 1987-2005, was 65 per year, according to experts from the Institute of Meteorology (INSMET). Some of the consequences of surviving a lightning strike are loss of consciousness, temporary amnesia or total absence of memory, irregular operation of organs either temporary or permanent; death of limbs or organs and loss of the ability to feel the cold: it’s not uncommon for these people getting colds, flu, pneumonia and hypothermia that can lead to death, as confirmed by specialists.

This summer has been with a complex weather situation in these parts. Many Havana people can’t stop surprising, especially in this last August and September from the recurring thunderstorms and heavy rains, absent from some years

September is one of the rainiest months in Cuba. The influence of the Atlantic anticyclone is significantly reduced compared to July and August, which, coupled with the frequent passage of waves and tropical low pressure systems, favors the increase in rainfall. It is also the month with the highest frequency of tropical cyclones in our region, so that cyclonic activity increases markedly on Cuba from August, although the frequency of hurricanes that affect is somewhat lower than October. Associated with direct or indirect influence of tropical cyclones usually occur in September heavy rainfall events, according to the experts from that  institution attached to the Academy of Sciences of Cuba.

As usual, in September remain intense heat conditions typical of summer in Cuba, although the temperature falls slightly from August. The high relative humidity and the prevalence of  weak winds most of the country leads to the persistence of hot and very hot sensations in humans. Since 1981 Cuba has been warmer than normal.

The danger of these thunderstorms is not a fiction. Now we see it. And we shouldn’t left aside the tips: within a building doors and windows must be closed, you should stay clear from power lines, disconnect all appliances possible, do not use landline phones, cellular or wireless only, stay away from metal objects and avoid touching your hair , among others. While inside a vehicle you should also close all doors and windows, do not touch the metal parts and never exit it while such weather conditions remain. And if the person is caught by the storm outdoors should try to get to a building or a vehicle, away from trees, poles or any tall object, find an area slightly lower than the adjacent land, not lay down (moist soil is highly conductive of electricity), try to duck as much as possible, but touching the ground only if you are wearing shoes, just to mention some of the most important measures.

The size of his hope