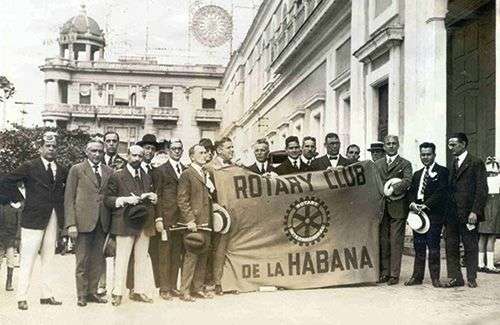 The Rotary Club of Havana could have celebrated its 100th anniversary on April 29th this year, if Rotary International had not revoked all Cuban club charters in 1979, leaving no active Cuban Rotarians to celebrate.

Today, on the doorstep of the celebration and in the context of renewed U.S.-Cuban relations, Rotary has an opportunity to restart in Cuba.

In 1979 Rotary International, the world’s largest service organization with clubs in over 120 countries, decided that it could no longer maintain active clubs in several places, including Cuba, which faced United States sanctions.

The Havana Rotary Club was the first Rotary Club to be founded outside an English speaking country, and within 30 years of its founding there were close to 60 other clubs across the island.

Rotary had such a strong presence in Cuba that Havana was selected as the site of the 1940 Rotary International Convention.

It was here in Havana that Rotary issued a desperate call for peace on the doorstep to World War II. Cuban nationals served on three different occasions as President of Rotary International.

As far as public record goes the Cuban government never had a problem with Rotary. As with other social and service organizations present on the island (such as the Odd Fellows, Masons, and Red Cross) respect for local laws and sovereignty is expected.

As Rotary has an apolitical mandate and exists in almost every country in the world respecting local law this will not be a problem in Cuba.

Rotary’s Polio Plus program to eliminate polio transmission worldwide is just one example of the potential collaborative space that the organization has in common with Cuba.

Cultural exchange, projects focused on the environment, healthcare, ensuring clean water, university scholarships and working towards global friendship while respecting identity and celebrating differences are all parts of what makes Rotary what it is.

The 100th anniversary of the founding of the Rotary Club of Havana should be seen as an opportunity for Rotary International to reach out and once again let clubs be chartered on this Caribbean island nation.