mayle
in Migrations in Cuba
0 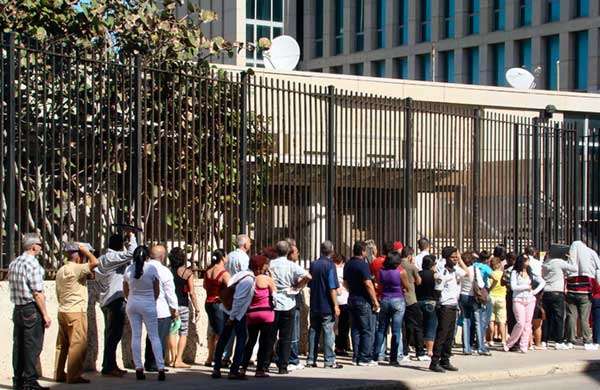 Lynn Roche, head of Press and Culture Office of the US Interest Section in Havana answered in exclusive some questions from OnCuba magazine that “work will continue as usual”,  when asked about the changes in the Cuban Migration Law that came into force this Monday.

Roche said they will continue providing consular services to the same amount of Cuban people (350-400 a day) “For the last three months our office has sped up the appointments with Cuban residing in the country to expedite the process which used to take up to five years. Now they will take a year at most”.

The official stressed her country’s interest that the Cubans that go to the Interest Section can prove they have enough reasons to return to Cuba once they have traveled to the United States.

“We are for a safe and orderly migration and it is of our interests to provide a service to all Cubans that come to us” she added.

The updating measures to the Cuban Migration Law were announced last October and came into force this Monday. Long lines of people are since this morning at the offices of the Identity Card and Registration Population and at Immigration offices to update passports and other paperwork.

Some of the people in line praised the new measure Cubans have been waiting for decades, others show the mistrust and skepticism they feel on this subject. Today a team of OnCuba journalists took Havana streets   to know what the main expectations of the people were. Many refuse to talk. They prefer to wait for days to pass because according to them it is too early to say.

For Ariel, a student at the University of Information Sciences (UCI), who has never traveled outside Cuba, the measure is primarily a glow of hope. He says he is not too worried if in these early days embassies deny him the visa because he believes it is something that will later stabilize, but the first step was the most important.

Maria del Carmen, who was in the office at 17 and K, in the Havana neighborhood of Vedado, is a doctor and although she knew this measure had its specifications, she preferred to go personally to the office, because ‘who knows”, she said, “that amid  the confusion of the first day they don’t even realize I’m a doctor.  She then clarifies “I think this law should be more flexible for certain professions. Or  youngsters will end up not opting for careers that can then become a major obstacle to travel. ”

Jorge and Lucia are the parents of Karina. Today they are since early morning at the identity card office to update their 7 year old daughter’s passport. For them, this is undoubtedly the best of the news of the change of laws because “it was absurd that children couldn’t travel with their parents.”

The new measures have raised many expectations among the Cuban population. How these measures will play on their lives, only time can tell.

Migration Law Creates Expectations in Many