Understanding the Cuban migratory process in its historical chain requires reviewing its stages, all marked by political events.

Rafael Hernández
in Migrations in Cuba
0 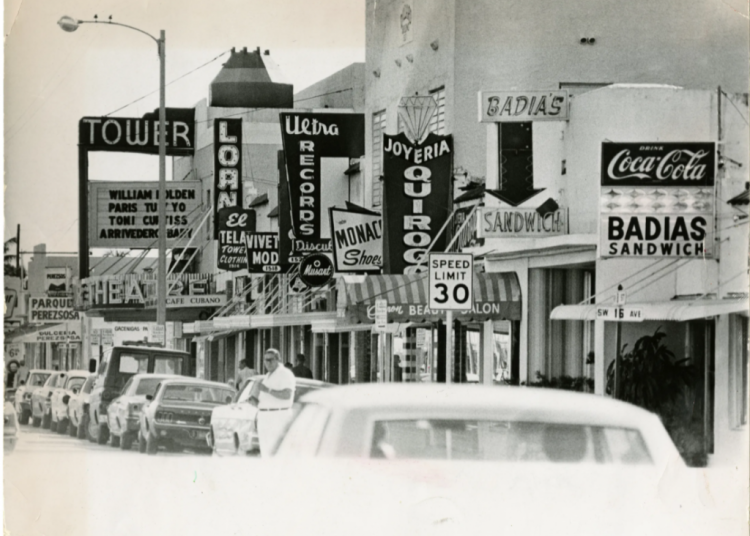 Featured in this photo is a section of Southwest Miami’s 8th Street, known as Calle Ocho, including a variety of stores and the Tower Theater with movie titles in Spanish. This photograph appeared in the Miami News on January 21, 1972. RICHARD GARDNER, at the History Miami Museum.

It will soon be ten years since I wrote “Carta a un joven que se va” (Letter to a young man who is leaving). It was my first post. I sent it to some young bloggers living in Matanzas. They told me it was too long for a post, but they liked it, so they published it. By midnight, there were already more than a hundred comments, and several fights going on, including the editors of La Joven Cuba themselves. I learned then what trolls were, and much more about the dynamics of networks, in particular, what others read from what one wrote. I also learned about the rebound effect, a very special political phenomenon.

Although my message to the hypothetical young man started with a detailed inventory of motivations to leave, some commentators came out to me as if I had completely skipped them. Despite the tone of my letter, where I tried to make it clear from the outset that “my intention is not to dissuade you, nor to warn you, nor to foist on you a patriotic speech,” much less to speak “as a voice of experience or the authority of a teacher,” some reacted as if I wanted to give a study gathering. Those intense responses, however, served to make the letter resonate further, in an arc that ranged from left-wing media to Radio Martí. They also made it known to unsuspecting readers, far more so than any of my modest research on migration since 1980.

Indeed, although my letter was more of a conversation about what it means to emigrate, I had been dealing with the subject since my own youth. It was with Mariel (1980) that some of us here began to try to study and explain it, in its factors and social composition, as well as in its main external cause: the immigration policy specially invented by the United States for us.

That commotion of 1980, and an envelope with photocopies, which Rufino, a friend who is fond of immigration matters, had the good taste to pass me, were the instruments of chance that left me hooked. Thus, following the trail of Lourdes Casal, Rafael Prohías, Alejandro Portes, Raúl Moncarz, Eleanor Rogg, I started writing a paper on the immigration policy of the United States and its reaction to the Cuban Revolution, which I came to present when the Mariel flotilla was still sailing.1

Along this path, I began to retrace the migratory cycles that, since the 19th century, and especially as a result of World War II, had been increasing the rate of departures for the United States, and anticipating a flow that was going to be very high, even if the watershed called Revolution had not arrived. While the numbers were already eloquent, the very nature of the flow after 1959 was not just a matter of numbers.

Understanding this migratory process in its historical chain requires reviewing its stages, all marked by political events. From the departure of the Batista supporters and war criminals in January 1959, the Missile Crisis, the opening of Camarioca and the first migratory agreement, passing through the Varadero-Miami air bridge, the lifting of the prohibitions to visit Cuba and the dialogue with the community, Mariel, until the agreements of 1984 and 1987, the rafters crisis in 1994, the new agreements and their interruption in the summer of 2017, and the rebound in recent years. Without that in-depth look at the problem, it is difficult to analyze what is new in the current situation — and what is not.

In the first wave, 215,000 people left for the United States alone, at a rate of just over 50,000 per year. When the Missile Crisis (1962) interrupted commercial flights, those who had made departure plans were forced to postpone them without a fixed date. They stayed that way until the end of 1965, when the Cuban government would open the port of Camarioca, near Varadero, for all those who wanted to come in search of their relatives. It was the first time that the United States was forced to sign a migration agreement with Cuba, to establish the so-called “Air Bridge,” through which 340,000 people emigrated, at a rate of about 48,000 a year. The Nixon administration put an end to it in 1973, reasoning that “everyone who wanted to leave had already had a chance to do so.”

The most significant thing about those first two waves, however, was their composition. Unlike the labor flow of the second post-war period, in 1959-62 a disproportionate proportion was made up of the upper class — landowners, big businessmen, bankers — who dragged with them white-collar employees and many of the professional force at their service. — lawyers, doctors, engineers, architects, military.

The upper middle class groups that had not been able to leave until October 1962, did so through the 1965 agreements; but also, and increasingly, segments of the lower middle class, such as small merchants and manufacturers, including those nationalized by the 1968 Revolutionary Offensive; professionals not linked to the upper class, such as teachers, administrative employees, plus self-employed workers; and finally, a modest but growing proportion of workers in production and services.

It was thus that as a result of the détente with the United States at the end of the 1970s, the launch of political dialogue with emigration, and in the midst of the Mariel commotion, we began to ask ourselves who those Cubans in Miami really were.

Passionate about the sociology of emigration, Juan Valdés Paz and I let ourselves be carried away by the idea of ​​characterizing the social and class structure of the Cuban enclaves in the North. In a time without digital databases, Excel tables, emails or USBs full of gigabytes, we spent days taking accounts and making tables by hand, between papers with data from the U.S. census in 1970 and 1980, and research reports that others had done on the ground, with samples collected in Dade County, West New York, Union City. In all those papers we had to fish for the answers to our simple question: who were those emigrants?

As expected, the schooling of those who left in the 1960s exceeded primary education. Close to 50% had finished high school and 20% university. The male émigrés with more than twelve grades exceeded almost 9 times the average of Cubans of that level before the Revolution, just as women multiplied by 8 that of Cuban women at that time. That schooling almost reached the average for white Americans.

As if the base they brought from Cuba was not enough, the Cuban Refugee Program created by JFK had granted them financing for student loans, adult education, languages, professional qualification, and other benefits. This unprecedented policy for no other migrant group contrasted sharply with the treatment of those arriving from the South. At the same time, 12% of Cubans had completed university education, compared to 4% of those from Latin America and the Caribbean, and 8% of African-Americans. Only American whites, with 17%, surpassed them.

The occupational level of Cubans between 1960 and 1970 was also higher than that of the rest of the immigrants in the United States. At the same time, by inserting themselves into American society, they had suffered a drop in social and employment status. According to the 1970 Census, 46% of the entire Cuban labor force was employed in the material production sector; 88% of it in the manufacturing industry. Of those who worked in services, half were in commerce. In fact, industry and commerce accounted for 68% of the total.

On the other hand, entrepreneurs and leaders barely reached 2.4% of the employed; and only 11.1% were professionals or related, mainly in personal or community services. These new Cuban-American entrepreneurs — businesspeople or employers — represented approximately a fifth of those who had this occupational status in Cuba. Most of them were among those who arrived in the first four years of the Revolution’s triumph. Those who owned businesses with more than twenty workers used to employ 95% of Cubans.

The other peculiar characteristic of these initial waves was the high labor participation of women, above other Latinas, and even U.S. women. This participation, which quadrupled the level of employment of women in Cuba in 1953, and even doubled that of 1970, seemed to respond precisely to the motivation of compensating for the fall in the economic and social status of the original family in their new immigrant status. Consequently, although there were fewer Cubans than Puerto Ricans in the “white collar” professions, their incorporation into production and services outnumbered them, as well as Latinas in general, whose average was far below.

Women, however, were the ones with lower incomes and a greater number of risk situations. Among the Cubans who received economic aid from the Cuban Refugee Program, at the beginning of the 1970s, 72% were women. According to Lourdes Casal, the typical beneficiary of the program was a woman between 50 and 60 years old, with less than 8 years of education, no ability to speak English, and no experience or occupational skills.

Derived from this high incorporation into salaried work, census data at the end of the 1970s showed an average family income for Cubans 10% below the total population, but clearly higher than for Chicano and Puerto Rican families. The original social composition of these groups, but above all the differentiated policies of the successive U.S. administrations, guided this inequality. The construction of the image of Cubans as separate and different from the rest of Latinos had its origin in these differences, even when those upper-class marks have long since ceased to apply.

Among the demographic traits that distinguished Cubans was age. Compared to the Latino population, the average age of Puerto Ricans and Mexicans in the late 1970s was 20 years. In contrast to this very high presence of children and young people, half of the Cubans were 36 years old and older, even older than the average general population, at that time, of 30 years.

As in the strata of a sedimentary rock, the successive waves of Cuban migration had left a peculiar geological trace. The differences with the society of origin and with the one that received them were clear. The fall in social status was also evident, which implied its proletarianization, in particular for the generations that arrived at working age.

The silhouette of the Cuban projected on that rock was that of a white man, close to 40, with a good educational level, a direct worker in production or commerce, and who had a middle-class culture, that of Cuba before 1959.

In that geological trace, Mariel was like the meteorite in the world dominated by dinosaurs, although in this case it did not exterminate them.