ETECSA sent a personalized notice to its clients with the offer of the four available packages. 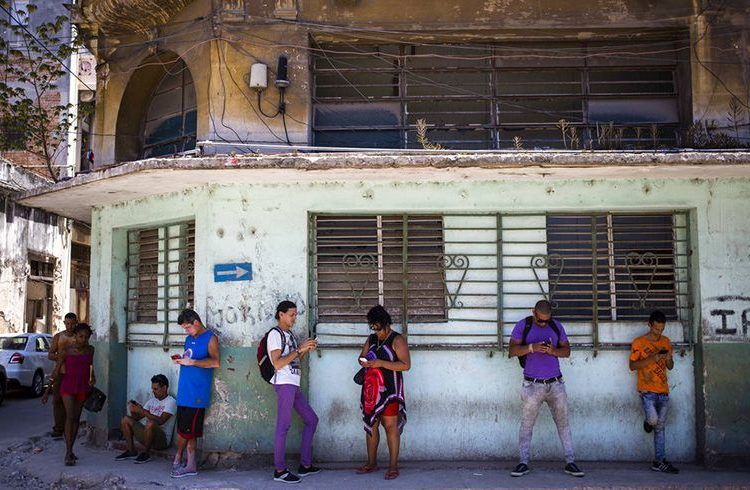 Cubans use their phone to surf the Internet in Havana, on Wednesday, August 22, 2018 in a test conducted by ETECSA. Photo: Desmond Boylan / AP.

Since last Thursday Cubans have been able to access the Internet for the first time through the 3G mobile service put in place by the state telecommunications monopoly in Cuba, ETECSA, which will offer four data packages.

ETECSA executives announced last Tuesday on a Cuban television program that the users of that company must have a terminal or cell phone device that supports 3G technology in order to contract this new long-expected service by Cubans.

As explained by the vice president of ETECSA, Tania Velázquez, the telephone company would send a personalized notice to its customers with the offer of the four packages available to access the service.

The official explained the rate of the new mobile data service that for the 600 MB download package will have a monthly cost of 7 convertible pesos (CUC, equivalent to 7 dollars).

Posted by Cubadebate on Tuesday, December 4, 2018

Velázquez indicated that each of the packages will include an additional bonus of 300 MB for the use of national content and specified that the Nauta mailbag for 50 MB is still in force at a price of 1 CUC (1 dollar) for each hour of connection.

The process of enabling the service was gradual, starting Thursday the 6th with the numbers of the mobile telephony that begin with the digits 52 and 53, the 7th with those that begin with 56 and 57 and those starting with 58 onwards on Saturday the 8th, according to the official.

The Cuban state-owned operator carried out two free tests of the mobile data service in August and September in order to evaluate its capacity and viability before finally launching the service of this communications technology.

But in those tests there were difficulties in the connection and high congestion in the voice and data due to instability in the network’s elements, as recognized by ETECSA.

The president of the company, Mayra Arevich, said that ETECSA has had to prepare itself in the investment area to create the necessary infrastructure and recalled that the expansion of Internet services began in 2013 through the navigation rooms.

By offering a data update, Arevich said that currently Cuba has 670 navigation rooms, more than 2 million Cubans have Wi-Fi accounts, there are 830 Wi-Fi connection spaces, 34,000 state entities have Internet service and more than 60,000 users have it in their homes through the Nauta Hogar program.

Minister of Communications Jorge Luis Perdomo said last Tuesday that the main challenges of the IT and telecommunications sector in Cuba for the future include giving priority to the cell phone network and introducing 4G technology in order to reduce the congestion, allow greater access and lower the service rate.

Cuba: there are only “speculations” about damages to U.S. diplomats’ health

Cuba: there are only "speculations" about damages to U.S. diplomats’ health

The Cuba that I found