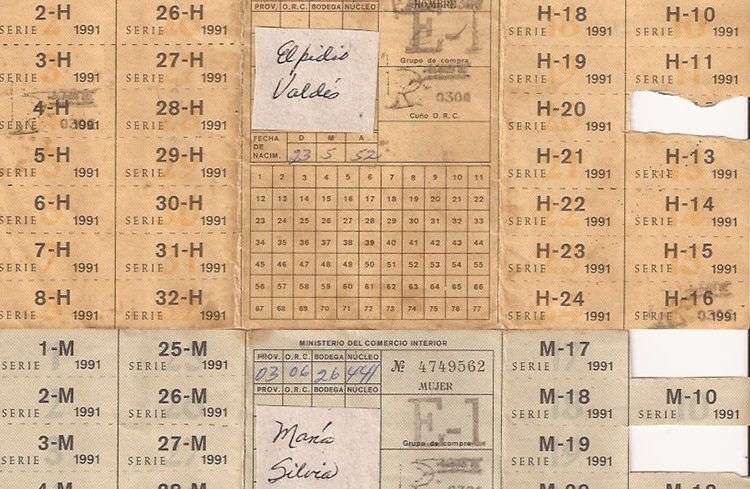 Perhaps she envisaged the wave of self-employment. She did well in a job that can only be understood in the Cuban context during the 70’s and the 80’s.

She was ahead almost by 30 years to our present reality, with the particular characteristic that today most of the people who do that job are men and don’t work in stores but in embassies, registry offices, etc.

Yeyita “la colera” used to stand in line for other people. She was a beautiful mulatto woman, who always wore a wild flower behind her ear and religious necklaces as well as lot of powder around her neck.

With dawn Yeyita would sit in the porch of her house in 17 Street. From there she would say good morning and wave good bye children to school and the older for work. That was her routine as long as there were no new items in the neighborhood stores.

El Carrusel, the layette store, didn’t get too much attention at that time; there were vacuum flasks, little caps and clothes. Only when the store sold specific fabrics for making children’s diapers, or baby carriages and cradles, Yeyita would head to Dolores and 16. The rest of baby items could be easily bought without trouble.

The famous lines during the 70’s and the 80’s in Lawton took place at the store on Dolores and 16. It sold underwear, socks, bed linen, among other products. People could not get two or three items; it was rather “either this or that one”. That was the time of stick deodorants and the “Moscú rojo” perfume.

However, her greatest challenge was the shoe store, located on Concepcion and 16, next to the bakery in the neighborhood. It had showcases on both sides of the store and it exhibited Primor shoes in one and sneakers, sandals and school shoes in the other. I specially recall “Sorbeto” flip-flops which i recently saw in a second hand store in Germany and I had to wonder about its Cuban origin.

The store is selling sneakers! would be the alarm call. Her female neighbors would run to the store, some of them hoping Yeyita was already there. She probably had a special connection with the storekeepers so she would hear it first. I would swear Yeyita was always the first one.

Her role was not just to stand in line for others, she had to sleep there, make the list and take care of the line and call out loud numbers for entering the store. Without thinking about it she became a natural leader accepted by everyone. Her main challenge: to keep the line in order.

The number of reserves depended on the demand of items, so her task was even harder: to calculate the number of potential buyers. Without knowing it, she was also implementing the offer and demand principle.

My mother was her regular customer. They were friends and they helped each other. They dealt whatever each one could do better. I never knew how much a ticket for standing in line was. However, I did found out more than once the traded with the confection of a skirt or a trouser for the fifth or 18th position in the line. My mother used to be a seamstress.

I watched Yeyita’s hair go gray as she struggled with her children and lines. She had three sons and two daughters. She always cared for “my sick daughter”, as she used to refer to one of them. I didn’t meet her because she was in a health institution. She was “blind”, used to say her mother, that strong mulatto woman I recall always with a sheet of paper and a pencil at the porch of the stores saying: enroll in that list.