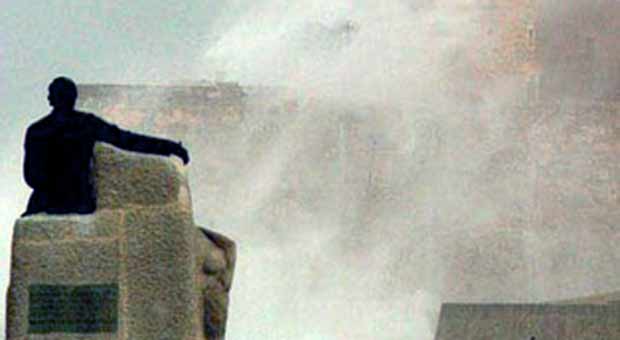 Dick Cluster wanted to turn Havana into a book, and he made his goal to “explore” the city: walking, asking, biking and on buses called “camels”, filled with all the things that had fascinated him when he lived here. The result is “The History of Havana,” a social story of the capital from its foundation until today, written at four hands with Rafael Hernandez, editor of the magazine Temas.

But his true profession is that of translator. His sympathy towards Cuba and passion for the work has taken him to collaborate with Josefina de Diego, Raúl Aguiar, Mirta Yáñez, and more recently, Abel Prieto, Mylene Fernandez, Aida Bahr , Pedro Jesus , among other authors of the Island

Inserting Cuban literature in the United States is no easy task, especially when there translations face certain prejudices, to the point that represent only three percent of all titles. There are also stereotypical views that paint Cuba as a paradise of dancing and partying , or with the nostalgia of the 50s and 60s .

The transition from one language to another involves linguistic and cultural terms, through popular and local uses and puns . For example, ” leaders ” , that does not exactly mean ” executives ” suit and tie , and sometimes it’s more like ” politicians ” . ” It’s about finding what the person would have said if his language was English.” Then Dick teases and makes his audience laugh at the Book Fair. “Let’s see, someone says a bad word ‘ in Cuban ‘ and I will say how I would translate it.”

Speaking of social science research, the task becomes even more complicated. ” How to communicate in terms of prices, that two dozen bananas on Agromercado (green market) can cost the same as the monthly gas bill in the house, and a bottle of oil in thehard currency market infinite times more than a visit to the doctor? ” . Then the challenge is to find ways to specify that, in consultation with the author, without breaking the argument. Otherwise, “a literal translation would mislead readers”

In terms of industry and market, Dick believes that the scope of national literature in the United States has been tempered by a large ignorance, when compared with the music, the visual arts, and film. “For many years almost the only accepted Cuban writers where those of the exile, especially the more politicized.” But that scenario began to change between 1990 and 2000, with the publication of seven anthologies of short stories. It was the narrative of a newly discovered country, and the novelty gets sold.

The trend is that these volumes appear in independent publishing, outside the mainstream or associated with universities, such as Dialogues and Study Center for Latin American in Harvard. Moreover, the large business houses mainly assume Cuban texts that have been best-sellers in Europe.

Dick Cluster continues visiting the country and closely following his literary output. His greatest professional satisfaction is to get to know the authors and to reach people who have no personal experience or have known the island. “It is bringing them virtually here, and try to ‘complicate’ their visions of Cuba.”

David Blanco: The good thing is that Cuba is a fusion