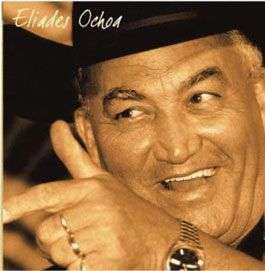 With the trilogy of albums under the name "The most recent of Eliades Ochoa", the prominent Cuban musician presents to the market a sui generis production made at the Enterprise of Recordings and Musical Editions (EGREM) studios.

The CDs are "My guitar sings", "Eliades Ochoa and Jigüe Band" and “A bolero for you ", the latter nominated for a Latin Grammy in 2012 for Best Traditional Tropical Album.

Ochoa, a guitarist and singer, spoke to On Cuba about the importance he gives these productions within his career, in which he shows a series of works he had never before made for any recording.

Out of this three recordings, My guitar sings is devoted entirely to instrumental music, where Ochoa plays different themes as Hey Jude, by the British band The Beatles, The Comparsa, by Ernesto Lecuona, and La Lupe by Juan Almeida, among others, but with very distinctive Cuban sounds.

"A bolero for you" is a rigorous selection of titles written by masters of the genre as Arsenio Rodriguez, Luis Marquetti and himself, born in Songo La Maya, Santiago de Cuba, who is also who wrote the song that gives name to the disc.

The trilogy is completed by "Eliades Ochoa and Jigüe Band", which offers the more standard repertoire the artist, the traditional Cuban genres, such as trova, son and guaracha.

The discs notes were written by Grisell Sande, biographer and wife of one of the creators of the Buena Vista Social Club, and the music production was by Geovanis Alcantara, while Ricardo Monnar made the cover design.

Ochoa, who will not attend the Grammy Awards ceremony in Las Vegas on November 15, has planned a series of concerts in several European places, mainly in Spain and Germany.