A Gift of Cuban Anthropology 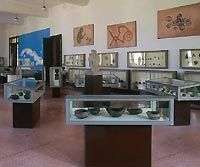 To the historical and architectonic values possessed by the University of Havana in its streets, buildings, squares and staircase add others, considered treasures of the national patrimony, zealously kept in the Montané Museum of Anthropology, located in the Faculty of Mathematics and Computing, in the building bearing the name of Felipe Poey.

Among its most precious original relics is the so-called Idol of Tobacco, found in Gran Tierra, Maisí, easternmost extreme of Cuba, which recalls a habano cigar in its appearance. According to its director, Doctor Armando Rangel Rivero, it is one of the most significant pieces in the museum’s collection.

It is a figure carved in a trunk of the tree named guayacán, of very hard wood, considered one of the best and very much used to make sculptures and the axles of ships’ helixes.

The figure owes its name to its form; however, recent research based on chemical and biochemical analyses show that it is not related with tobacco but with other hallucinogenic substances; it is hollow with a drop hammer on the inside.

It is a pleasure to listen to Doctor Rangel Rivero, an excellent narrator who declares being a fervent lover of anthropology, a science he first came in contact with through his parents when he was still very young. A brief pause leads to surprising revelations.

“The head is seen to be well marked, as well as the features revealing it as a masculine figure, men having the strongest presence in that primitive community. It is very well elaborated, evidenced by the tiara embellishing it that belongs to the taino culture. It has a navel, which means he was a live god, and shows the hands and spinal cord; this evidences that they knew how to count and granted meaning to the numbers. The feet also appear and swollen ankles, denoting the illnesses they suffered from”.

He added that there are diverse theories about the fate of the famous Idol: “It has been said that it was first in possession of a combatant of the war of independence, who had it delivered to the first president of the Republic, Tomás Estrada Palma, who in turn handed it to the University of Havana. Since January 31, 1906 it is part of the collection of this museum, inaugurated three years before with its present name”.

The Director added that as time goes by new research has been made resulting in other information of interest about the piece. “First it was supposed to be an idol devoted to the ceremony or ritual called cohobo, which was when the cohiba or tobacco as such was inhaled. Then it was thought to have been a funeral urn, because some long bones were found next to it; however, that was not the case, since a key element of that culture was the skull, and it did not appear in the surroundings, not even bone remains were found inside the piece. The variable was elaborated that it might have been a cinerary urn, but the research showed the opposite. Other opinions were that it could have been a music instrument, but that was not true, since it did not have forms through which sounds could come out. The idea was not discarded that it could have been a war deity; in that case, however, it would have been a dead god, and this one, as it has been said, was a live one”.

“Almost all Cuban anthropologists and archaeologists from the republican period dedicated articles to it; this was also the case in the last 20-30 years, but other interpretations were made after hallucinogenic substances appeared on the inside”.

The museum, aimed at university teaching, bears the name of Luis Montané Dardé, an eminent Cuban investigator, founder of a scientific practice in this field in the late 19th/early 20th centuries. It also conserves and exhibits an ample sample of conch and stone adornments, petal-form axes and other objects of the material culture of those first inhabitants, all of them jewels of Cuban anthropology.

The institution conserves exceptional, unique archaeological pieces of Cuba’s remote pre-historic past. It has the largest and widest collection of deformed skulls of the aborigines of the archipelago – an anomalous custom of the araguaca ethnic group, which inhabited the country until Columbus’ arrival.

Totó La Momposina Presents Cuba with the Magic of her Drums

Totó La Momposina Presents Cuba with the Magic of her Drums