The Greatness of a Family… the López-Nussa 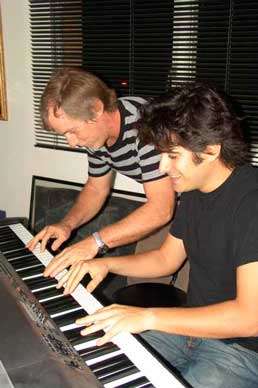 Cuba is a musical island… Throughout our history there have been numberless representatives of this art genre that have become milestones of universal culture. Among them were families who dedicated their lives completely to this art, passing it from one generation to the next. Caturla, Vitier, Romeu, López Gavilán are only a few names of families whose art has manifested itself in different music genres.

I always joke with a friend asking her if the López-Nussa have white and red blood cells running through their veins like all other mortals or just music notes on a live stave instead of a body.

Wanda Lekszycki and Leonell López-Nussa were conscious of this when they instilled the love for music in their two sons Ruy and Ernán. The latter directs his own jazz trio, with albums like From Havana to Río and Pas de Trois. He is also a successful musical producer who has worked with Cuban artists like Miriam Ramos, his brother Ruy and his nephew Harold, in addition to having been appointed United Nations Good Will Ambassador.

Ruy is one of the drum “monsters” in our country. Master of masters, this artist dedicates part of his time to teach. He also conducts his own project, called La Academia (The Academy), which serves him to explore new forms of popular music, mixing jazz with Yoruba traditions and Cuban rhythms like son, cha-cha-cha, mambo, etc.

But that is not all. Music also “contaminated” Ruy’s offspring: Harold and Ruy Adrián, two young persons who have been evidencing their technical and creative gifts already for several years. Harold followed his uncle Ernán’s steps at the piano. Only 27 years old, Harold has already recorded four studio albums (Sobre el Atelier, Canciones, Herencia and El país de las maravillas) and obtained international awards like the First Prize at the 39 Montreux Jazz Festival, Switzerland, and the 2011 Jazz Talent Prize granted by French ADAMI. He leads his own trio, where he shares roles with his brother Ruy Adrián and double bass player Felipe Cabrera.

One cannot but highly praise this virtuoso quartet. Their technique is astonishing, with a very wide range of expressions of popular music and jazz, and such an easy interpretation that it would seem impossible and true authenticity in their work, both the veterans (Ruy and Ernán) and the young ones (Harold and Ruy Adrián).

Another demonstration of their virtuosity was their most recent performance at the Covarrubias hall of Teatro Nacional de Cuba – a concert dedicated to their parents and grandparents (Wanda and Leonell), who taught them their love for music – where unfortunately Ernán could not participate for health reasons.

A special guest at the concert was Kelvis Ochoa, who transmitted his feelings to the entire audience with the theme Ojos Negros and ended with a salsa-conga that made everyone dance at the Covarrubias Hall.

The Laundresses of Turquino River

Strike-out to a Golden Opportunity

Strike-out to a Golden Opportunity