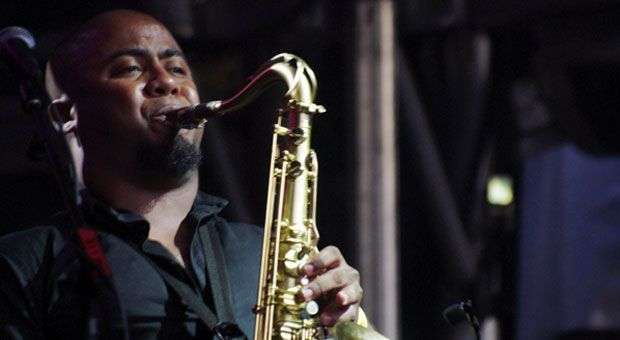 Do not hesitate if Louis Armstrong, Duke Ellington, Wynton Marsalis or Emiliano Salvador suddenly “appear” to you on a disk. The saxophonist Carlos Miyares “blends” the styles of these men with his own and offer to us in ¨Chucho Valdes presents Carlos Miyares¨ (Bis Music 2011), a phonogram produced by both musicians.

There are eight singles that lead us to a way of making jazz that seduces and invites you to taste it due to its interpretive force. Thus, Miyares (Santiago de Cuba, 1980) is accompanied, in his first album, by pianist Tony Rodriguez, bassist Lazaro “el fino” Rivero Alarcón, drummer Oliver Valdés and percussionist Yaroldy Abreu (congas), for giving us an exciting journey through the music, through the way he feels melody, as he is the author of seven of the themes included in this work.

On this album Carlos does not hide his admiration for great international jazz players, and that is actually perceived in this work. The influence of the way this genre born in North America comes to us in exponents as Miles Davis, Dizzy Gillespie, Charlie Parker and the Lincoln Center Jazz Orchestra of New York.

Those who listen to the CD will feel the necessary presence of important figures of Cuban music like singers Benny Moré, Compay Segundo, Ibrahim Ferrer and Omara Portuondo , pianists Bebo Valdés, Ruben Gonzalez, Frank Emilio Flynn and Gonzalo Rubalcaba, drummer Tata Guines, and the rumba of Muñequitos of Matanzas and the old trova from Santiago.

All this is present on the album. We can enjoy compositions with a special lyricism that indicate popular streets of Havana as in the case of ¨5th and 32nd¨ and ¨Calzada and D¨. ¨Friends-cha¨, ¨3:15 p.m.¨, and ¨The star are your eyes¨, the latter belonging to Archie Shepp, are also remarkable hits.

For the musical researcher Leonardo Acosta, the volume of this outstanding instrumentalist -member of Chucho Valdés and the Afro-Cuban Messengers-, is an absolute reverence to that musical Havana , “where it is possible and even more, even essential, for jazz, rumba and, of course, that Cuban invention which is the Afrocuban Jazz to coexist “.

Carlos Miyares, graduated as saxophonist from the Esteban Salas Conservatory in Santiago in 1999, has integrated bands that play different styles of Cuban contemporary music as ¨Juego de manos¨, ¨Interactivo¨, ¨Carlos Varela and his group¨, and ¨Bobby Carcasses and Afrojazz.¨

Undoubtedly, ¨Chucho Valdés presenta a Carlos Miyares¨-phonogram that was presented last March 14th, in the theater of the National Museum of Fine Arts -, is an essential album that walks through the paths of a genre that has very talented exponents in Cuba.

Leo Brower: It is the work what gives the light

Tomás Sánchez “Culture is the soul of a country”