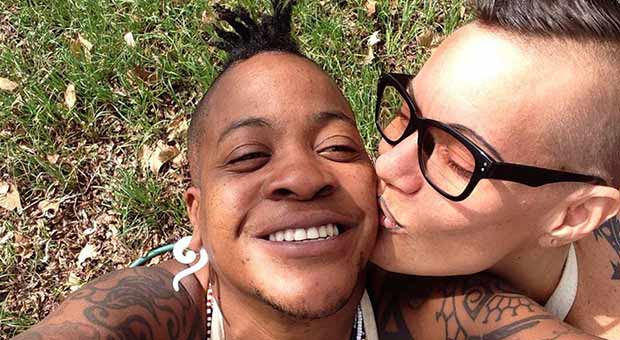 Wanda (Odalys Cuesta), PasaKruda (Odaymara Cuesta ) and Pelusa (Olivia Prendes) have a long history in the development of cultural anti-establishment projects, which includes the creation along with Llane Alexis Domínguez of the first queer and vegan art group in Cuban in 1996. Then, in 1999, Krudas Cubensi was born.

Krudas broke every traditional ways of making rap music and mostly men supremacy in the Cuban stages. According to Ariel Fernandez Díaz: Krudas arrived to tell us that our speech is missing something, that there are certain ingredients missing and that they have whatwe lack and that they are going to stand by us in that battlebut we have to listen to them. I believe this work is important because Krudas succeed in raising awareness on topics we don’t want to discuss or we feel awkward when we have to talk about them. Krudas, with its constant presence through their songs, their performances, their activism, are making us take a look at social spheres where we don’t have any knowledge about or we don’t have the will to look at. [1]

In that first stage Krudas focused on Afro Cuban elements, expressed in their appearance, women with dreadlocks and clothes that remind us of the African continent, but mainly in their lyrics. At that moment they also had strong creative bonds with intellectuals like Alfredo Hernández a.ka. “Punta de Laza”[2], and Pablo Herrera[3].

These Cuban women add rhythm and flow to their thoughts so in their songs, along with the strong desire of making people dance and enjoy themselves, they tell their experiences as women who “love papayas”, physical freedom and freedom of ideas and love:

Unearthly, true love, colossal, Sunday love,/ let’s play until sunrise, look, I take a bus,/ I touch your hair,/ I envelop you in gleam and I burst,/ I increase your doses/ you’ve got me, I turn you on, I teach you, I feel you,/ the warm orifice, the bittersweet taste/ and the blue sky, with infinite shine, slightly and tremendously trembling,/ I then I tell you I love you and you answer: I love it![4]

In the order of associations Krudas generate in me there is my evocation of Maria Teresa Vera, an outstanding representative of the best exponents of traditional trova music. This renowned lesbian mulatta is the perfect example of a composer that avoided the inclusion in her work of phrases and lines that could have put the generic, racial and lesbian tag that should make her stand out from the rest and identify her. [5]

Krudas make actual revolutionary and progressive rap to the extent that they had to migrate: the “musical island” was too small for their interests and passions.

People use to call us crazy because we always question our supposed role,/ Because united and firm we still stand as rocks,/ because we call ourselves beautiful with these fatty skins,/ because we don’t eat meat and we don’t use gold nor coke.[6]

You just can’t be extremely wrong in a society that only preconceives order and categorization as valid. And even within a movement that despite being antiestablishment is chauvinistic, sexist and in some cases misogynous. Just as PasaKruda states about Cuban hip hop: “Chauvinistic But We Always Have a Stand”.

The truth is that for years, before they left the country, they were marginalized by the ruling cannon among us, and, consequently, they never seen from a different patriarchal logics to understand the art and the language they have always bet on. In the Cuban hip hop culture itself, contradictorily with the fact of being a movement that fights for the elimination of social inequalities and discrimination, women rappers had to face marginalization due to their secondary position in the social structure. [7]

As researcher Tanya Saunders: Krudas policy is a linguistic and ideological intervention within hegemonic speeches on race, gender and sexuality; it also deals with the issue of oppression through a review of individual experiences they relate with systematic means of oppression. Their work focuses on changing the mind of fellow citizens as a way to promote social change at the roots. [8]

Krudas, as Cuban women, simplybreak up with possible patterns, also when referring to leaving the homeland and living in the diaspora:

The prize for my people in and out,/ Cuba is the island but also the diaspora./

Moreover, the entry in other countries also makes them question the conditions of immigrants, as well of stereotypes on migration:

With several years of artistic career outside of Cuba, seven years already, they have performed in spaces that show the diversity of the contemporary society. According to Pelusa:

We’ve got hip hop, feminist and queer communities. The world of activists for social, anarchist improvements.We have people on theory, we have the academy< and more importantly, we have the people, simple people that also enjoys our art. [11]

Rhythmically, the bits supporting Krudas’ lyrics are characterized at present by Latin American genres like cumbia, just to mention one. Tours through the US and Mexico for instance, have left their mark in their current lyrics. Their track “CumbiaparaOshun”, included in the album Levantate, produced in Austin, in the US, in 2012, is an example.

However, whenever they return to Cuba they find a stage that acknowledges them as one of the best exponents of Cuban rap, which implies, besides their lyrics, improvisation and their work as activists with the purpose of giving meaning and reorienting the incipient movement of Cuban rapper women. As said by Cuban historian and activist, LogbonaOlukonee:

As queer, feminist, afro-descendant, Caribbean women who champion the rights of Pacha Mama, and raw and vegan food, Pasita and Pelusa are changing the image of Cuban heteropatriarchalhip hop, not just with their presence but also with the spiritual and training support of the rest of Cuban rapper women and activists around them. [12]

Furthermore, they continue approaching subjects like afro-origins. They also sing to their mothers, a topic that not for being frequent within hip hop, loses relevance for this group:

Thanks for giving me a hand/ thanks for sewing so much to buy me the piano/ thanks for inculcate me all this Cuban pride/ thanks mum for loving this profane being./ Thanks for your efforts and the light mi dear/ though I’m far away I sing by your ear,/ though there is a lump in my throat/ when I think of you I become a giant. [13]

The presence of music groups as KrudasCubensi has legitimized an “alternative” artistic Cuban scenario [14], which implicitly conveys the values they champion:

Love. Justice in this world.Nature, Balance.Respect. Horizontality=Circularity.
Art as a way of living that gives us power and improves our existance. Change, migration.
The attention of the body as temple= Vegetarianismx+ Krudismx.
Care for the planet, its resources and the species that live in it.
Joy. Autonomy.Afro-Cuba.The celebration of our bodies.Self-esteem.[16]

[14] I make discrete use of the word “alternative” in order to boost comprehension, but I’m not actually a supporter of its indiscriminate use because it legitimizes that there is a center, a paradigm, when in fact there are several, some hegemonic and some shared by the majority.

Clearing the way from obstacles in favor of new scenarios