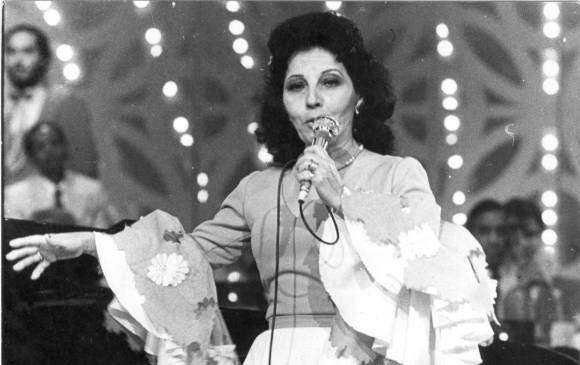 This morning the top floor of the Calzada and K funeral parlor seemed too empty to the importance of the deceased: when I learnt that they will hold a vigil for Celina González in the hall reserved to important dead, I assumed there would be no room for a soul, between intimate mourners, artists, reporters and fans of the Queen of Punto Cubano …

But it was not like that, or at least at the time I was there, just were three journalists, and about thirty people, including relatives and friends. I assumed that their brothers in faith had already met the funeral rituals of their religion, or maybe then more people came. In his chapel, a picture of Celina and Reutilio Domínguez crowned the imposing coffin, between respective floral crowns sent by Fidel and Raul Castro.

I spoke with Barbaro Reutilio Dominguez Gonzalez, son of one of the most popular couples in Cuba arts, and he shared with OnCuba some considerations about his famous mother, whose death last February 4, at 85 years of age, shocked those of us that knew her music and enjoyed her singing.

“It is an irreparable pain, but we were expecting it for a while. In late August doctors predicted she had days to live, but mom fought until last Wednesday. She died at 10: 25 am. I repeat, we were expecting it, but it’s hard to deal with it, “he confessed.

Asked how her last days were, Barbaro said his mother died peacefully. “Mommy left in peace. I think she was a happy woman, did and achieved what she always wanted. she lived to the fullest, “he said.

Regarding the legacy of the author of hymns like A Santa Barbara and Yo Soy El Punto Cubano, his son said Celina traveled extensively, and took the Cuban music to the most incredible places, and was praised by unsuspected public, such as Japanese. “I asked Mommy how it was that the Japanese understood and danced with her montunos, and she laughed and told me, ‘Well, I do not know … but they dance!” he says.

According to Barbaro Reutilio if the Guajira is known in the world is thanks to his mother, who defended with her talent, her voice and charisma a genre in its marginalized in his opinion, sometimes overlooked despite summarizing the quintessence of roots and spirituality of Cubans. “Mommy dominated country music with ease, defended it and took it around the world. She had Cuba in her heart, “he said.

US -Cuba police cooperation: to catch the "bugs"

Inside the skin: "My country is a culture to which I belong in fullness"