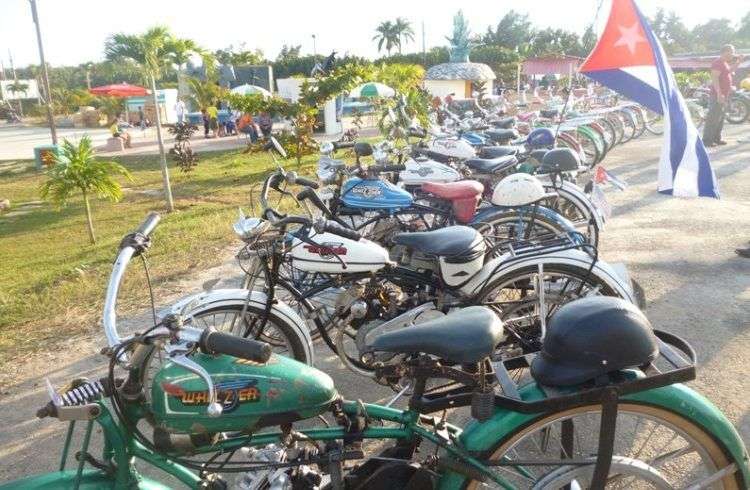 More than seven decades after its inception, Whizzer rides Cuban streets. It is not a famous person, but a moped, powered by the American company Breene-Taylor Engineering Corporation in the first half of last century and widely used in the period of the Second World War and after this.

Arguably, the brand was the first to employ auxiliary engines for bicycles, mopeds because while the first begin to appear after the conflagration, this achieved great success during the wartime period. Various sources report that they could travel nearly 200 km with one liter of petrol.

Today, on board these old pieces, members of the Whizzer Club arouse the curiosity of those who see them go by.

For Elvis Perez Hernandez, a member of the club and founder of one subsidiary in the province of Artemisa, the essence of the group is in the rescue and conservation of these engines and restore utility to not only be able to use them as transportation, but also provide or enrich the culture of the population regarding the Whizzer. On their qualities, Elvis expands:

“They are very affordable and adaptable. They spend little gasoline and break infrequently. I understand that here, many years ago, they were very cheap and were used in the post office and as a patrol “.

Others share the same fascination with Elvis before the Whizzer motorbikes: “The national club, which belongs to the Union of Clubs Antique Cars and Motorcycles of Cuba, was opened in 2010 and came to my town -San Antonio de los Baños with the desire to extend it to my territory. So I was adding some interested people who have purchased bikes already damaged by the passage of time and transformed them.

“So far we are 10, although four drivers still have not finished repairing their vehicles. We want to grow more. For now, to achieve that goal, we have as a method to motivate anyone we see with one of this motorbikes to join the club “.

Perez said his small group has been represented in numerous exhibitions, including the parade in the capital, in 2011 that paid homage to the famous Argentine motorist, Juan Manuel Fangio; and the first Patio del Automovilismo, an event that reminded to Havana times in circulating as lords of asphalt cars like the Ford Model A 1930 Ford alongside classic brands of motorcycles and bicycles.

He also starred in a parade as part of the opening of the XVIII Biennial of Humor of San Antonio de los Baños and an exhibition, also in this municipality, in which apart from making maneuvers and demonstrate skills, presented a collection of Niágara bicycles, pieces who will join the club in the future.

“We woke everyone’s attention. People are not content with looking at pictures taken with the bikes, they interact with us, “this man who professes his love for Whizzer adds with pride accompanying with a tattoo on his arm where large characters, have been recorded each one of the component letters of nomination.

“Before I did not like motorcycles, I preferred bicycles, but now I have the certainty that I would never separate from my Whizzer and will never sell it.”

US -Cuba police cooperation: to catch the "bugs"