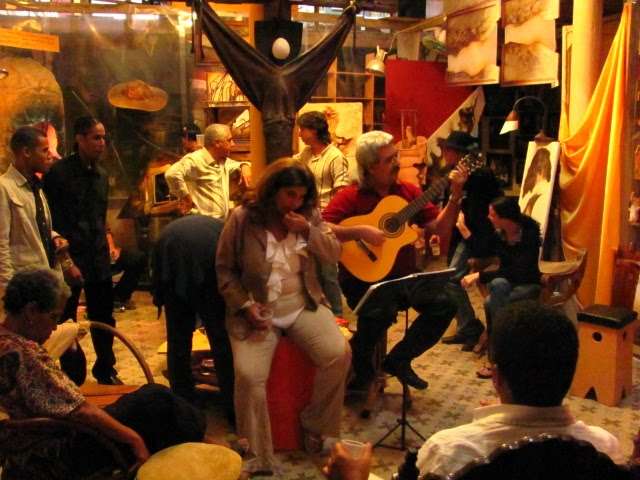 Dozens of visitors daily cross the threshold of the The eye of the Hurricane (El ojo de la ciclón) Studio Gallery, in the corner of O’Reilly and Villegas, in Old Havana. Many leave without knowing that there, the molds that were used to melt the statue of Ernesto Guevara crowning the Revolution Square in the city of Santa Clara, in the central province of Villa Clara, were built. The reason is that in the same place where there was a hardware store, the famous sculptor José Delarra (Havana 1938-2003) built his workshop in the 1960a and created to some of the most emblematic pieces of the last decades in Cuba.

Inherited by his son, the painter and sculptor Leo D’Lazarus, the Gallery Studio then became a place of culture. Along with photos, collages and functional sculptures, you can find a gym, a small library, a room for meditation, and a classroom for tango lessons. The multipurpose concept meets the creative needs of the artist, whose primary means of expression is translating the movement around him, says Saul, who works in the gallery space and a friend of D´Lázaro.

Quite a few foreign visitors enter The eye of the Hurricane interested in buying through Internet, larger works of the sculptor. Although Saul and collaborating artist have managed to position the image on the net through a newsletter and a website, buying pieces online is difficult. "DHL is the only company through which the sculptures can be sent abroad. But they don’t insure the works, and using that alternative is a risk, “regrets Saul, who is standing next to a piece more than two meters tall, similar to that for years adorned Havana’s The Coubre train station.

The process of buying smaller pieces is less complex. The Export Offices of the Cuban Cultural Fund certify their acquisitions and the ability to take them out of the country through Customs. In these establishments the process is mediated by the theme or concept in the work, but mostly for the curriculum of its author.

Central Obispo Street is swarming with small galleries, mostly private businesses that grow out of family porches, or even household rooms, where they sell paintings of different techniques, or photographs. Minor works, recognized as crafts, escape the art trade regulations. Among this variety, are common imitations of the cubist style of Pablo Picasso, or the typical colors and strokes of Cuban Amelia Pelaez. Although these dealers and artists for years have placed their bets on exotic mulatas selling fruits, farmers with faces lined by time and sun, cigar heavy smokers, and almendrones (old American cars).

Owners of such outlets don’t usually speak on their success or failures. Some authors say they are self-taught, and most said that sales are slow.
The situation doesn’t vary greatly from one tourist destination to another. Leo and Leinier pioneered the commercialization of art in the La Estrella town, a sui generis mall located in Cayo Santa Maria, north of Villa Clara. On their table they offer tiny sculptures with high level of processing along bamboo vases decorated with typical Cuban landscapes. Although Leo, a graduate of Fine Arts in 2005 at the Arts Higher Institute, clarifies that space is contracted exclusively to trade art.

In the small business that trade this kind  of works the boundaries between art and craft are blurred, because prices and styles are ruled by arbitrary foreign demand. The reality is that many young artists, graduates of Cuban painting academies, take this formula as the first line of income, torn between originality and market demands.

The World of the Dance Glances at Havana: Pre-Festival Strokes:

The World of the Dance Glances at Havana: Pre-Festival Strokes: