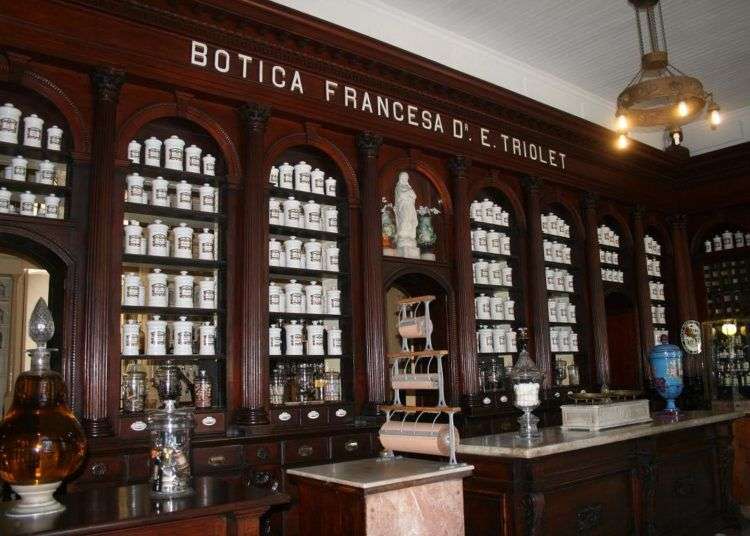 In the French pharmacy on Milanés Street, facing the Parque de la Libertad of the city of Matanzas, time has stopped. When you trespass its doors you find the entire furniture bought by the owners around 1882 to open the commercial establishment in the center of a city in full economic splendor.

If you force your imagination a little, you may meet its founder, Ernesto Triolet, or his wife Dolores, walking from one end to the other of the only French pharmacy conserved in the world, preparing medicines, serving the clients, controlling the temperature of the furnaces in the laboratory set up in the courtyard, or wrapping up the orders.

At this place, turned into Pharmaceutical Museum in 1964, art and medicine shake hands harmoniously, since it conserves a large collection of French porcelain containers, many of which were hand-decorated at the request of doctor Triolet himself. The entire set of instruments in ceramics, glass or opal used more than one-hundred years ago by the owners of the place also exists in perfect state of conservation.

The Triolet couple, particularly doctor Ernesto, used medicinal plants as main source for his medicine, which enjoyed excellent reputation among the country’s clientele and abroad.

In the different halls one may see the flasks containing the different compositions prepared in the pharmacy, many of which still have part of their contents and aroma, samples of an age of expansion and development of Cuban pharmacy. On the labels one may read the contents of the recipients: hop, belladonna root, triaca magua, aconite leaves, yellow lacquer, copal or star-shaped anise, among others.

Also conserved are the grinders, mortars, stills, weights, the brick furnace, the recipients to keep the syrups and other preparations, all with the indisputable seal of the Triolet house, because although many of them were imported, others were home-made.

Also safely kept from the passing of time are the cash register, the telephone, the entire wooden construction of the pharmacy, the cuspidors in turtle form.
The Museum was submitted to a capital restoration in 2003. Since it reopened its doors it offers guided tours and receives scholars on pharmacy as center of scientific information.

A visit to the studio of the artist Martha Jimenez