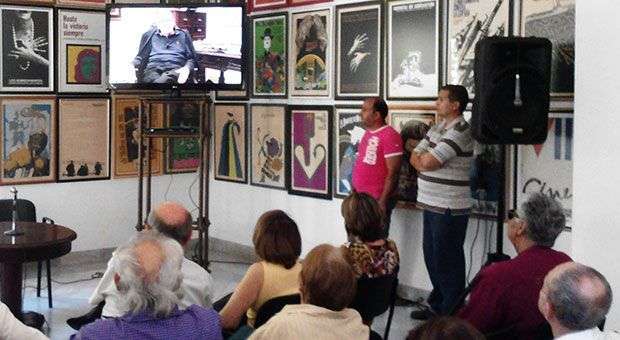 If anyone doubted it, there is documentary evidence that Alfredo Guevara died convinced of ICAIC’s obsolescence. He said it, weeks before he died, and did it with the moral authority that gave the founding of the institution whose reform they demand today vehemently and although may be uncomfortable , many good people of Cuban cinema.

Above the right and wrong, Guevara revealed his position in an interview filmed by Xavier D’ Arthuys and Ariel Felipe Wood last year. The editor Miriam Talavera took several fragments and put them together a audiovisual exhibited on Monday in the Festival House, where they presented the book “Homage to Alfredo Guevara “.

The text included the transcription of these fragments, which are breathtaking just a week after a heated discussion in the Congress of the Union of Writers and Artists of Cuba (UNEAC) with regard to a long longed Film Law. Proponents of the legislation considered it urgent, while the government estimated that the country has other legislative priorities.

Anyway, Guevara argues that technological revolution, especially the digital revolution resolved wonderful many of the most complex film production problems, and requires a new structure, a new design of the role of the state in the direction of film work, understanding it not as a direct command, but as helping to “contribute to the movies being makeable.”

The strength and relevance of such criteria almost stole the show at the launch of the book itself , and the announcement of this year’s Festival of New Latin American Cinema would be dedicated to one of its founders , the recently deceased Colombian writer Gabriel García Márquez.

Before making this news public, Ivan Giroud , President of the Festival , reported it to the widow of Gabo, Mercedes Barcha , and his sons Rodrigo and Gonzalo. The initiative was met with a standing ovation in the crowded Yelin room at the Festival House, where old friends of Guevara gathered to remember his imprint.

Some arrived with the skepticism that these characters that everyone speaks well, unbearably immaculate, generate but thankfully the book was more interested in the human being than his legend, and his reading leaves a candid portrait and unsweetened from the testimony of personalities that were very close to Alfredo, as Eusebio Leal, Manolo Pérez Paredes and Ignacio Ramonet.

Undoubtedly an interesting edition, the result of collective evocation made one morning last December in the Glauber Rocha room of the Foundation of New Latin American Cinema, to remind the man of the everlasting jacket over his shoulders, still from Beyond strives in leading, as only he knew and could do

New space for jazz at the Sevilla Hotel