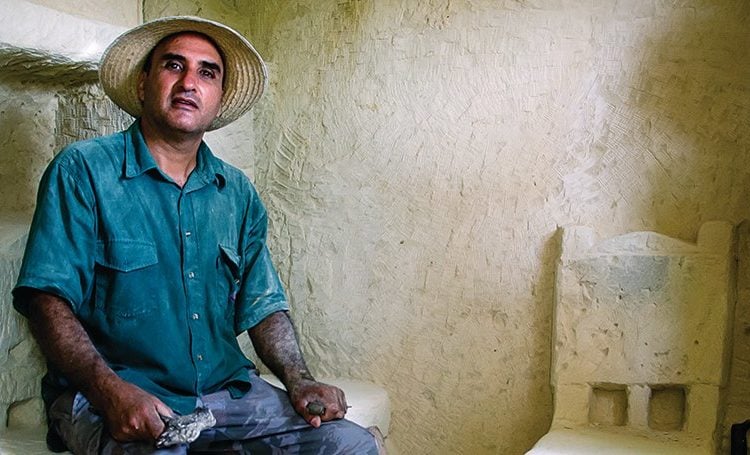 In what used to be called Yateras, now the city of Manuel Tames, in Guantánamo province, a zoo filled with stone animals sits atop a hill. A strip of land still full of dense brush, despite its concrete paths, is home to these beasts. And if one looks closely, they even seem to shake their limestone-and-moss loins, darkened by the humidity of countless rainstorms and dewy mornings, emerging from green vines and fantasies.
Ángel Íñigo Pérez is a man from the countryside and a self-taught sculptor. His father was the famous Ángel Íñigo Blanco, also self-taught, who created this fantastic panorama. The stone zoo, the only one of its kind in the world, was created on Dec. 21, 1977, on a farm, the Finca San Lorenzo.
From a very young age, I would see my dad carving those huge rocks that had slid down from the mountains thousands of years ago, and that had a big influence on me. You have to have a real vocation for sculpture! It is an art that requires a lot of work; you need determination and a lot of talent to continue. A rock is just a rock when you first look at it, but you have to see what it has inside, what forms it can take.

This Ángel is a chivalrous man with the strength of a giant. He speaks calmly, as if his daily battle with stone hasn’t hardened him. For 15 years, he worked as his father’s assistant. As evidence of this, 120 of the stone zoo’s 426 animals were sculpted by him.
My first piece was a little donkey that is over there, on the hill. My dad asked me to make it. Previously, when I was 10 years old, I made some small sculptures at home, but when I was 20 I began my job at the zoo.
You gradually find your own line, your own style, which is why my sculptures are now depicting the world of farmers. The zoo’s surroundings are what suggested the farmer theme to me. Each piece takes a while, depending on volume and complexity. For the last two years, I’ve been creating a life-size bohío (palm-thatch hut). The rocks I use are limestone, which are right there on the farm; I don’t move them anywhere.

The bohio is enormous, like an ancestral rock. When you see his tools (a chisel, small mallet, pick, and machete) you can understood the magnitude of the job. On the outside, it looks like a typical rural bohío; his titantic task now is to recreate the interior with several rooms.
I have three children. One son, who’s 19, has artistic leanings, and studied at the Visual Arts Academy; another, 14, is studying the trumpet; and my 7-year-old girl says she’s going to be a doctor. Maybe the continuation of my work is guaranteed.

I ask him to pose for me inside the bohío. He’s almost finished the living room. The sculpture of a woman stands at the window and a farmer drinks coffee, standing up. Ángel sits down on one of the two stone taburetes (rustic chairs); his father is surely sitting in the other.