You Have to Live Life, No One Can Tell You About It. Leslie Sardinias 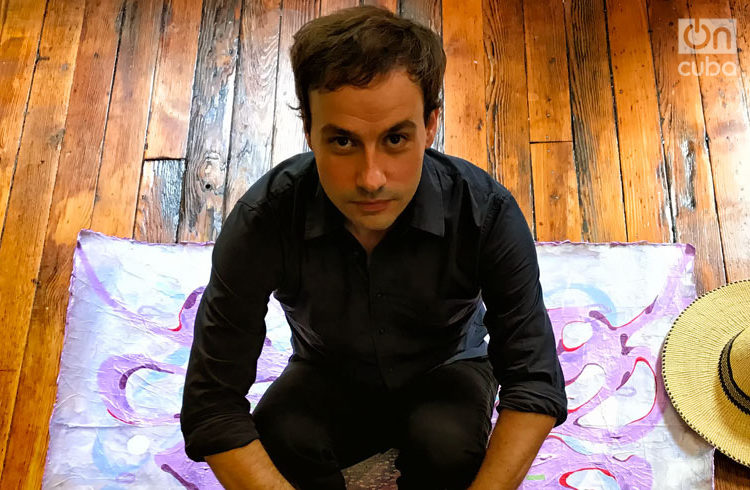 Leslie Sardinias was born in Cuba, but he has developed his work fundamentally outside the island, first in Spain, where he lived for several years, and now in New York. Once you approach his work for the first time you see a poetic visualization and a well-argued discourse behind each one of his perspectives.

I have revised with attention your most recent project (Cocoon), which connects you to your roots through nature. Why? What is the link? The plants and the process of creation, how are they related?

I believe any connection with the first memories begins by discovering where you belong and to (re)discover who you are you have to get to the root, to a genuine root without traces of humanity and, therefore, without what is toxic about customs, politics and ways of living, with which, in my case, I who have lived outside of my place of origin – Cuba -, and after I returned many years later, I felt out of focus with that reality and the way I found, without chauvinisms and errant politics, was to seek the nature that formed us, so I based my work in the expedition of Alexander von Humboldt to Cuba in 1800 and in the drawings made by Anne Bonpland about herbs (since it was the first mayor expedition to the island about flora and fauna) in order to recreate in that way the map I had forgotten. The herbs, the plants, the flora or fauna that accompany that series is the pretext to form a new world recreated with pieces of memories I found and others to be created. The connection with the herbs is, in short, the element that I use to exemplify my presence in a place.

You make of the environment a discourse in itself, or was it chance that has chosen your studio in NY for this happening? If it were so, if we are before a consciously chosen space, how does it incorporate into the dialogue that your work proposes?

The space was chosen after having several exhibition options, it was not by chance. I had an exhibition programmed for May in NY, but what was not programmed was creating a prelude of the project for Havana in December of this year. A year before, while I was designing the NY project, I realized that my Havana expo Origin (based on the expedition of Von Humboldt and Ramón de la Sagra) with the Núñez Jiménez Foundation had to start in my own studio, based on something very intimate and internal. I have worked for more than seven years in that NY studio in Manhattan’s West Village. So I dismantled the entire studio and transformed it into a window case of curiosities, I transformed myself into Noah and his ark or into Humboldt, but compiling my life in the Big Apple (a place that the Prussian explorer never went to). That’s how Cocoon was born. My studio is my chapel where I hide, shelter and develop this exhibition that will continue in Havana, that was my way of showing my real life, the place where I cultivate my work. It is also by chance that I closed this studio to open another chapter in my life that will take me to new horizons, therefore chance, circumstances made me close a cycle of life to give way to another and: what better than my own lab to show the road that will come? The dialogue between the space, my studio and work was easy, simple; they knew themselves perfectly well: the work and the walls. I transformed everything into a tropical place, into a great mural full of color in which every element interacts naturally with what it has in front or on the side, there is no divorce, everything flows.

That road you are proposing in your work undoubtedly reveals an aspect that insists on an inner trip of self-discovery. A bit, they seem to me, the classic questions of: where I’m going, from where I come. How do you connect these questions with the spaces in which you live and have lived, with your work and with what Cuba, Spain and New York have meant for you?

An artist, a painter in this case, lives off of what he sees, not off of what he paints. It is essential to travel, know, explore, submerge yourself in the world, to devour and reproduce it. You have to live life, no one can tell you about it. In the case of the Cuban people the diaspora is subject to a sociopolitical and economic theme, in my case I have never felt like an émigré, I’ve never felt that I was lost or that I couldn’t live without the island. Madrid is my second home (because the first is still to come, I suppose this will be where I form a family, a home, I’ve always been a bit of a nomad). Spain is part of my roots, it’s walking barefoot through the salon of one’s home, knowing you won’t step on something that will hurt you, it is the land of my ancestors and it gave me a home for many years, but NY opened my eyes, it made me wake up. It made me strong, knowing what I don’t want and especially that “everything” is possible, I owe  my return to Cuba to NY, I owe it having shown me a way of returning and having helped me find a world that I had left behind (Havana) and the incomparable feeling of being from a place. When I look at my work it has a lot of the sea, a lot of the concept of the trips and of the sea as a natural route of rapprochement between cultures. Thus the wealth of my colors and textures, thus the different layers in the work that give the sensation of levels of composition, perhaps despite everything I always felt like an islander, I suppose that someday I will touch terra firma. But today what interests me is to inquire and see how through different materials my work is enhanced based on (and through) experience. I’m not interested if my work is more contemplative than conceptual, there’s a great deal of mental craftwork in the conceptualism and, in the end, I am an artisan that does art. Therefore I never asked myself where I am and much less where I’m going, what I’m interested in is what I am doing now. The rest are interpretations.

How have you been able to insert yourself in such a competitive space for Art like the city of NY? Do you believe your work is connected with an evolution of the island’s visual arts? In what way? With which Cuban artists or cultural tendencies do you believe you have a connection?

NY is very competitive, it’s true, but I have always believed that the competition is with oneself, not with another and much less with the rest. A 100-meter distance runner in the Olympics is focused on his goal, he’s not looking at how the one beside him runs, I do the same, the time between two persons is very relative, we don’t all reach the same experiences at the same time; everything is circumstantial, it’s also true that luck frequently is on your side or against you, but since everything in life, being resilient to an obstacle is what allows you to better train your being, in my case NY has been and is an exceptional experience. I made my debut making a project for Time Square in 2012 where I turned off at 9 pm the square’s publicity screens to show an animation short I had created under the name of “Watching You,” from then on other projects came that have started being linked to others outside NY. The rhythm is exhausting, and it creates vertigo, but after you get used to it you realize that NYC is a unique place.

I wouldn’t know how to tell you how my work can be or is connected with Cuba’s visual arts, I suppose it is connected since it reflects an accessible and recognizable discourse in its expression, and I really like the movement of the Cuban concrete artists, especially Sandú Darié or the minimalist work of the 1960s of Carmen Herrera, or Flavio Garciandía.

I detest that business of Cuban art and Cuban artistic panorama, what exists is Art, the rest are boxes to sell a product an easier way. My project is going to Cuba, it is going to Havana in December, the exhibition will be in the Núñez Jiménez Foundation of man and nature, and will be called Origen. I am anxious to reinterpret the Foundation’s space and turn it into a great installation, where the workers and visitors dialogue with the work with no friction, where the foundation’s staff, from its director Liliana Núñez to the student, become part of my work, and I bet that they, in their daily routine while walking among the works that I will create, will merge until they become part of a performance that turns them into pure art.

I expect nothing from my work on the island, I belong to Cuba, my work, my art, myself; we are all a whole. If I were to expect something, it is that I feel that I am not from there, that my art needs to become part of something because it is isolated. I don’t feel isolated, I don’t feel out of context, there’s also the fact that the specialists don’t understand or think that my work doesn’t reflect something that they themselves call Cuban art, but this, in any case, is not my problem, it’s theirs – if the problem exists.

Not everything in art is about daily life and much less about political routine. There are many roads to art and mine perhaps reinforces, more than in other cases, what we are, but, I believe, in a much more poetic and symbolic way. I do not aim, I am not interested, to be obvious or use the intertextuality in the construction of my creative discourse, I’m much more interested in the symbology or the power of a composition that evokes some feeling in whoever sees my work

How to help Cuba after Irma

U.S. and Cuba hold talks in Washington about “acoustic attack”