Generating a business environment that facilitates entrepreneurship is the task of governments and possibly one of the most important.

A phrase at the Mesa Redonda TV program on Thursday, January 9 has motivated this article: “We don’t need enterprise directors, we need businesspeople.” I wondered immediately. So all those thousands or millions of hours and resources dedicated in all these years [1] to the training of enterprise directors, what happened to them?

Scientific advances have allowed us to manipulate these codes and today we are very close to being able to “produce designer babies,” which has generated serious ethical questions. I don’t know if it’s possible to hope that one day that manipulation will produce babies born with the characteristics of businesspeople [2] and/or entrepreneurs, which would represent a tremendous savings in university careers and training courses, as well as a rise in unemployment among those who make a living from it. Something not very good for someone like me, for example. But we are still far from such an innovative event.

No, people are not born as businesspeople!, although undoubtedly the vocation, innate ability, certain attitudes, talent and behavior patterns “not acquired”, the family environment and some other personality traits, play their role.

There are also other environmental factors that help, induce, provoke, favor, facilitate, the transformation of the common homo sapiens into homo sapiens empresarius.

Obviously there is the homo sapiens empresarius cubanus subspecies, about which there have been doctoral thesis and masters, handbooks and methodologies for the training of businesspeople in Cuba, even novels, humor programs…, sometimes humorous.

Now that we have 3G and even 4G it is very easy to find the infinite amount of definitions of their attributes and what businesspeople do. Each teacher who dedicates himself to this subject has his own definition or shares some enriching or impoverishing it with his own adaptations.

However, at the University of Havana, a very dear colleague of mine, a co-worker at the Center for Studies on the Cuban Economy, with many years of work in situ with Cuban enterprises who leads the Innovation and Entrepreneurship Network, is tired of sustaining the idea that entrepreneurs are not exclusive to a sector or form of ownership and constantly repeats that there are entrepreneurs in the state sector in the same way as there are in the non-state sector. Sometimes she is able to get them to understand and accept her point of view.

The obsession with finding opportunities and the ability to identify them is something very characteristic of entrepreneurship, perhaps its most defining distinctive feature and this goes hand in hand with the willingness to take risks and the attitude to recover from failures. Turning those opportunities into a good business is what makes the entrepreneur a good businessperson. [3] Generating a business environment that facilitates that purpose is the task of governments and possibly one of the most important.

In fact, the reality we’re living today demonstrates it almost daily. There are true businesspeople in our state sector, men and women with a nose for opportunity who have known how to jump many hurdles, fight and convince the bureaucracy, overcome prejudices and suspicions, even risking their position and the consideration of their superiors.

It is also an irrefutable truth that a great many of the successful cooperative and private entrepreneurs that we have as part of the non-state sector were formerly directors or managers of state-owned enterprises. At some point in their lives a metamorphosis occurred, a piece of the protein chain of their DNA was replaced by another and they also found a different environment than the one they had in the state sector.

The businessperson as an agent of change is a figure that appears very clearly in the work of Joseph Schumpeter. It is that person who looks for opportunities to obtain benefits from generating new combinations of processes, products or services and who obtains with that a momentary advantage that allows him/her to increase participation in the market and obtain extraordinary profits. That quality, that of being a businessperson, has nothing to do with the form of ownership of the enterprise. You can be an owner and a businessperson or you can be a salaried owner. In that version, the Schumpeter version, the businessperson is primarily an AGENT OF CHANGE.

What a coincidence. Today, the government’s leadership is asking the same thing from Cuban businesspeople, to be agents of change, to identify opportunities (to export, to replace imports, to increase the participation of their products in the national market) and take advantage of them. Of course, for this you have to let the businessperson be a businessperson.

But let’s go back to the phrase I quoted at the beginning. In itself it contains a dichotomy between what we know in Cuba as an “enterprise director” (state) and a “businessperson.”

Undoubtedly we have many enterprise directors who are not strictly speaking businesspeople, who focus more on the management and control of processes than on the identification of opportunities and generation of new goals. A great many of them are, without doubt, the product of the circumstances in which they were trained as individuals and as managers, characterized by excessive verticality in decision-making, enterprises’ limited freedom of action, highly centralized management of resources from the central levels, formal participation in strategic decision-making, subordination of the enterprise’s strategy to the operational determined by the plan, passive nature of the financial and banking system, high controls, excess of norms and positive regulations (this is : only what has been oriented can be done), non-incentivizing incentives, etc. Thus, our businesspeople and our enterprise executives have to travel the most difficult of all paths, unlearning.

They will do so especially if it is possible to create this “business environment” that, at the same time as it encourages and forces them to arm themselves with new attitudes and skills, also involves learning and improving the system of incentives. [4] 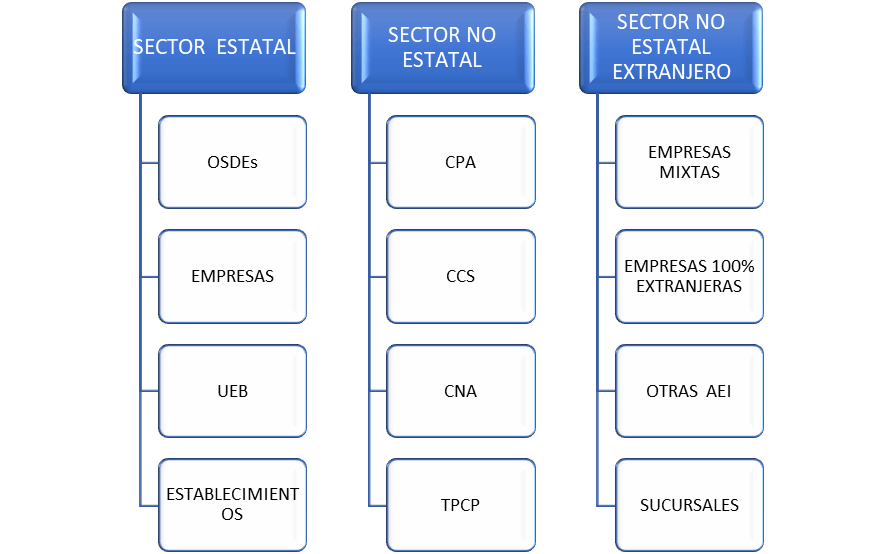 There are, therefore, different kinds of obstacles: those that are generated within each subsystem and are somehow specific to them. For example, how many circulars issued by a Higher Business Management Organization (OSDE) or an enterprise hinder their own work or of a Basic Business Unit.

There are others that affect all subsystems, such as laws, decrees-laws or decrees (or parts thereof) from national regulatory organizations and that hinder the purposes of reaching new markets, improving productivity, etc.

Thus, there are two approaches, one vertical, which would be the one described first and the other transversal, that would allow us to find that common minimum that multiplies the difficulties and that is present in the three subsystems because it is not enough to unlock the obstacles that block our state-owned enterprises. Actually, it is necessary to unlock those that affect the Cuban business system as a whole, as it is the only way to effectively achieve those chains that all decision makers are asking for today.

Identifying what are the obstacles common to all of them and eliminating them [5] could facilitate this aspiration that the country’s President has repeated over the last months.

Cuba needs businesspeople and also real enterprises, not only in the state sector, but it also needs good directors and managers. Being able to implant that new piece of DNA that leads to the necessary mutation, there is the matter.

[1] In the 1980s we came to have a Higher Institute of Economy Management that formed enterprise executives with subsidiaries in each of the country’s fourteen provinces.

[2] The concept of businessperson and the very businessperson has been going on for more than 400 years. It embodies the separation between the property of the enterprise and who is in charge of managing it without being its owner and in its modern version it is the product of a financial innovation made in Holland back in the 17th century by a Scotsman named John Law, father of limited shares.

[3] Intrigued by the success of a good friend, I once asked him how he had become such a successful businessman, his response was a revelation; “Juan, he told me, before succeeding in this business that I now manage, I failed 11 times and lost two marriages.” What a combination of obsession and willpower. Of course, in the culture in which it took place, failure is part of the natural path to success and taking risks is not forbidden.

[4] The excess of norms has characterized and conditioned the performance of our business universe; laws, decree-laws, decrees, circulars, memoranda, and other non-written ones. Just in the case of self-employment, in 2010 to date more than 600 regulations of different categories have been issued. It would be good to know how many our state enterprises have to endure.

[5] Should the system that produces the country’s wealth be adapted to the norm or should the norm be adapted to the purposes of that system? This may be a rhetorical question for some, but in my opinion the definition of any new norm (law, decree-law, decree, etc.) that affects our business universe as a whole should preside.