Developing a "real export will" is not the same as trying to export in a strong-willed way. 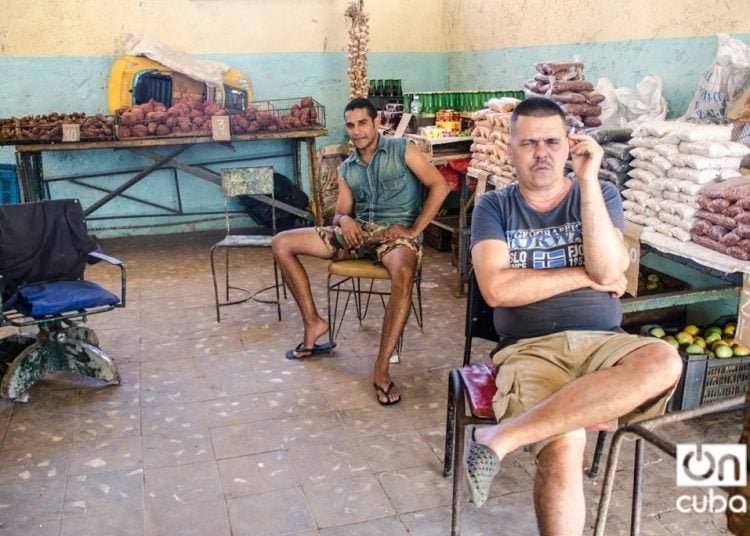 No, I am not at all promoting the idea of ​​creating another ministry in Cuba, the Ministry of Development or the development promotion agency. There are already too many, in my opinion.

But the word control continues preceding any debate about the national economy. Actually, it’s not a whim. The work of the Comptroller General of the Republic has shown how ineffective many of our so-called control systems are.

It is also true that when the cost of the control exceeds the cost of what is controlled then it ceases to make sense, at least from the economic point of view, and is pointing out the need to review these “incentives.”

That is why I believe that the words of the day are those that are included in the title of this article.

Export, attract foreign investment, replace imports, make the investment process efficient, achieve a good return on investment funds, produce food, are all these words or phrases that we hear every day, from the speeches of the country’s main leaders to any of the national media stories.

All are great purposes, all cannot be postponed, if we wish at some time, sooner rather than later, to get out of the very delicate situation facing the country today. All have as a correlate these words: encourage, promote, facilitate and in the end everything sums up to incentives appropriate for the set purposes.

Creating an “export mentality” in a country that has long been relatively detached from the “outside world” and the rules of the international market in the field of exports will not be a short-term task. It should be brought to mind that almost 80 percent of our exports are concentrated today in no more than eight products and probably in about ten or twelve exporting enterprises.

Of those products, nickel and cobalt, or a significant part of both, is exported by a joint venture, in the case of rums and cigars as well. Remaining would be sugar and biotechnological products, both in the hands of national enterprises if I’m not mistaken.

Creating an export mentality also requires creating an innovative mentality at the level of the “national industry,” understood not as the strictly industrial activity, but as all those productive activities, including the agricultural sector, and services that in one way or another contribute to production and supply.

From this perspective, the “national industry” is not only made up of state-owned enterprises, but also of all those other enterprises that we call “non-state sector” and which would also include agricultural and livestock cooperatives and credit and service cooperatives, since without the latter we would be leaving primary food production out of the “national industry.”

Exporting requires “competing” with other enterprises outside of Cuba. Is it possible to compete externally and minimize competition in the domestic market?

My hypothesis is that, without an environment of adequate internal competition, the “task” of exporting will be much more difficult. “Competition” is vital to promote the quality of our products and our services and also to drive innovation. This does not mean giving up providing certain conditions to the national enterprises so that they can reach new markets or introduce a new product, quite the opposite.

Developing a “real export will” is not the same as trying to export in a strong-willed way.

Exporting also requires a regulatory framework that facilitates export and promotes it. Sometimes it is hard to achieve that balance. For example, when reading the resolution that regulates the technological requirements that must be complied with in the production for export and for the national market of Cuban rums (Resolution No. 12/2019, GOC-2019-248-O16), in its fourth section it stipulates that: “It is not mandatory to declare the age on the labels; however, when it is declared it will be done according to the age of the youngest alcoholic component of the mixture.”

Declaring the age of a rum is part of its “natural marketing.” If the aged rums are produced by mixing younger rums with older rums, then on the labels of some of our aged rums the age of the youngest of its components will have to appear, will this affect our emblematic aged rums, for example, an aged Santiago 11 years, compared to other foreign rums that don’t have to comply with this regulation in their respective countries? Are we by chance not making it very easy for Bacardi? I repeat it is a doubt, but I worry that rum being one of our leading exports may be affected in its “competition” compared to other similar products because of a regulation that, recognizing its good purposes, puts us at a disadvantage with regards to competitors. I reiterate again that this matter is mostly a suspicion.

Think of tourism, a sector that every day we repeat must be one of the driving forces of the national economy; a sector that already demonstrated, some time ago, that it could play that role. Today it has to directly face a very competitive environment and in addition to that with the aggravating factor of Mr. Trump’s direct hostility.

Promoting Cuba as an investment destination in the tourism business goes through a lot of aspects. From the airport infrastructure, to the migration and customs facilities and, above all, the value for money in tourism services and products compared to its closest competitors in the Caribbean.

In hotel construction the ground is essential. The price of land is a factor that encourages or discourages investors. The land in Cuba is not sold, the right of usufruct is transferred for a certain period of time. The prices at which future investors must acquire that right are regulated by Resolution No. 1095/2017 (1). It sets the value of the land at the tourist destinations and establishes a calculation coefficient based on the time (duration) of the planned exploitation.

Today Cuba needs more investors in tourism. One way to promote investment could be by reviewing those rates for usufruct rights, which may be a factor against our competitiveness. To have an idea I reproduce below the prices per square meter of urban land in some regions of Spain. Attention, because in this case it is a “sale,” not a transfer of the right of usufruct: 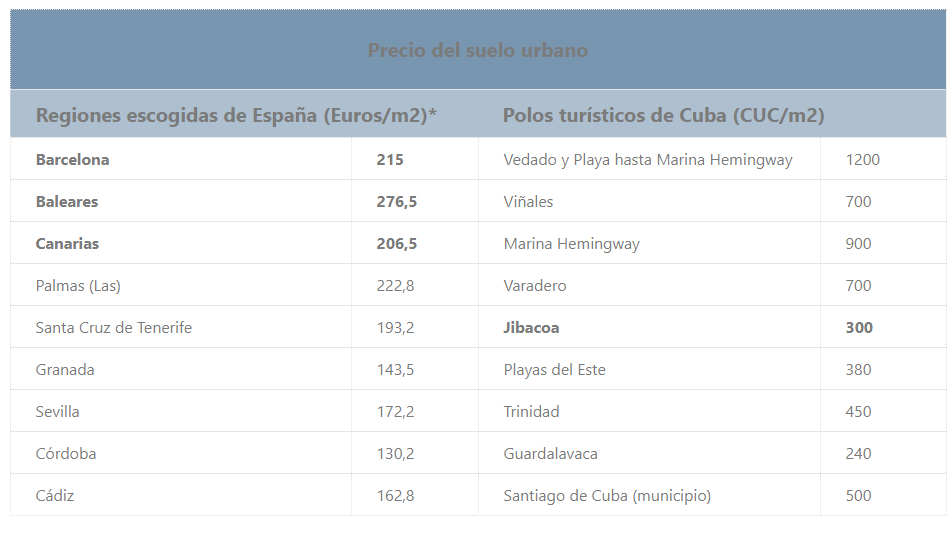 Vedado = Vedado and Playa up to Hemingway Marina

* In the case of Spain, it is urban land, with all the infrastructure conditions necessary for construction. It is the price for sale of the land.

It is true that the value of the land is, at times, the fundamental component of the contribution of the Cuban side to the joint venture and that with that it ensures a certain participation in the shares of the new venture. But the current situation in the country is somewhat different from the year in which Resolution 1095 was issued.

Today we need more investors. Reconsidering the price of the right to use land could be something that could contribute to attracting new business for the sector. Modifying it is not a decision of the Ministry of Tourism, it goes beyond its powers. But if under the current circumstances we want to have more investors in this sector, or in others, we should look for better incentives.

Something similar occurs with that other part of the national industry that is not state run and that is largely small and medium-sized industry. Its capacity to generate employment is indisputable, as well as its impact at the territorial level. Today, when all Cubans are urged to produce, to export, to replace imports.

I believe it is more necessary than ever to achieve a legislation on small and medium-sized enterprises that gives many Cubans who today produce and provide services in the country greater legal security and substantially reduces the uncertainty in which they carry out their activities.

On more than one occasion, President Díaz-Canel has insisted on the need to achieve linkages between the state enterprise, the foreign enterprise and the non-state sector. It is necessary to create the incentives for this, in the same way that it’s essential to abandon those that for years have represented obstacles to achieve the business fabric we need. Supporting these small industries, which can be a decisive link in the Cuban business fabric, is also part of the effort to be more independent.

Encourage, promote, facilitate should be the words of the day. Today we have private workers who export their products in suitcases and import their supplies in the same way, and even sell there, outside Cuba, in places where, by virtue of a law without any support, we are banned from selling any product.

That other force that comprises more than 600,000 self-employed workers, part of whom would become small and medium-sized entrepreneurs and a great deal of non-agricultural cooperatives, also needs better incentives to integrate into large production, that of state-run enterprises. Incentives suitable for the purpose of having a less dependent country, that’s what it’s about.

Exporting, attracting foreign investment, replacing imports, making the investment process efficient, achieving a good return on investment funds, producing food, are all purposes that need not only the encouragement and commitment of all Cubans. They also need adequate and consistent incentives for that purpose.

(1) By the way, the prices for the use of land in several of the country’s cities, Matanzas, Santa Clara, Camagüey, Holguín (municipality), Baracoa, Guantanamo, etc., do not appear in that resolution. However, the need to develop and expand city tourism is recognized.

Russia closes ranks with Cuba and Venezuela against U.S. "impositions"